Hunter S. Thompson Sends a Letter to the Indianapolis Colts, Urging Them to Pick Ryan Leaf Over That “Peyton Manning Kid” (1998) 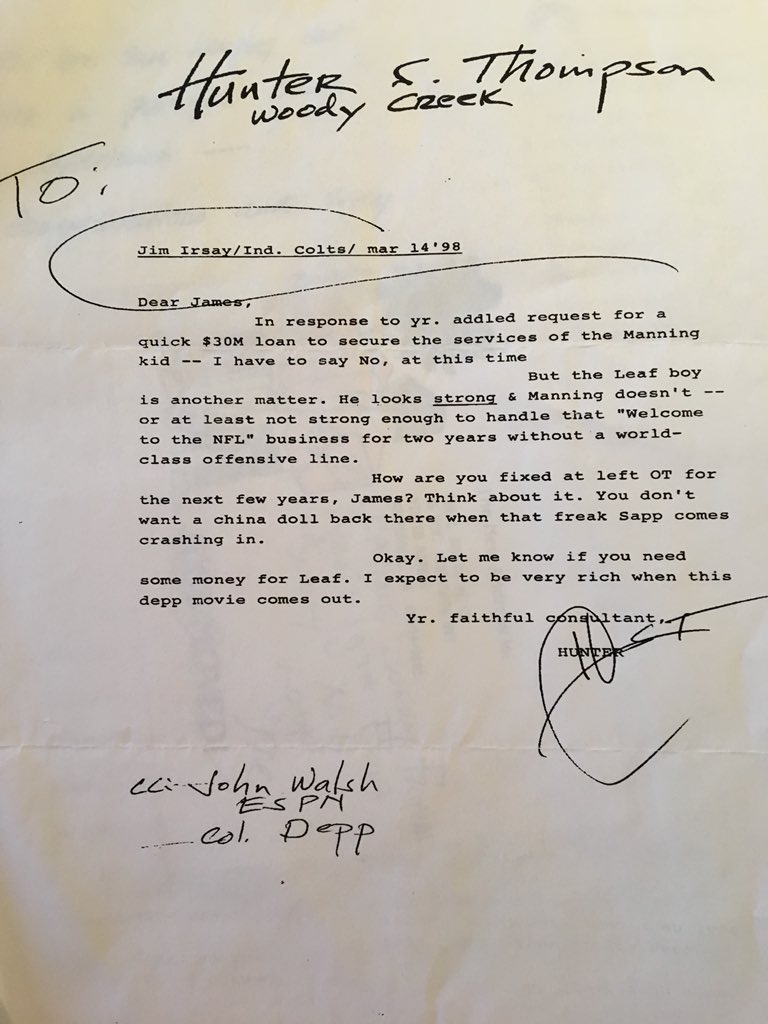 The 1998 NFL draft was a memorable one. A debate raged around whether the Indianapolis Colts should use their first round pick to select Ryan Leaf or Peyton Manning. Everyone had an opinion about these two quarterbacks, including Hunter S. Thompson. The author of Fear and Loathing in Las Vegas and Hell's Angels sent a letter to Colts owner Jim Irsay, urging him to select the highly-touted Leaf.

In response to yr addled request for a quick $30M loan to secure the services of the Manning kid — I have to say No, (sic) at this time

But the Leaf boy is another matter. He looks strong & Manning doesn’t — or at least not strong enough to handle that “Welcome to the NFL” business for two years without a world-class offensive line.

How are you fixed at left OT for the next few years, James? Think about it. You don’t want a china (sic) doll back there when that freak [Warren] Sapp comes crashing in.

Okay. Let me know if you need some money for Leaf. I expect to be very rich when this [Johnny] depp (sic) movie comes out.

Twenty years later, we know how things played out. The Colts ultimately picked Manning, who became one of the most productive and celebrated quarterbacks ever. As for Leaf, he played four seasons and exited the sport, considered by some the No. 1 "draft bust" in NFL history. But he's certainly a good sport. Leaf posted Thompson's letter (above) on his Twitter stream last month.