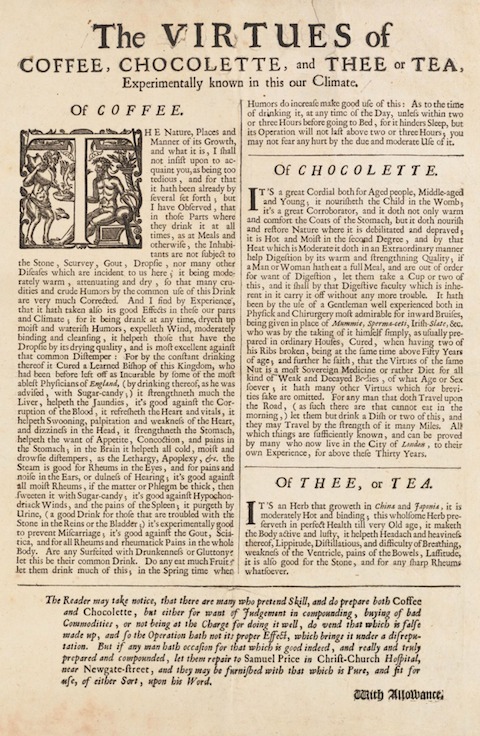 According to many historians, the English Enlightenment may never have happened were it not for coffeehouses, the public sphere where poets, critics, philosophers, legal minds, and other intellectual gadflies regularly met to chatter about the pressing concerns of the day. And yet, writes scholar Bonnie Calhoun, “it was not for the taste of coffee that people flocked to these establishments.”

Indeed, one irate pamphleteer defined coffee, which was at this time without cream or sugar and usually watered down, as “puddle-water, and so ugly in colour and taste [sic].”

No syrupy, high-dollar Macchiatos or smooth, creamy lattes kept them coming back. Rather than the beverage, “it was the nature of the institution that caused its popularity to skyrocket during the seventeenth and eighteenth centuries.”

How, then, were proprietors to achieve economic growth? Like the owner of the first English coffee-shop did in 1652, London merchant Samuel Price deployed the time-honored tactics of the mountebank, using advertising to make all sorts of claims for coffee’s many “virtues” in order to convince consumers to drink the stuff at home. In the 1690 broadside above, writes Rebecca Onion at Slate, Price made a “litany of claims for coffee’s health benefits,” some of which “we’d recognize today and others that seem far-fetched.” In the latter category are assertions that “coffee-drinking populations didn’t get common diseases” like kidney stones or “Scurvey, Gout, Dropsie.” Coffee could also, Price claimed, improve hearing and “swooning” and was “experimentally good to prevent Miscarriage.”

Among these spurious medical benefits is listed a genuine effect of coffee—its relief of “lethargy.” Price’s other beverages—“Chocolette, and Thee or Tea”—receive much less emphasis since they didn’t require a hard sell. No one needs to be convinced of the benefits of coffee these days—indeed many of us can’t function without it. But as we sit in corporate chain cafes, glued to smartphones and laptop screens and mostly ignoring each other, our coffeehouses have become somewhat pale imitations of those vibrant Enlightenment-era establishments where, writes Calhoun, “men [though rarely women] were encouraged to engage in both verbal and written discourse with regard for wit over rank.”