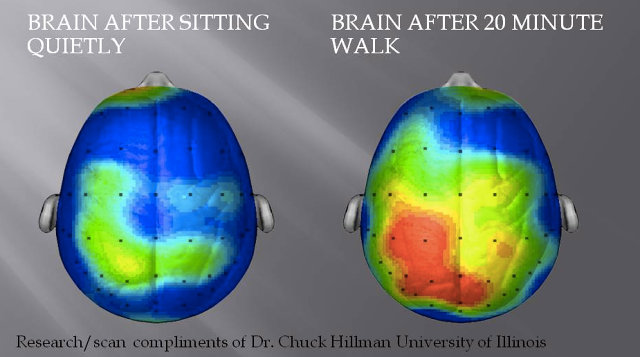 In the United States and the UK, we’ve seen the emergence of a multibillion-dollar brain training industry, premised on the idea that you can improve your memory, attention and powers of reasoning through the right mental exercises. You’ve likely seen software companies and web sites that market games designed to increase your cognitive abilities. And if you’re part of an older demographic, worried about your aging brain, you’ve perhaps been inclined to give those brain training programs a try. Whether these programs can deliver on their promises remains an open question–especially seeing that a 2010 scientific study from Cambridge University and the BBC concluded that there’s “no evidence to support the widely held belief that the regular use of computerised brain trainers improves general cognitive functioning in healthy participants…”

And yet we shouldn’t lose hope. A number of other scientific studies suggest that physical exercise–as opposed to mental exercise–can meaningfully improve our cognitive abilities, from childhood through old age. One study led by Charles Hillman, a professor of kinesiology and community health at the University of Illinois, found that children who regularly exercise, writes The New York Times:

displayed substantial improvements in … executive function. They were better at “attentional inhibition,” which is the ability to block out irrelevant information and concentrate on the task at hand … and had heightened abilities to toggle between cognitive tasks. Tellingly, the children who had attended the most exercise sessions showed the greatest improvements in their cognitive scores.

If you’re looking to get the gist of how exercise promotes brain health, it comes down to this:

That’s how The Chicago Tribune summarized the findings of a 1995 study conducted by researchers at the University of California-Irvine. You can get more of the nuts and bolts by reading The Tribune’s recent article, The Best Brain Exercise May be Physical. (Also see Can You Get Smarter?)

You’re perhaps left wondering what’s the right dose of exercise for the brain? And guess what, Gretchen Reynolds, the phys ed columnist for The Times’ Well blog, wrote a column on just that this summer. Although the science is still far from conclusive, a new study conducted by The University of Kansas Alzheimer’s Disease Center found that small doses of exercise could lead to cognitive improvements. Writes Reynolds, “the encouraging takeaway from the new study … is that briskly walking for 20 or 25 minutes several times a week — a dose of exercise achievable by almost all of us — may help to keep our brains sharp as the years pass.”

The Neuronal Basis of Consciousness Course: A Free Online Course from Caltech