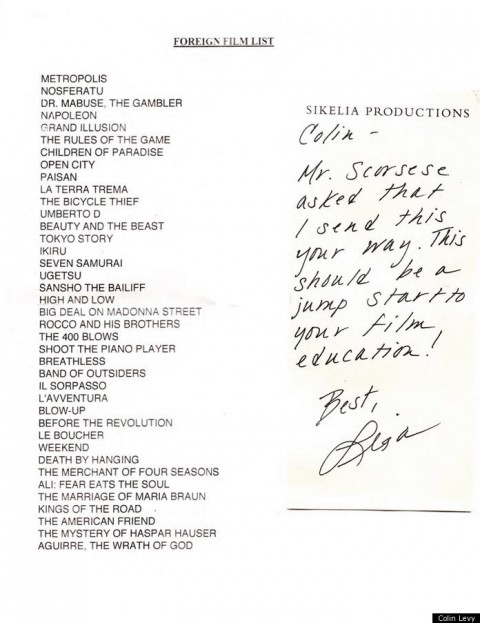 Eight or so years ago, young filmmaker Colin Levy got an opportunity of a lifetime. He got a one-on-one meeting with Martin Scorsese. After spending much of his time in high school making a five-minute short, Levy won the national YoungArts award — and, with it, the chance to chat with the guy who directed Goodfellas, Taxi Driver and Raging Bull.

After getting a personal tour of Scorsese’s office and editing bays by none other than legendary editor Thelma Schoonmaker, Levy met the man himself. “It was a defining moment in my path as a filmmaker,” he later wrote on his blog.

Martin Scorsese was intimidating, to say the least. But very jovial, very talkative, and he took me seriously. (Or convinced me, at least.) I pretty much kept my mouth shut. Every 30 seconds he would mention an actor, producer, director or film title I had never heard of before. I was stunned just to be in his presence. He liked my film, he said. “How did you do the little creatures?” I tried to explain how I figured out the basics of 3D animation. His eyes lit up and he started talking about the digital effects in The Aviator.

The juxtaposition of scales was overpowering. I felt like I was in a movie. Why he spent so much time with me I do not know, but it was amazing just to be in his presence. A few weeks afterwards I labored over a thank-you card, in which I expressed the overwhelming impression I had gotten that I don’t know enough about anything. I specially don’t know enough about film history and foreign cinema. I asked if he had any suggestions for where to start.

A couple weeks later, Scorsese’s assistant sent him a handful of books and 39 foreign movies personally picked by the filmmaker. “Mr. Scorsese asked that I send this your way,” his assistant wrote to Colin. “This should be a jump start to your film education!”

Scorsese’s selections – which you can see above – are a fascinating insight into what influenced the filmmaker. Several movies are perennial film school classics: Italian neorealist masterpieces like the Bicycle Thief and Umberto D pop up on the list along with groundbreaking French New Wave works like 400 Blows and Breathless. More unexpected is surprisingly strong showings of both Japanese post-war movies and New German cinema. Both Akira Kurosawa and Rainer Werner Fassbinder get three films each. And while there are some rather eccentric, unexpected inclusions in the list–Rocco and his Brothers? Il Sorpasso? Death by Hanging? – there are also some pretty striking omissions; big name art house figures like Ingmar Bergman, Robert Bresson and most surprisingly Federico Fellini didn’t make the cut. In any case, as Scorsese’s assistant writes, this list is a great place to start for anyone looking to learn more about foreign film.

At least the first few films on the list you will find in our collection, 4,000+ Free Movies Online: Great Classics, Indies, Noir, Westerns, Documentaries & More.