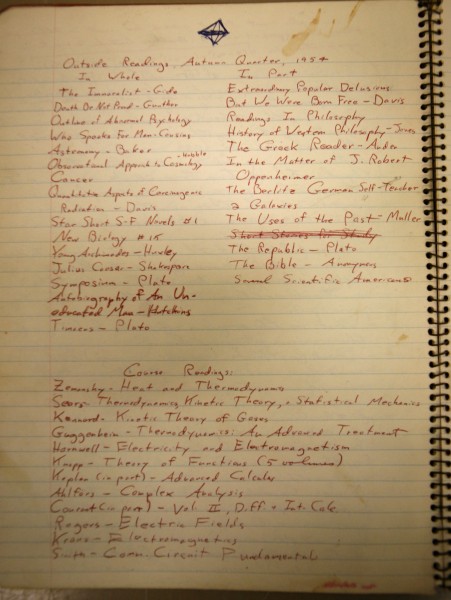 Earlier this year, we brought you Neil de Grasse Tyson’s List of 8 (Free) Books Every Intelligent Person Should Read. The list generated a lot of buzz and debate. Indeed you, the readers, contributed 133 comments to the post, a record for us. Given your enthusiasm, you might want to check this out — a newly-discovered reading list from the man who mentored Tyson as a youth and laid the foundation for Tyson’s current role as public scientist/intellectual. Yes, we’re talking about Carl Sagan.

Last month, The Library of Congress acquired a collection of Carl Sagan’s papers, which included Sagan’s 1954 reading list from his undergrad days at The University of Chicago. There are some heady scientific texts here, to be sure. But also some great works from the Western philosophical and literary tradition.

If you want to participate in the same intellectual tradition, we suggest visiting our previous post, The Harvard Classics: A Free, Digital Collection, which puts 51 volumes of essential works right at your fingertips.

You can view Sagan’s list in a large format here.