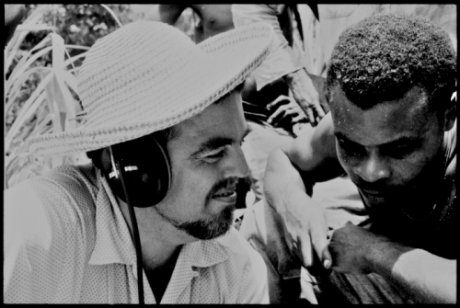 A huge treasure trove of songs and interviews recorded by the legendary folklorist Alan Lomax from the 1940s into the 1990s have been digitized and made available online for free listening. The Association for Cultural Equity, a nonprofit organization founded by Lomax in the 1980s, has posted some 17,000 recordings.

“For the first time,” Cultural Equity Executive Director Don Fleming told NPR’s Joel Rose this week, “everything that we’ve digitized of Alan’s field recording trips are online, on our Web site. It’s every take, all the way through. False takes, interviews, music.”

It’s an amazing resource. For a quick taste, here are a few examples from one of the best-known areas of Lomax’s research, his recordings of traditional African American culture:

But that’s just scratching the surface of what’s inside the enormous archive. Lomax’s work extended far beyond the Deep South, into other areas and cultures of America, the Caribbean, Europe and Asia. “He believed that all cultures should be looked at on an even playing field,” his daughter Anna Lomax Wood told NPR. “Not that they’re all alike. But they should be given the same dignity, or they had the same dignity and worth as any other.”

You can listen to Rose’s piece about the archive on the NPR website, as well as a 1990 interview with Lomax by Terry Gross of Fresh Air, which includes sample recordings from Woody Guthrie, Jelly Roll Morton, Lead Belly and Mississippi Fred McDowell. To dive into the Lomax audio archive, you can search the vast collection by artist, date, genre, country and other categories, or go to the Sound Collections Guide for easy browsing.