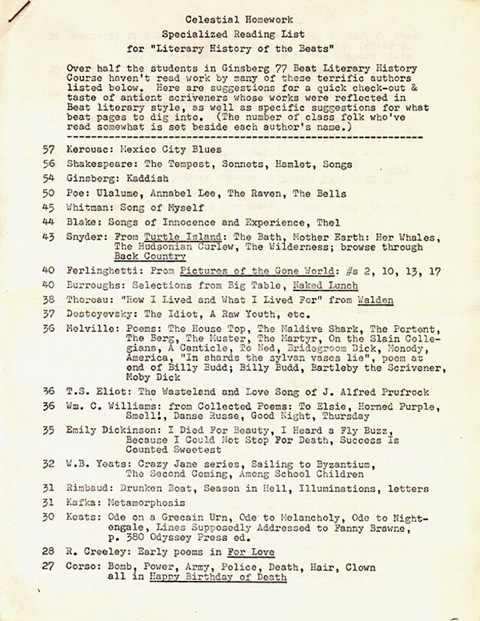 “Argh, you’re all amateurs in a professional universe!” roared Allen Ginsberg to a young class of aspiring poets in 1977 at the Jack Kerouac School of Disembodied Poetics. Their offense? Most of the students had failed to register for meditation instruction. The story comes to us from Steve Silberman, who was then a 19-year-old student in that classroom and a recipient of Ginsberg’s genius that summer.

Ginsberg taught at Naropa until his death in 1997. The class in which he had his outburst was called “Literary History of the Beats,” at the start of which he handed his students a list called “Celestial Homework” (first page above, second and third pages here and here). Silberman describes the list thus (quoting from Ginsberg’s description):

This “celestial homework” is the reading list that Ginsberg handed out on the first day of his course as “suggestions for a quick check-out & taste of antient scriveners whose works were reflected in Beat literary style as well as specific beat pages to dig into.”

It’s a particularly Ginsberg-ian list, with a healthy mix of genres and periods, most of it poetry—by Ginsberg’s fellow beats, to be sure, but also by Melville, Dickinson, Yeats, Milton, Shelley, and several more. Sadly, it’s too late to sit at Ginsberg’s feet, but one can still find guidance from his “Celestial Homework,” and you can even listen to audio recordings from the class online too.

Silberman has done us all the great service of compiling as many free online versions of Ginsberg’s recommended texts as he could. You’ll find them all here, with author bios linked to each photo. Unfortunately, some of the links have gone dead, but with a little bit of searching, you can work your way through most of Ginsberg’s list. Silberman reports another Ginsberg epigram from his 1977 class: “Poetry is the realization of the magnificence of the actual.” The works on the “Celestial Homework,” Silberman comments, “are gates to that magnificence.”