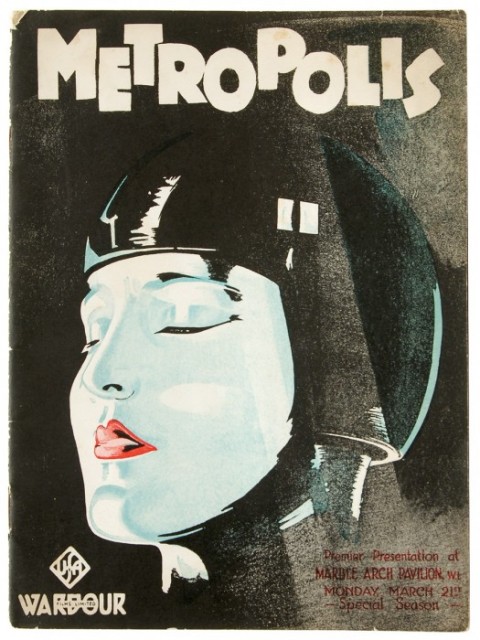 Today we bring you one of the most influential films of all time: Fritz Lang’s 1927 fable of good and evil fighting it out in a futuristic urban dystopia, Metropolis.

The melodrama is set in the year 2026. Metropolis is a beautiful high-tech city, but beneath the dazzling surface toil masses of enslaved workers. To keep the machinery running efficiently, the workers have been forced to become virtual machines themselves. The city is ruled by a heartless mastermind named Johann Fredersen, whose idealistic son, Freder, discovers the cruel conditions imposed on the workers and rebels against his father.

Freder falls in love with Maria, a messianic figure preaching love and reconciliation, but his father hatches an evil plot to turn the workers against Maria. He hires the mad scientist Rotwang to make a robotic counterfeit of Maria to wreak havoc among the workers, discrediting her and discouraging rebellion. An epic struggle ensues.

Lang actually detested the story, which was written mostly by his wife Thea Von Harbou. He told Peter Bogdanovich that Metropolis was “silly and stupid.” But from a visual standpoint the film is one of the great works of 20th century art. Lang said he got the idea of making a movie about a futuristic city while visiting New York in 1924. Standing at night on the deck of his ship in New York Harbor, the filmmaker looked up and was amazed:

I saw a street lit as if in full daylight by neon lights and, topping them, oversized luminous advertisements moving, turning, flashing on and off, spiraling…something that was completely new and nearly fairy tale-like for a European in those days….The buildings seemed to be a vertical veil, shimmering, almost weightless, a luxurious cloth hung from the sky to dazzle, distract, and hypnotize. At night the city did not give the impression of being alive; it lived as illusions lived. I knew then that I had to make a film about all of these sensations.

The iconic poster image above is reproduced from an extremely rare program printed for the March 21, 1927 London premiere of Metropolis. You can look through the entire 32-page program at the Web site of bookseller Peter Harrington. The page will open in a new window, so you can look at the program and stay here and watch the film.

There’s also a 2010 restoration of the film, supervised by the F.W. Murnau Foundation, which incorporates footage from an early print discovered in Buenos Aires, bringing the film closer to Lang’s original vision. You can purchase a restored copy with full English subtitles here.