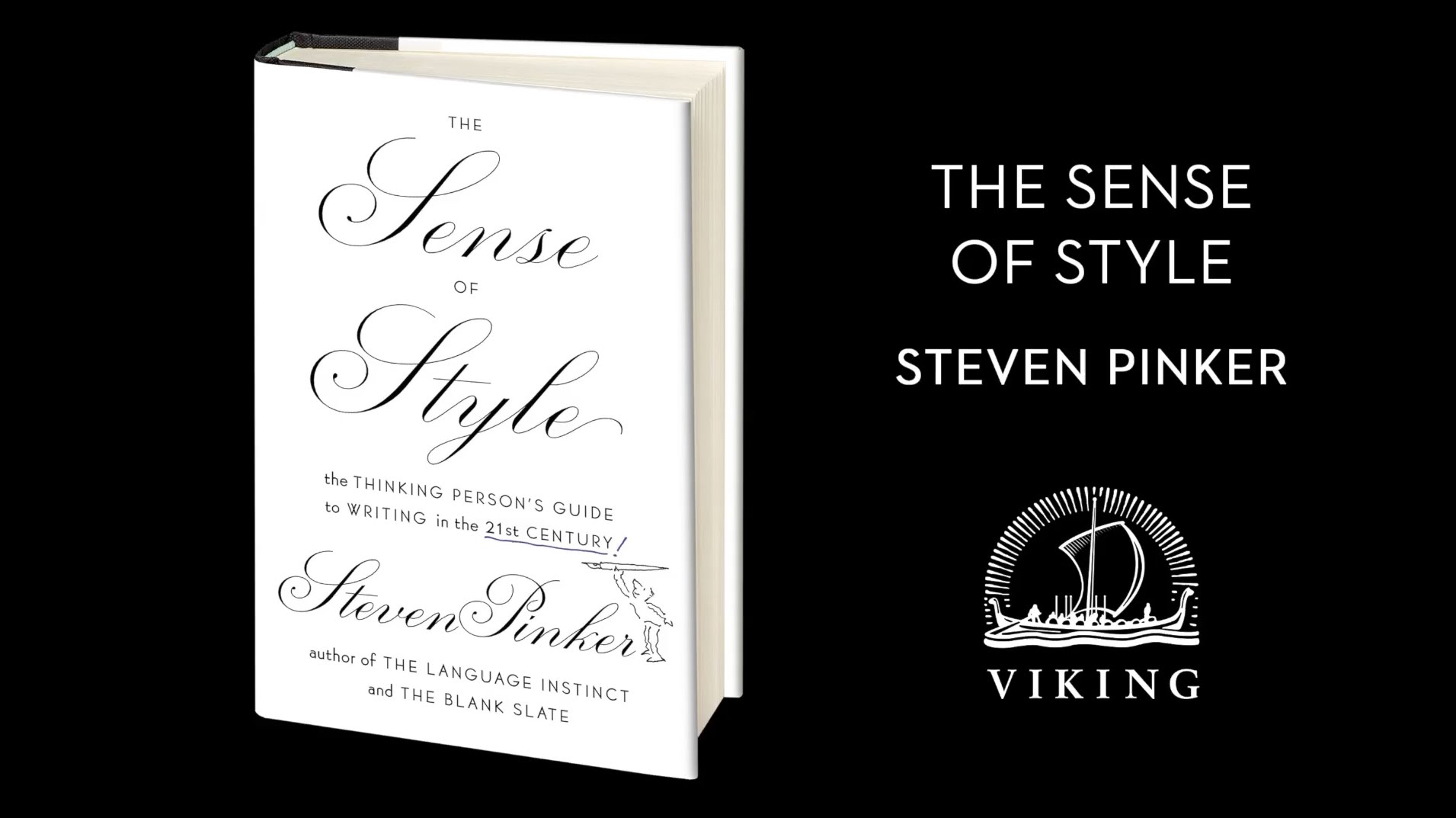 We’ve previously featured Harvard cognitive scientist Steven Pinker discussing writing at a Harvard conference on the subject. In that case, the focus was narrowly on academic writing, which, he has uncontroversially claimed, “stinks.” Now—“not content with just poaching” in the land of the scribes, writes Charles McGrath at The New York Times Sunday Book Review—Pinker has dared to “set himself up as a gamekeeper” with a new book—The Sense of Style: The Thinking Person’s Guide to Writing in the 21st Century. The grandiose title suggests to McGrath that the scientist intends to supplant that most venerable, and most dated, classic writer’s text by Strunk and White. He’s gone from chiding his fellow scholars to writing prescriptions for us all.

But if this seems out of bounds, wait until you hear what he suggests. Instead of issuing even more seemingly arbitrary, burdensome commands, Pinker aims to free us from the tyranny of the senseless in grammar—or, as he calls it in an article at The Guardian, from “folklore and superstition.” Below are five of the ten “common issues of grammar” Pinker selects “from those that repeatedly turn up in style guides, pet-peeve lists, newspaper language columns and irate letters to the editor.” In each case, he explains the absurdity of strict adherence and offers several perfectly reasonable exceptions that require no correction to clarify their meaning.

We have almost certainly all been taught in some fashion or another that this is a no-no. “That’s because teachers need a simple way” to teach children “how to break sentences.” The “rule,” Pinker says, is “misinformation” and “inappropriate for adults.” He cites only two examples here, both using the conjunction “because”: Johnny Cash’s “Because you’re mine, I walk the line,” and the stock parental non-answer, “Because I said so.” And yet (see what I did?), other conjunctions, like “and,” “but,” “yet,” and “so” may also “be used to begin a sentence whenever the clauses being connected are too long or complicated to fit comfortably into a single megasentence.”

Having taught English composition for several years, and thus having read several hundred scrambled student essays, I find this one difficult to concede. The dangling modifier—an especially easy error to make when writing quickly—too easily creates confusion or downright unintelligibility. Pinker does admit since the subjects of dangling modifiers “are inherently ambiguous,” they might sometimes “inadvertently attract a reader to the wrong choice, as in ‘When a small boy, a girl is of little interest.’” But, he says, this is not a grammatical error. Here are a few “danglers” he suggests as “perfectly acceptable”:

“Checking into the hotel, it was nice to see a few of my old classmates in the lobby.”

“Turning the corner, the view was quite different.”

“In order to contain the epidemic, the area was sealed off.”

I once had a student ask me if “whom” was an archaic affectation that would make her writing sound forced and unnatural. I had to admit she had an excellent point, no matter what our overpriced textbook said. In most cases, even if correctly used, whom can indeed sound “formal verging on pompous.” Though they seem straightforward enough, “the rules for its proper use,” writes Pinker, “are obscure to many speakers, tempting them to drop ‘whom’ into their speech whenever they want to sound posh,” and to generally use the word incorrectly. Despite “a century of nagging by prescriptive grammarians,” the distinction between “who” and “whom” seems anything but simple, and so one’s use of it—as with any tricky word or usage—should be carefully calibrated “to the complexity of the construction and the degree of formality” the writing calls for. Put plainly, know how you’re using “whom” and why, or stick with the unobjectionable “who.”

Oftentimes we find the most innocuous-sounding, common sense usages called out by uptight pedants as ungrammatical when there’s no seeming reason why they should be. The phrase “very unique,” a description that may not strike you as excessively weird or backward, happens to be “one of the commonest insults to the sensibility of the purist.” This is because, such narrow thinkers claim, as with other categorical expressions like “absolute” or “incomparable,” something either is or it isn’t, in the same way that one either is or isn’t pregnant: “referring to degrees of uniqueness is meaningless,” says the logic, in the case of absolute adjectives. Of course, it seems to me that one can absolutely refer to degrees of pregnancy. In any case, writes Pinker, “uniqueness is not like pregnancy […]; it must be defined relative to some scale of measurement.” Hence, “very unique,” makes sense, he says. But you should avoid it on aesthetic grounds. “’Very,’” he says, “is a soggy modifier in the best of circumstances.” How about “rather unique?” Too posh-sounding?

I breathed an audible sigh on encountering this one, because it’s a rule I find particularly irksome. Of note is that Pinker, an American, is writing in The Guardian, a British publication, where things are much more relaxed for these two relative pronouns. In U.S. usage, “which” is reserved for nonrestrictive—or optional clauses: “The pair of shoes, which cost five thousand dollars, was hideous.” For restrictive clauses, those “essential to the meaning of the sentence,” we use “that.” Pinker takes the example of a sentence in a documentary on “Imelda Marcos’s vast shoe collection.” In such a case, of course, we would need that bit about the price; hence, “The pair of shoes that cost £5,000 was hideous.”

It’s a reasonable enough distinction, and “one part of the rule,” Pinker says, “is correct.” We would rarely find someone writing “The pair of shoes, that cost £5,000…” after all. It probably looks awkward to our eyes (though I’ve seen it often enough). But there’s simply no good reason, he says, why we can’t use “which” freely, as the Brits already do, to refer to things both essential and non-. “Great writers have been using it for centuries,” Pinker points out, citing whoever (or “whomever”) translated that “render unto Caesar” bit in the King James Bible and Franklin Roosevelt’s “a day which will live in infamy.” QED, I’d say. And anyway, “which” is so much lovelier a word than “that.”

See Pinker’s Guardian piece for his other five anti-rules and free yourself up to write in a more natural, less stilted way. That is, if you already have some mastery of basic English. As Pinker rightly observes, “anyone who has read an inept student paper [um-hm], a bad Google translation, or an interview with George W. Bush can appreciate that standards of usage are desirable in many areas of communication.” How do we know when a rule is useful and when it impedes “clear and graceful prose?” It’s really no mystery, Pinker says. “Look it up.” It sounds like his book might help put things into better perspective than most writing guides, however. You can also hear him discuss his accessible and intuitive writing advice in the KQED interview with Michael Krasny above.

Steven Pinker: “Dear Humanists, Science is Not Your Enemy”