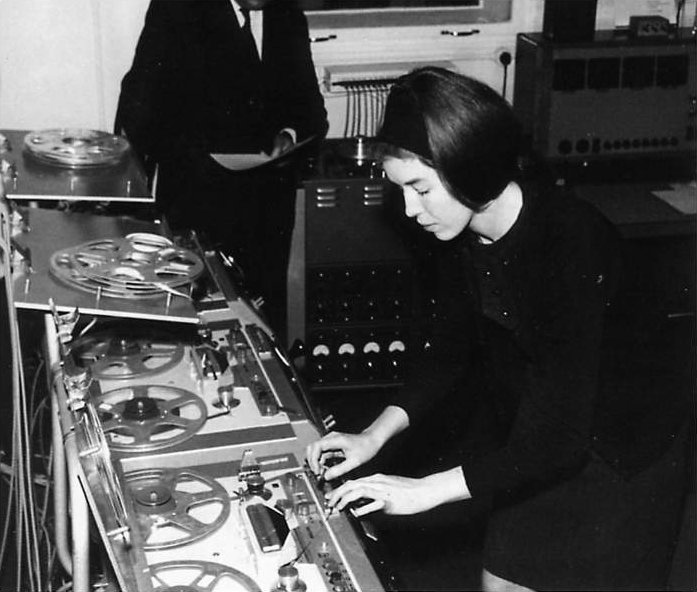 Two years ago, in a post on the pioneering composer of the original Doctor Who theme, we wrote that “the early era of experimental electronic music belonged to Delia Derbyshire.” Derbyshire—who almost gave Paul McCartney a version of “Yesterday” with an electronic backing in place of strings—helped invent the early electronic music of the sixties through her work with the Radiophonic Workshop, the sound effects laboratory of the BBC. She went on to form one of the most influential, if largely obscure, electronic acts of the decade, White Noise. And yet, calling the early eras of the electronic music hers is an exaggeration. Of course her many collaborators deserve mention, as well as musicians like Bruce Haack, Pierre Henry, Kraftwerk, Brian Eno, and so many others. But what gets almost completely left out of many histories of electronic music, as with so many other histories, is the prominent role so many women besides Derbyshire played in the development of the sounds we now hear all around us all the time.

In recognition of this fact, musician, DJ, and “escaped housewife/schoolteacher” Barbara Golden devoted two episodes of her KPFA radio program “Crack o’ Dawn” to women in electronic music, once in 2010 and again in 2013. She shares each broadcast with co-host Jon Leidecker (“Wobbly”), and in each segment, the two banter in casual radio show style, offering history and context for each musician and composer. Recently highlighted on Ubu’s Twitter stream, the first show, “Women in Electronic Music 1938-1982 Part 1” (above) gives Derbyshire her due, with three tracks from her, including the Doctor Who theme.

It also includes music from twenty one other composers, beginning with Clara Rockmore, a refiner and popularizer of the theremin, that weird instrument designed to simulate a high, tremulous human voice. Also featured is Wendy Carlos’s “Timesteps,” an original piece from her A Clockwork Orange score. (You’ll remember her enthralling synthesizer recreations of Beethoven’s 9th Symphony from the film).

The second show, above, fills in several gaps in the original broadcast and “could easily be six hours” says co-host Leidecker, given the sheer amount of electronic music out there composed and recorded by women over the past seventy years. This show includes one of our host Golden’s own compositions, “Melody Sumner Carnahan,” as well as music from Laurie Anderson and musique concrete composer Doris Hays. These two broadcasts alone cover an enormous range of stylistic and technological ground, but for even more discographical history of women in electronic music, see the playlist below, compiled by “Nerdgirl” Antye Greie-Ripatti for Women’s Day, 2014. Commissioned by Club Transmediale Berlin, the mix includes such well-known names as Yoko Ono, Bjork, and M.I.A., as well as foremothers Derbyshire and Carlos, and dozens more.

In lieu of the radio-show chatter of Golden and Leidecker, we have Greie-Ripatti’s post detailing each artist’s time period, country of origin, and contributions to electronic music history. Many of the composers represented here worked for major radio and film studios, scored feature films (like 1956’s Forbidden Planet), invented and innovated new instruments and techniques, wrote for orchestras, and passed on their knowledge as educators and producers. Greie-Ripatti’s page quotes a Danish electronic producer and performer saying “there is a lot of women in electronic music… invisible women.” Thanks to efforts like hers and Golden’s, these pioneering creators need no longer go unseen or, more importantly, unheard.