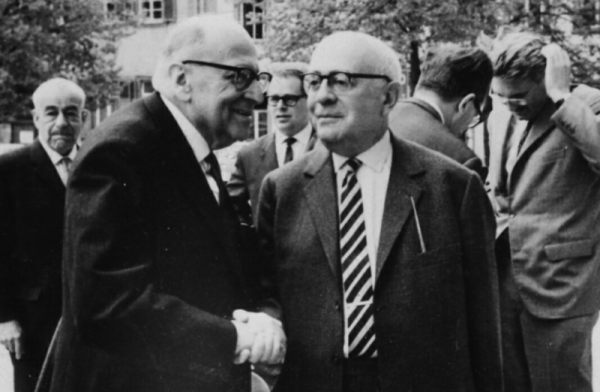 With the possible exception of John Gray’s Straw Dogs, few works of philosophy confront the barrenness of human life in the modern world in bleaker terms than Theodor Adorno’s Minima Moralia. Taking its title from Aristotle’s Magna Moralia, or “The Great Ethics,” Adorno’s book subverts the classical idea of the good life as a realistic aspiration in a world dominated by totalitarian systems of control and inexorable, grinding logics of production and consumption. “Our perspective of life has passed into an ideology which conceals the fact that there is life no longer,” writes Adorno in his Dedication. The individual has been “reduced and degraded” by capitalism and fascism, flattened to mere appearance in the “sphere of consumption.”

Adorno’s book—a philosophical memoir of his experience as an “intellectual in emigration”—reflects his pessimism not only in its title but also in its subtitle: Reflections from Damaged Life. How little he could have suspected—and how much he likely would have despised—the kinship between his own postwar angst and the neurotic anger of the American hardcore punk generation to come some thirty-five years later.

Take, for example these lyrics to Black Flag’s “Damaged,” from their 1981 album of the same name:

One might make the case that Black Flag lyrics—and those of so many similar bands—play out Adorno’s thesis over and over: to quote a much less angry pop band from a later generation: “Modern Life is Rubbish.”

Seizing on these pessimistic parallels between punk rock and critical theory, filmmaker and artist Brian J. Davis recorded an EP of readings from five chapters of Adorno’s book, set to blistering hardcore drums and guitars. (Anyone happen to know who is on vocals?) Above, hear “They, The People,” and “This Side of the Pleasure Principle” and below, we have “UNmeasure for UNmeasure,” “Johnny Head-in-the-Air,” and “Every Work is an Uncommitted Crime.”

As you’ll note, Adorno’s titles allude to well-known works of art, politics, folk song, and theory and—as the publisher’s note in my Verso edition puts it— “involve irony or inversion,” primary rhetorical methods of his “negative dialectic.” The hardcore punks who picked up, however unconsciously, on Adorno’s disaffected critique may have eschewed his self-consciously literary approach, but they were no less masters of irony, even if their targets happened to be much more pop-cultural.

Punk rock Adorno comes to us from WFMU’s Kenneth S as examples of “academic theory… sung by people who can’t sing.” As Colin Marshall pointed out in a post yesterday, Goldsmith has made his own contribution to the genre, singing writings by Walter Benjamin, Ludwig Wittgenstein, and Sigmund Freud. And to even more humorous effect, we’ve previously brought you the work of M.A. Numminen, Finnish performance artist who turned Wittgenstein’s Tractatus into a bizarre comic opera.

For a much more serious look at Adorno and music—a subject he wrote passionately and controversially about—check out this post on his own avant-garde compositions, which turn out to be much less punk rock than one might expect given his social alienation and despondency.