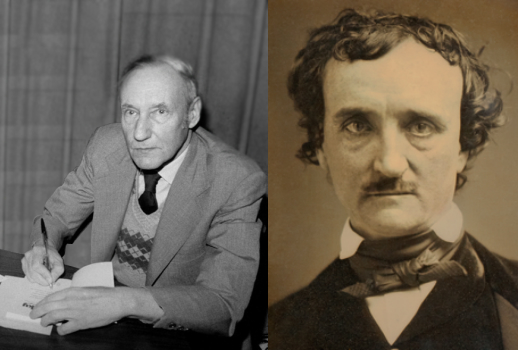 The label “American original” gets slapped onto a lot of different people, but it seems to me that, especially in the realm of letters, we could find no two luminaries who merit it more in the 19th century than psychological horror pioneer Edgar Allan Poe, and in the 20th century William S. Burroughs, sui generis even within the Beat Generation. So how could we resist featuring the recording just below, free to hear on Spotify (whose software, if you don’t have it yet, you can download here), of Burroughs reading Poe’s tale — because, as you know if you read him, he wrote not stories but tales — “The Masque of the Read Death”?

The 1842 tale itself, still haunting today more than 170 years after its publication, tells of a prince and his coterie of a thousand aristocrats who, in order to protect themselves from a Black Plague-like disease—the titular Red Death—sweeping through common society, take refuge in an abbey and weld the doors shut. In need of amusements (this all takes place about century and a half before Netflix, remember), the prince throws a masquerade ball. What, then, should interrupt this good time but the inexplicable arrival of an uninvited guest in a costume reminiscent of the corpse of a Red Death victim — possibly an embodiment of the Red Death itself?

Poe could tell a seriously resonant tale, and so could Burroughs. Though completely different in form, aesthetic, setting, and psychology, both writers’ works strike just the right ominous tone and leave just enough unexplained to seep into our subconscious in vivid and sometimes even unwanted ways. And so it makes perfect sense for Burroughs and his voice of a jaded but still amused ancient to join the formidable lineup of Poe’s interpreters, which includes Christopher Walken, Vincent Price, Christopher Lee, James Earl Jones, Iggy Pop, Lou Reed, and Stan Lee. But among them all, who better than Burroughs to articulate “The Masque of the Red Death’s” final line: “And Darkness and Decay and the Red Death held illimitable dominion over all.”

You can hear more of Burroughs reading Poe, in performances recorded for the computer game The Dark Eye, in Ted Mills’ previous post here.

Burroughs’ reading (which you can also hear on YouTube) will be added to our collection, 1,000 Free Audio Books: Download Great Books for Free.

Download the Complete Works of Edgar Allan Poe on His Birthday