Thanks to the tireless efforts of archaeologists, we have a pretty clear idea of what much of the ancient world looked like, at least as far as the clothes people wore and the structures in and around which they spent their days. But we seldom imagine these lives among the ruins-before-they-became-ruins in color, despite having read in the history books that some ancient builders and artists created a colorful world indeed, especially when a special architectural occasion like an Egyptian temple called for it.

“As depicted in popular culture, ancient Egypt is awash with the color beige,” writes the New York Times‘ Joshua Barone. “A trip to the Metropolitan Museum of Art would seem to reflect that notion: The Temple of Dendur, with its weatherworn sandstone, could fit in naturally with the earth tones of Aida or The Mummy.

But Egyptologists know that this temple, like many others of the ancient world, was painted with vivid colors and patterns. In ‘Color the Temple,’ a marriage of research and projection-mapping technology, visitors to the Met can now glimpse what the Temple of Dendur may have looked like in its original, polychromatic form more than 2,000 years ago.” 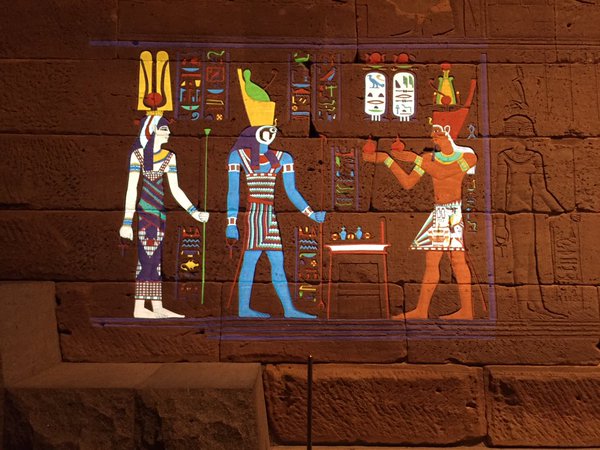 While the ravages of time haven’t destroyed the various scenes carved into the temple’s walls, they’ve long made it next to impossible for scholars to get an idea of what colors their creators painted them. Originally located on the banks of the Nile, the temple endured century after century of flooding (by the 1920s, almost nine months out of the year) which thoroughly washed away the surface of the images. But after some serious historical research, including the consultation of a 1906 survey by Egyptologist Aylward M. Blackman and the Napoleonic Description de l’Egypte, the Met’s team has come up with a pretty plausible idea of what the scene on the temple’s south wall, in which Emperor Caesar Augustus in Pharaoh garb presents wine to the deities Hathor and Horus, looked like in full color.

But it would hardly do to buy a few buckets from Sherwin-Williams and simply fill the wall in. Instead, the Met has used a much more advanced technology called digital projection mapping (also known, more Wired-ly, as “spatial augmented reality”) to restore the Temple of Dendur’s colors with light. You can get a sense of the result in the two videos at the top of the post, shot during the Color the Temple exhibition which ran through March 19.

For a closer look into the process, have a look at the video just above, created by Maria Paula Saba, who worked on the project. As you can see, the use of light rather than paint allows for the possibility of a variety of different color schemes, all of them quite possibly what the ancient Egyptians saw when they passed by, all of them fitting right in to the details and contours the ancient Egyptian artists put there — a thrill impossible to overstate for those of us who grew up with ancient-Egypt coloring books.