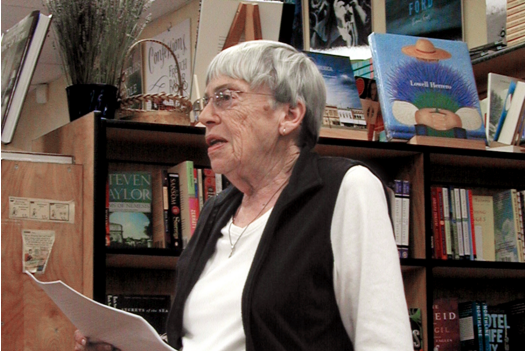 I’m sure I speak for many when I say that Ursula K. Le Guin’s novels and stories changed what I thought science fiction could be and do. Raised on H.G. Wells, Isaac Asimov, Robert Heinlein, and other mostly-white-male-centered classic sci-fi, I found Le Guin’s literary thought experiments startling and refreshing. Now it seems like almost a matter of course that science fiction and fantasy narratives come from a diversity of peoples and perspectives. But Le Guin remains the first to wake me from a dogmatic slumber about the potential of speculative fiction to imagine not only future technologies, but also expansive future identities.

Novels like The Left Hand of Darkness, The Dispossessed, and The Lathe of Heaven reflect Le Guin’s very broad range of interests in politics and the humanities and social sciences. She began her career as an academic studying Renaissance French and Italian literature, and her fiction synthesizes years of careful reading in anthropology, psychology, sociology, history, and Eastern and Western philosophy. Likewise, though she has been much influenced by traditional hard science fiction, Le Guin’s literary loves are wide and deep. All that’s to say she’s as admirable and interesting a reader as she is a writer. When she praises a book, I pay attention. Thanks to her genial, loquacious online presence for many years, her fans have had ample opportunity to find out what she’s reading and why.

Le Guin recently made a few lists of books she likes, and made sure to preface each one with a disclaimer: “This list is not ‘my favorite books.’ It’s just a list of books I’ve read or re-read, recently, that I liked and wanted to tell people about.” She leaps from genre to genre, writing mini-reviews of each book and linking each one to Powell’s, the independent bookstore in her beloved city of Portland, Oregon. Below, we’ve excerpted some of Le Guin’s “Books I’ve Liked” from each list, along with her commentary. Click on each date heading to see her complete lists of recommendations.

Seeing, by José Saramago. A sequel to his amazing novel Blindness. Saramago is not easy to read. He punctuates mostly with commas, doesn’t pararaph often, doesn’t set off conversation in quotes —; mannerisms I wouldn’t endure in a lesser writer; but Saramago is worth it. More than worth it. Transcendently worth it. Blindness scared me to death when I started it, but it rises wonderfully out of darkness into the light. Seeing goes the other way and is a very frightening book.

Changing Ones, by Will Roscoe. An examination of how gender has been constructed in Native American societies. Responsibly researched, very well written, generous in spirit, never oversimplifying a complex subject, this is a wonderfully enlightening book.

Age of Bronze: The Story of the Trojan War. I: A Thousand Ships, and II: Sacrifice by Eric Shanower. A graphic novel —; the first two volumes of a projected series. The drawing is excellent, the language lively, and the research awesome. Shanower goes back to the very origins of the war to follow the early careers of the various heroes —; Agamemnon and Menelaus, Achilles, Odysseus, Hector, Paris, Aeneas, and their families, parents, wives, lovers, children… Thus, by the end of Book Two, the actual siege of Troy, which the Iliad tells one part of, is yet to begin. I see a looming problem: the battles (of which there have been a good many already) are visually all alike, and there’s endlessly more to come —; battle scenes in Homer are brutally monotonous and interminable (as war is). But these two volumes are visually and narratively varied, and give a fascinating backgrounding and interpretation to the great stories.

The Yiddish Policemen’s Union, by Michael Chabon. Of course if you haven’t read Kavalier and Clay yet, go read it at once, what on earth have you been waiting for? Then read this. It is even a little crazier, maybe. Crazy like a genius.

Suffer the Little Children, by Donna Leon. The 16th of Leon’s Venetian mystery novels is one of the finest. I reviewed this book for the Manchester Guardian

Some young adult books I like — I had to read a lot of them this spring, and these stood out:

The Higher Power of Lucky by Susan Patron. This one has already won the Newbery Award and gone to Kiddilit Booksellers Heaven forever, so it doesn’t need my endorsement… but it’s a lovely, funny, sweet book, set in a truly godforsaken desert town in California.

Weedflower by Cynthia Kadohata. A novel that goes with its young heroine to one of the prison camps where our government sent all our citizens of Japanese ancestry in 1942 after Pearl Harbor. It’s a beautiful book, understated and strong and tender. If you read it you won’t forget it.

Charles Mann, 1491. A brilliant survey of what we know about the human populations of the Americas before the arrival of the Europeans, and a brief, often scathing history of how we’ve handled our knowledge. The author is not an archeologist or anthropologist, but he has done his homework, and is a fine reporter and summarizer, writing with clarity and flair, easy to read but never talking down. Discussing intensely controversial subjects such as dates of settlement and population sizes, he lets you know where he stands, but presents both sides fairly. A fascinating, mind-expanding book.

Michael Pollan, The Omnivore’s Dilemma. I have never eaten an Idaho potato since I read Pollan’s article about what potato fields are “treated” with, in his earlier book The Botany of Desire. This one is scary in a different way. It probably won’t stop you from eating anything, indeed it is a real celebration of (real) food; but the first section is as fine a description of the blind, incalculable power of Growth Capitalism as I ever read. (Did you know that cattle can’t digest corn, and have to be chemically poisoned in order to produce “cornfed beef”? So, there being lots and lots of grass, why feed them corn? Read the book!) There are some depressing bits in the section on “organic” food, too, but the last section, where he hunts and gathers his dinner, is funny and often touching.

Barbara Ehrenreich, Nickel and Dimed. Ehrenreich tries to get by on minimum wage, in three different towns, working as a waitress, a house cleaner, in a Wal-Mart… Yes, it came out eight years ago, and yes, it’s just as true now, if not truer. (I just read in my hometown paper that 47% of working people in Portland have to rely on food stamps. Not “welfare queens” — people with jobs, working people.) She writes her story with tremendous verve and exactness. It reads like a novel, and leaves you all shook up.

[Le Guin devoted this list to “Some Graphic Novels,” and wrote about her difficulty finding good “grown-up stuff.” Though most of it was not to her taste (“gross-out violence, or horror, or twee, or sexist, or otherwise not down my alley”), she kept “hoping, because the form seems to me such a hugely promising and adventurous one.” Below are two graphic novels she did like. Another, Age of Bronze, she mentioned above in her 2006 list.]

Marjane Satrapi’s Persepolis I and II, and her other books. (The movie of Persepolis was charming but it really didn’t add much to the book.) I admire her drawing, which is deceptively simple but very subtly designed, using the pure contrast-power of black-and-white. The drawings and the text combine so seamlessly that I’m not aware of looking back and forth between them, I’m just taking it all in at once — Which I think is pretty much my ideal for a graphic narrative?

Joann Sfar’s The Rabbi’s Cat I and II. Three connected stories in each volume. The first two stories in the first volume are pure delight. They are funny and wise and show you a world you almost certainly never knew existed. The rabbi is a dear, the rabbi’s daughter is a dear, and the rabbi’s cat is all cat, all through, all the way down. (I wondered why Sfar drew him so strangely, until I looked at the photograph of Sfar’s cat on the cover.) The second volume isn’t quite as great, but the first story in it is awfully funny and well drawn, with the most irresistible lion, and it’s all enjoyable. Sfar’s imagination and color are wonderful. His publisher should be pilloried in Times Square for printing the art in Vol II so small that you literally need a magnifying glass to read some of the continuity. — I gather that Sfar and Satrapi are friends. Are we on the way to having a great school of graphic novels by Foreigners Living in Paris?