In 1900, Thomas Edison traveled to Paris to document the many wonders of the Exposition Universelle, and the city itself. Among the sights captured with his kinetoscope cameras were the Expo’s moving sidewalks, the Champs-Élysées, and the previous Exposition Universelle’s crown jewel, the Eiffel Tower, now eleven years old.

It wasn’t all so high-minded. Edison and his kinetoscope also caught a performance by former Moulin Rouge star, Joseph Pujol, aka Le Pétomane, above. This elegantly attired gentlemen achieved fame and fortune with a series of impressions, carried out by a rather eccentric orifice. He was not so much artiste as fartiste, a title he wore with pride.

Pujol claimed to have discovered his unusual talent as a child, and soon set about achieving different effects by using his abdominal muscles to expel not gas, but odorless air. By varying the pressure, he was able to play simple tunes. By the time he turned 30, his act had expanded to include impersonations of celebrities, musical instruments, birds, a thunderstorm and such stock characters as a nervous bride. His grand finale included such feats as blowing out candles, smoking cigarettes and playing an ocarina (below), all with the aid of a rubber hose inserted into his anus via a modest trouser slit.

What a tragedy that Edison’s short film is silent! No live piano accompaniment could do justice to this magical artistic fruit, and if there were other recordings of Pujol, they’ve been lost to history.

He lives on in the imaginations of artists who followed him.

Actor Ugo Tognazzi, below, assumed the title role in a 1983 Italian language feature.

Sadly, Pujol was left on the cutting room floor of director Baz Luhrmann’s Moulin Rouge, but all is not lost. Reportedly, Johnny Depp has indicated interest in bringing this historic figure back to life. (Gentlemen, start your screenplays…) 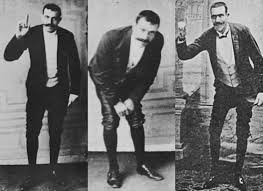 Then there is the half hour biopic, below, directed by Monty Python alum Ian McNaughton and starring Leonard Rossiter as Pujol. Prepare to hear the opening session of the Congress of Vienna, a toad, and a four-part harmony.