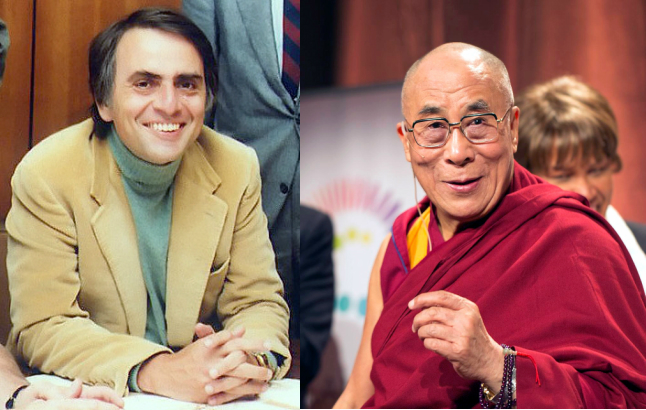 In a 1997 essay in Natural History, Stephen Jay Gould (in)famously called the realms of religion and science “Nonoverlapping Magisteria”—a phrase that acknowledges both endeavors as equally powerful and important to human life. His theory entails “respectful discourse” and “constant input from both magisteria toward the common goal of wisdom.” Many partisans then and now have found the idea hopelessly naïve or misguided, and Gould did describe a rather specifically enlightened example of the position: a person seeking “a more spiritual view of nature” who also acknowledges “the factuality of evolution and other phenomena.” An educated skeptic, with mystical and poetic sensibilities.

The majority of religious believers do not fit this description. But some do. So too did Carl Sagan, to whom Gould dedicated his essay in a postscript. Sagan “shared my concern for fruitful cooperation between the different but vital realms of science and religion.” However, like Gould, Sagan gave the scientific method the override, and strenuously advocated that we all do likewise or become easily duped by charlatans or by our own flawed perceptions. Sagan acknowledged the cosmos as a great mystery—one he wanted to understand, not worship. And he spoke of the natural world with the kind of lyrical awe and reverence often reserved for the supernatural.

Sagan, in fact, organized and attended the meeting at the Vatican that occasioned Gould’s essay. He also found himself, in the early 1990s, connecting deeply with another world religious leader, the Dalai Lama. The exiled Tibetan Buddhist and the astrophysicist first met in Ithaca in 1991, sitting down for the discussion recorded in the video above. Unfortunately, the production quality renders this recording nearly unwatchable. Their conversion is audible but they both disappear into a pixelated blue blur. That said, the conversation merits preservation in any form (you can also read a transcript of their talk here).

Sagan puts to the Dalai Lama the question he asked every major religious leader he met with: “What happens if the doctrine of a religion—Buddhism let’s say—is contradicted by some finding, some discovery—in science, let’s say—what does a believer in Buddhism do in that case?” The answer below came very much as a surprise to Sagan, who later said the Dalai Lama “replied as no traditionalist or fundamentalist religious leaders do.”

DL: ‘For Buddhists that is not a problem. The Buddha himself made clear that the important thing is your own investigation. You should know the reality, no matter what the scripture says. In case you find a contradiction—opposite of the scriptures’ explanation—you should rely on that finding, rather than scripture.’

DL: ‘Yes, that’s right. So I think that the basic Buddhist concept is that at the beginning it is worthwhile or better to remain skeptical. Then carry out experiments through external means as well as internal means. If through investigation things become clear and convincing, then it is time to accept or believe. If, through science, there is proof that after death there is no continuity of human mind, of life, then—theoretically speaking—Buddhists will have to accept that.’

Of course, many Buddhists may not find this surprising at all. The principles the Dalai Lama outlines are clearly outlined in the Kalama Sutta, a supposed discourse of the Buddha in which he issues a “Charter of Free Inquiry” as one interpretation has it. It is indeed a unique feature in world religions, though the Dalai Lama did add—“mischievously,” said Sagan—that “it will be hard to disprove reincarnation!” In such areas where a proposition cannot be falsified, religion and science may agree to disagree—civilly or otherwise—or change the subject. In the course of their acquaintance, Sagan and the Dalai Lama disagreed on very little.

When it comes to Buddhism, the Dalai Lama points out that the conversation between science and religion is hardly one-sided: “Some scientists also show a genuine and keen interest in Buddhist explanations…. One thing is quite clear: As far as mental sciences are concerned, Buddhism is very highly advanced.” The interest researchers and neuroscientists have shown in Buddhist psychology and meditative therapy has only increased in the past twenty-five years, such that entire departments devoted to mindfulness meditation have sprung up at venerable universities and respected medical schools.

And since Sagan’s death in 1996, the Dalai Lama has continued to reflect on the convergences between scientific discovery and Buddhism in his books and talks. And Sagan’s widow Ann Druyan has carried on Sagan’s legacy, sharing the awe and wonder of science with a popular audience through film, print, and television. In 2007, Druyan appeared at Cornell to talk about the affinities between Sagan and the Dalai Lama during their first and subsequent meetings. You can see her talk in full here.