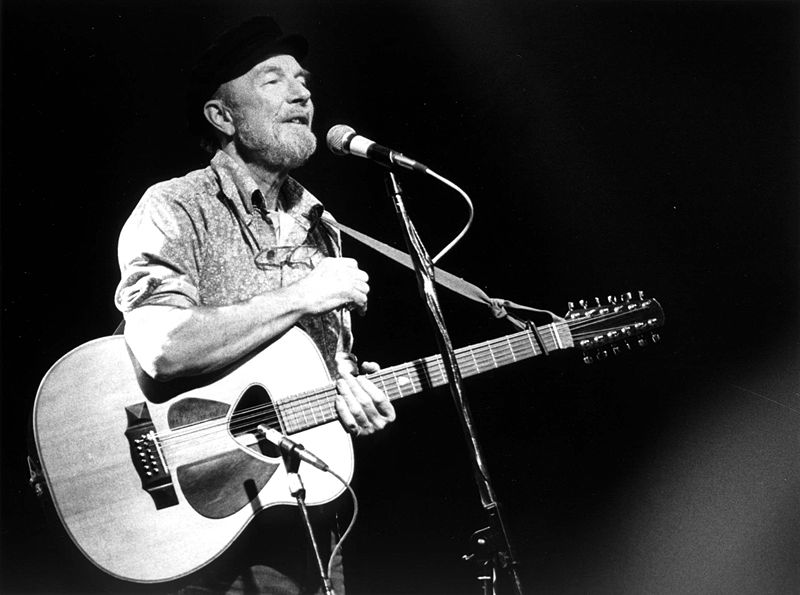 Along with earnest political populism and a renewed interest in regional cultures, the folk revival of the fifties and sixties brought with it a liberating sense of possibility, as young writers, singers, and artists discovered that, truly, anyone can play guitar. Or rather, anyone can pick up most any stringed instrument and, with a few fundamentals, enjoy the experience of writing and playing music in a way that seemed unavailable or forbidding before people like Pete Seeger and Bob Dylan appeared on the scene.

Both popularizers of Woody Guthrie’s Depression-era ballads and of obscure blues and folk artists, Dylan and Seeger took very different approaches to their art. The former cultivated a mystique that seems impossible to penetrate, and that has made him seem—as Todd Haynes’ masterful film I’m Not There dramatizes—like a series of different people. But Seeger has always been Seeger, from his gentle, aw-shucks demeanor and warm accessibility to his staunchly progressive messages that speak to children and regular folks as well as to those with more sophisticated tastes and talents.

So it seems only natural that Seeger released an album of guitar instruction, The Folksinger’s Guitar Guide, addressed to both beginners and more advanced players. “I guess any musical instrument can be as hard to play as you want to make it,” Seeger begins, in one of his characteristically fluid transitions from song to speech: “If you wanted to be a person like Andres Segovia or Merle Travis, why it would take a lifetime of training. But for most of us, playing a guitar can be about as simple as walking.” After that reassuring comparison, he does remind us, however, that “it took us all a couple years to learn how to walk.”

Seeger begins with first steps—tuning the instrument—and patiently leads his listeners through some basic chord shapes, strumming techniques, and then more advanced picking methods, alternate tunings, and styles like Flamenco, “Rhumba Rhythm,” and “Mexican Blues.” You can listen to the album track-by-track on Spotify, further up. (You can also find it kicking around on YouTube.) Like the great educator he was, Seeger also includes some helpful visual aids in the album’s liner notes (see them here), including drawings of chord fingerings, musical notation, and guitar tablature for those who don’t read music. In addition to his readable instructions, he also includes the lyrics to all of the folk songs referenced throughout.

“Practice each small section over and over,” he writes in his introduction, “until it comes easy. Actually, if you enjoy playing the guitar, you shouldn’t think of it as practicing, in the formal sense. Rather simply play for your own enjoyment and that of your friends.” He also recommends that his listeners “beg, borrow, or steal” the records he references in the booklet, for “they will be of help to you in giving you an idea of the scope and possibilities of the instrument.” I can’t think of a music teacher more inviting than Seeger, nor a method more relaxed.

A second volume featuring Jerry Silverman appeared soon after, and upped the ante a good bit. “Musical standards are on the rise,” Silverman says in his introduction, “the virtuoso folk guitarist is on the scene.” He promises to help the “strumming population… keep pace with the upward spiral.” You can be the judge of how successful he is in that effort. Unfortunately, we don’t have Silverman’s supplementary materials available, but you can listen to the complete Folksinger’s Guitar Guide: Volume 2 above.

Learn to Play Guitar for Free: Intro Courses Take You From The Very Basics to Playing Songs In No Time