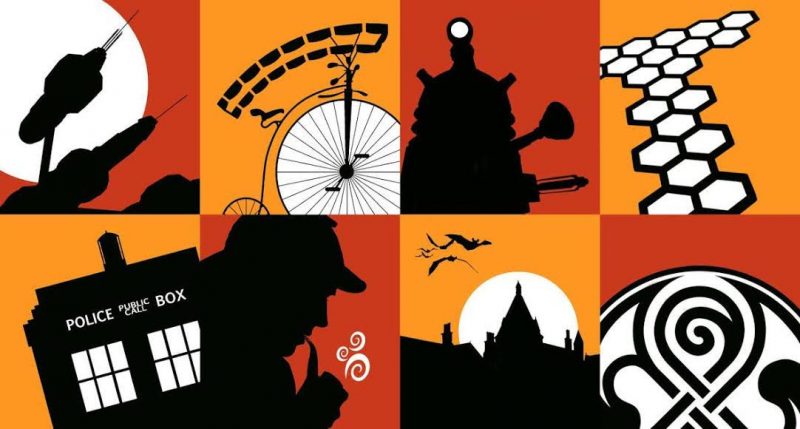 “Yes, this should provide adequate sustenance for the Doctor Who marathon,” once said The Simpsons‘ Comic Book Guy while pushing a wheelbarrow full of fast-food tacos down the street. As the embodiment of fandom for all things fantasy and sci-fi, he would certainly know that Doctor Who, no longer an obscure BBC television show but an ever-expanding fictional universe with a global fan base, constitutes the ideal material for binge-watching, which he could now do at his convenience on a service like Britbox. But it isn’t just watching: now, on Spotify (whose free software you can download here if you don’t have it already), you can binge-listen to thirty straight hours of Doctor Who audio dramas as well.

“An icon of modern British culture and the longest-running science-fiction TV show in history, Doctor Who has never been more popular than it is today,” wrote Christopher Bahn in the AV Club’s 2010 primer on the series, which had relaunched five years earlier after initially running from 1963 to 1989. “No matter who’s playing the lead, the basic premise has been essentially the same since the show’s debut: A mysterious, eccentric alien known only as The Doctor (not ‘Doctor Who,’ in spite of the title) travels through time and space having adventures and fighting evil. He’s usually accompanied by one or two humans picked up along the way. They journey with him in a time machine called a TARDIS, which looks like a blue phone booth.”

This format “allowed the show to literally go anywhere in the universe and sometimes outside it, with virtually limitless storytelling possibilities.” At its best, “Doctor Who relied on solid, imaginative scripts to create smart science-fiction thrillers with a humanistic, anti-authoritarian heart. Consistently popular through the 1960s and 1970s, the show began to falter in the following decade as tight budgets and questionable artistic choices took their toll.” After its cancellation in 1989, Doctor Who “lived on through the ’90s, as science-fiction shows often do, in the wilderness genres of semi-official novels and radio plays.”

The best known of these Doctor Who radio plays, which you can hear on this playlist, come produced by a company called Big Finish. Having acquired a license from the BBC in 1999 (and recently renewed it into 2025), they’ve put out a range of audio dramas, both one-offs and series of various lengths, using not just the characters but many of the actual actors from the television show, including six of those who have taken on the iconic Doctor role onscreen. Owing to the fact that Doctor Who officially has no canon and thus no need for continuity, rigorous or otherwise, they can get even more imaginative than their source material, going so far as to explore counterfactual storylines such as one where the Doctor never leaves his home planet in the first place.

Below you’ll find a complete list, assembled by a fan on Reddit, of the series and episodes of Big Finish’s Doctor Who audio dramas now available on Spotify and are now housed to our collection of Free Audio Books. The material comes to thirty hours in total, but the question of when to listen to it falls second to a more important consideration: what sort of sustenance will best ensure that you can keep up with all of the Doctor’s audio adventures?

Destiny of the Doctor: