Upon arriving in Venice in the late 1930s, columnist and Algonquin Round Table regular Robert Benchley immediately sent a telegram back home to America: “Streets full of water. Please advise.” The line has taken its place in the canon of American humor, but in more recent times the image of water-filled streets — unintentionally water-filled streets, that is — has arisen most often in the conversation about climate change. Some of the potential disaster scenarios envision every major coastal city on Earth eventually turning into a kind of Venice, albeit a much less pleasant version thereof. 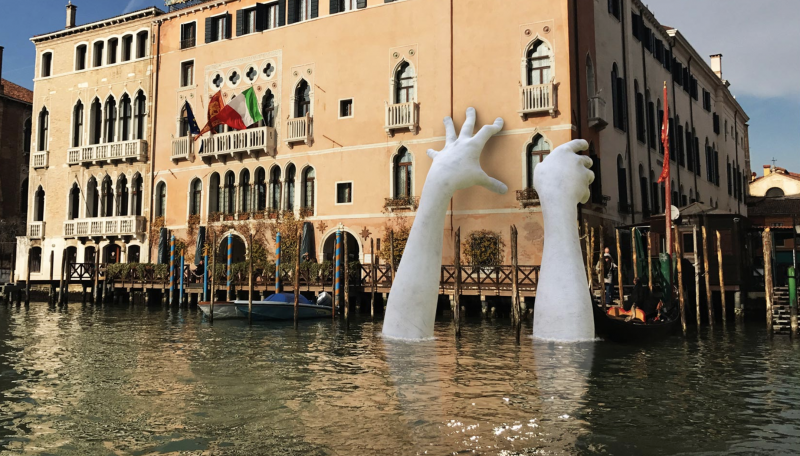 And so what better place than the one that hosts perhaps the world’s best known art exhibition, the Venice Biennale, to express climate-change anxiety in the form of public sculpture? “Venice is known for its gondolas, canals, and historic bridges,” writes Condé Nast Traveler’s Sebastian Modak, “but visitors will now also be greeted by another, albeit temporary, reminder of the city’s intimate relationship with water: a giant pair of hands reaching out of the Grand Canal and appearing to support the walls of the historic Ca’ Sagredo Hotel.” The piece is called Support, and it’s created by Barcelona-based Italian sculptor Lorenzo Quinn.

“I have three children, and I’m thinking about their generation and what world we’re going to pass on to them,” Quinn told Mashable’s Maria Gallucci. “I’m worried, I’m very worried.” The hands of his 11-year-old son actually provided the model for the polyurethane-and-resin hands of Support, weighing 5,000 pounds each, that stand on 30-foot pillars at the bottom of the Grand Canal. Modak quotes one of Quinn’s Instagram posts which describes the work as speaking to the people “in a clear, simple and direct way through the innocent hands of a child and it evokes a powerful message, which is that united we can make a stand to curb the climate change that affects us all.”

Those arguing in favor of more aggressive political measures to counteract the effects of climate change have gone to great lengths to point out what forms those effects have so far taken. But the fact that, apart from a stretch of hot summers, few of those effects have yet manifested undeniably in most people’s lives has certainly made their job harder. But nobody who visits Venice during the Biennale could fail to pause before Support, a work whose visual drama demands a reaction that temperature charts or data-filled studies can’t hope to provoke by themselves. And even apart from the issue at hand, as it were, Quinn’s sculpture reminds us that art, even in as deeply historical a setting as Venice, can also keep us thinking about the future.

How Climate Change Is Threatening Your Daily Cup of Coffee