The CIA Assesses the Power of French Post-Modern Philosophers: Read a Newly Declassified CIA Report from 1985 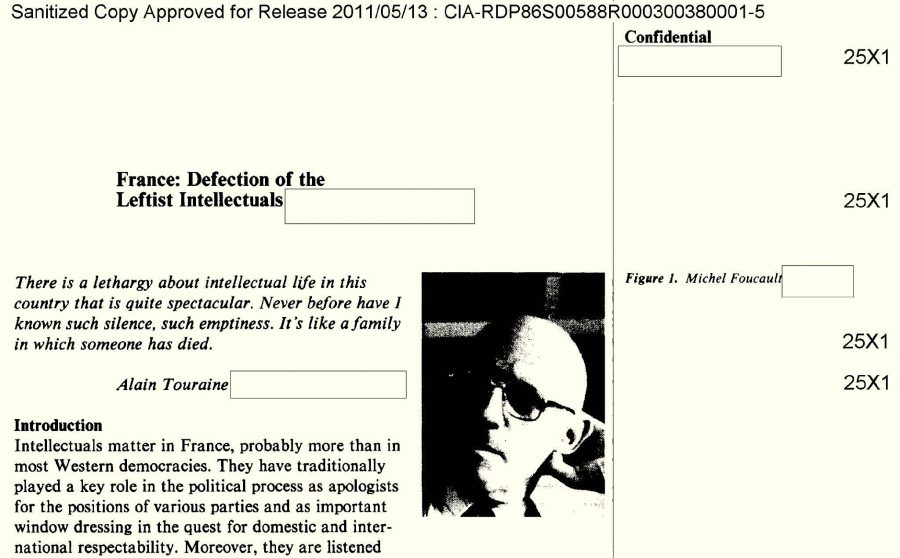 We might assume that philosophy is an ivory tower discipline that has little effect on the unlovely operations of government, driven as they are by the concerns of middle class wallets, upper class stock portfolios, and the ever-present problem of poverty. But we would be wrong. In times when presidents, cabinet members, or senators have been thoughtful and well-read, the ideas of thinkers like Francis Fukuyama, Leo Strauss, Jurgen Habermas, and John Rawls—a favorite of the previous president—have exercised considerable sway. Few philosophers have been as historically influential as the German thinker Carl Schmitt, though in a thoroughly destructive way. Then there’s John Locke, Jean-Jacques Rousseau, Thomas Hobbes, Aristotle… even Socrates, who made himself a thorn in the side of the powerful.

But when it comes to the mostly French school of thinkers we associate with postmodernism—Michel Foucault, Roland Barthes, the Jacques Lacan and Derrida, and many others—such influence is far less direct. The work of these writers has been often dismissed as frivolous and inconsequential, speaking a language no one understands to out of touch coastal elites on the left edge of the spectrum. Perhaps this is so in the United States, where power is often theorized but rarely radically critiqued in mainstream publications. But it has not been so in France. At least not according to the CIA, who closely monitored the effects of French philosophy on the country’s domestic and foreign policy during their long-running culture war against Communism and “anti-Americanism,” and who, in 1985, compiled a research paper to document their investigations. (See a sample page above.)

Recently made available to the public in a “sanitized copy” through a Freedom of Information Act request, the document, titled “France: Defection of the Leftist Intellectuals,” shows itself surprisingly approving of the political direction post-structuralist thinkers had taken. ga**************@vi*******.edu&xsl=bio_long">Villanova University professor of philosophy and author of Radical History and the Politics of Art Gabriel Rockhill summarizes the tenor of the agency’s assessment in the L.A. Review of Books’ Philosophical Salon:

…the undercover cultural warriors applaud what they see as a double movement that has contributed to the intelligentsia shifting its critical focus away from the US and toward the USSR. On the left, there was a gradual intellectual disaffection with Stalinism and Marxism, a progressive withdrawal of radical intellectuals from public debate, and a theoretical move away from socialism and the socialist party. Further to the right, the ideological opportunists referred to as the New Philosophers and the New Right intellectuals launched a high-profile media smear campaign against Marxism.

The “spirit of anti-Marxism and anti-Sovietism,” write the agents in their report, “will make it difficult for anyone to mobilize significant intellectual opposition to US policies.” The influence of “New Left intellectuals” over French culture and government was such, they surmised, that “President [Francois] Mitterrand’s notable coolness toward Moscow derives, at least in part, from this pervasive attitude.”

These observations stand in contrast to the previous generation of “left-leaning intellectuals of the immediate postwar period,” writes Rockhill, who “had been openly critical of US imperialism” and actively worked against the machinations of American operatives. Jean-Paul Sartre even played a role in “blowing the cover of the CIA station officer in Paris and dozens of undercover operatives,” and as a result was “closely monitored by the Agency and considered a very serious problem.” By the mid-eighties, the Agency stated, triumphantly, “there are no more Sartres, no more Gides.” The “last clique of Communist savants,” they write, “came under fire from their former proteges, but none had any stomach for fighting a rearguard defense of Marxism.” As such, the late Cold War period saw a “broader retreat from ideology among intellectuals of all political colors.”

A certain weariness had taken hold, brought about by the indefensible totalitarian abuses of the “cult of Stalinism” and the seeming inescapability of the Washington Consensus and the multinational corporatism engendered by it. By the time of Communism’s collapse, U.S. philosophers waxed apocalyptic, even as they celebrated the triumph of what Francis Fukuyama called “liberal democracy” over socialism. Fukuyama’s book The End of History and the Last Man made its startling thesis plain in the title. There would be no more revolutions. Harvard thinker Samuel Huntington declared it the era of “endism,” amidst a rash of hyperbolic arguments about “the end of art,” the “end of nature,” and so on. And, in France, in the years just prior to the fall of the Berlin wall, the previously vigorous philosophical left, the CIA believed, had “succumbed to a kind of listlessness.”

While the agency credited the diffidence of post-structuralist philosophers with swaying popular opinion away from socialism and “hardening public attitudes toward Marxism and the Soviet Union,” it also wrote that “their influence appears to be waning, and they are unlikely to have much direct impact on political affairs any time soon.” Is this true? If we take seriously critics of so-called “Identity Politics,” the answer is a resounding No. As those who closely identify postmodern philosophy with several recent waves of leftist thought and activism might argue, the CIA was shortsighted in its conclusions. Perhaps, bound to a Manichean view fostered by decades of Cold War maneuvering, they could not conceive of a politics that opposed both American and Soviet empire at once.

And yet, the retreat from ideology was hardly a retreat from politics. We might say, over thirty years since this curious research essay circulated among intelligence gatherers, that concepts like Foucault’s biopower or Derrida’s skeptical interrogations of identity have more currency and relevance than ever, even if we don’t always understand, or read, their work. But while the agency may not have foreseen the pervasive impact of postmodern thought, they never dismissed it as obscurantist or inconsequential sophistry. Their newly-released report, writes Rockhill, “should be a cogent reminder that if some presume that intellectuals are powerless, and that our political orientations do not matter, the organization that has been one of the most potent power brokers in contemporary world politics does not agree.”