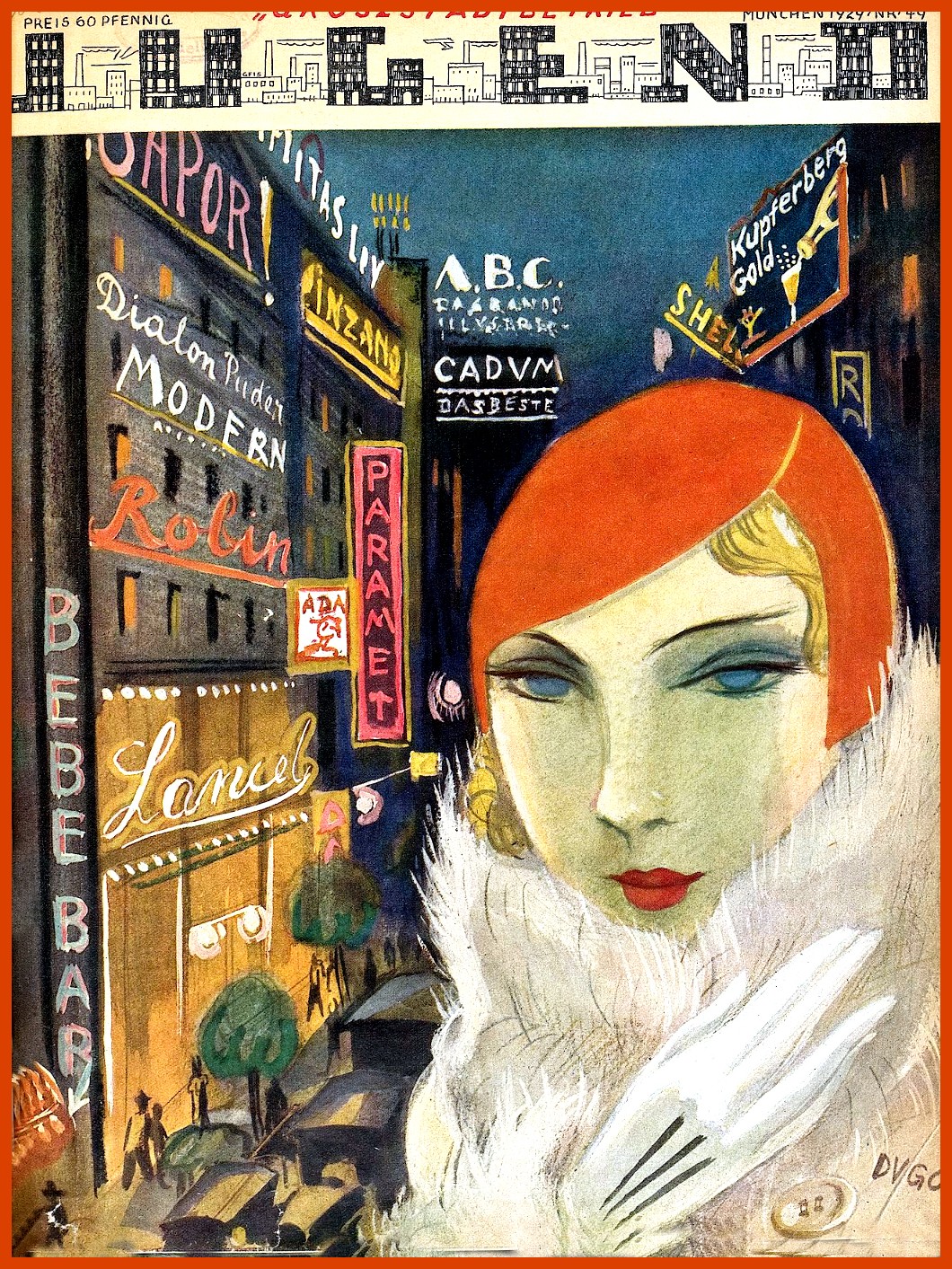 It’s an ungainly word for English speakers, which is maybe why we do not hear it often: Gleichschaltung. Yet the concept remains central for a clear view of what happened to Germany in the 1930s. In 1933, the nation completely transformed, seemingly overnight, through “a concerted policy of ‘coordination’ (Gleischaltung),” the U.S. Holocaust Museum writes. “Culture, the economy, education, and law all came under Nazi control.” Those artists and organizations that were not purged had their essential character changed to reflect an entirely different set of artistic and political values. One publication, especially, serves as an example of the Nazification of culture.

The arts journal Jugend (Youth), writes Messy ’N Chic, “had been turned largely into propaganda” between 1933 and 1940, its final year. But prior to the regime’s takeover, Jugend showcased the most avant-garde, “degenerate” artists of the era, and might have been “the ‘brainiest’ periodical of the day,” as one critic wrote in a 1904 issue of The Yale Literary Magazine. “There is no magazine published in England or in this country which is at all like it.”

You can take a look yourself—browse, search, and download hundreds of scanned issues of Jugend at the University of Heidelberg’s digital archive, thousands of pages in PDF form, spanning the magazine’s forty-four year history. You can also see images at Flickr. 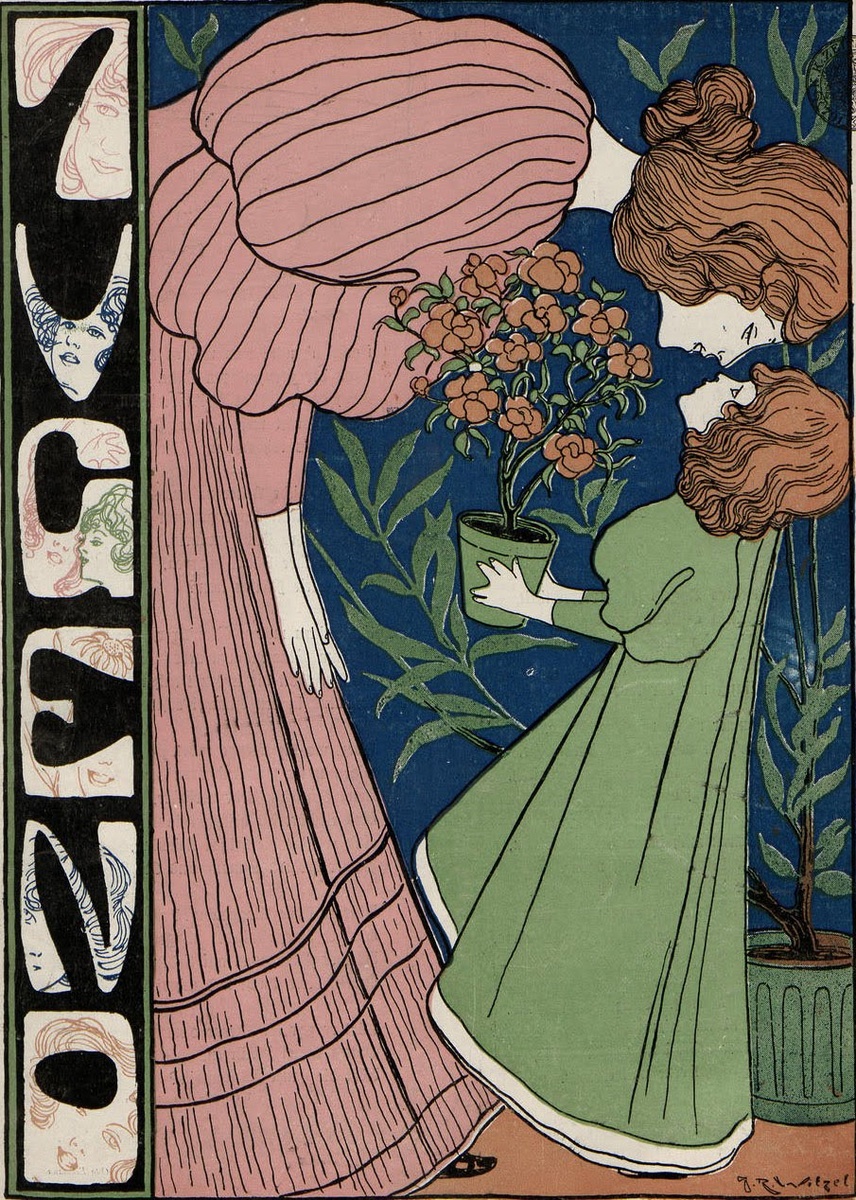 As in England, France, Austria, and the U.S., the Art Nouveau movement in Germany emerged from a whirlwind of post-Impressionist painting, Orientalist motifs, folk art, modernist art and advertising, book illustration, and graphic and industrial design. Appropriately, given its perch on the threshold of a new millennium, Art Nouveau looked both backward—to the medieval, gothic, and Romantic—and forward toward a more modernist, urbane, and urbanized sensibility. 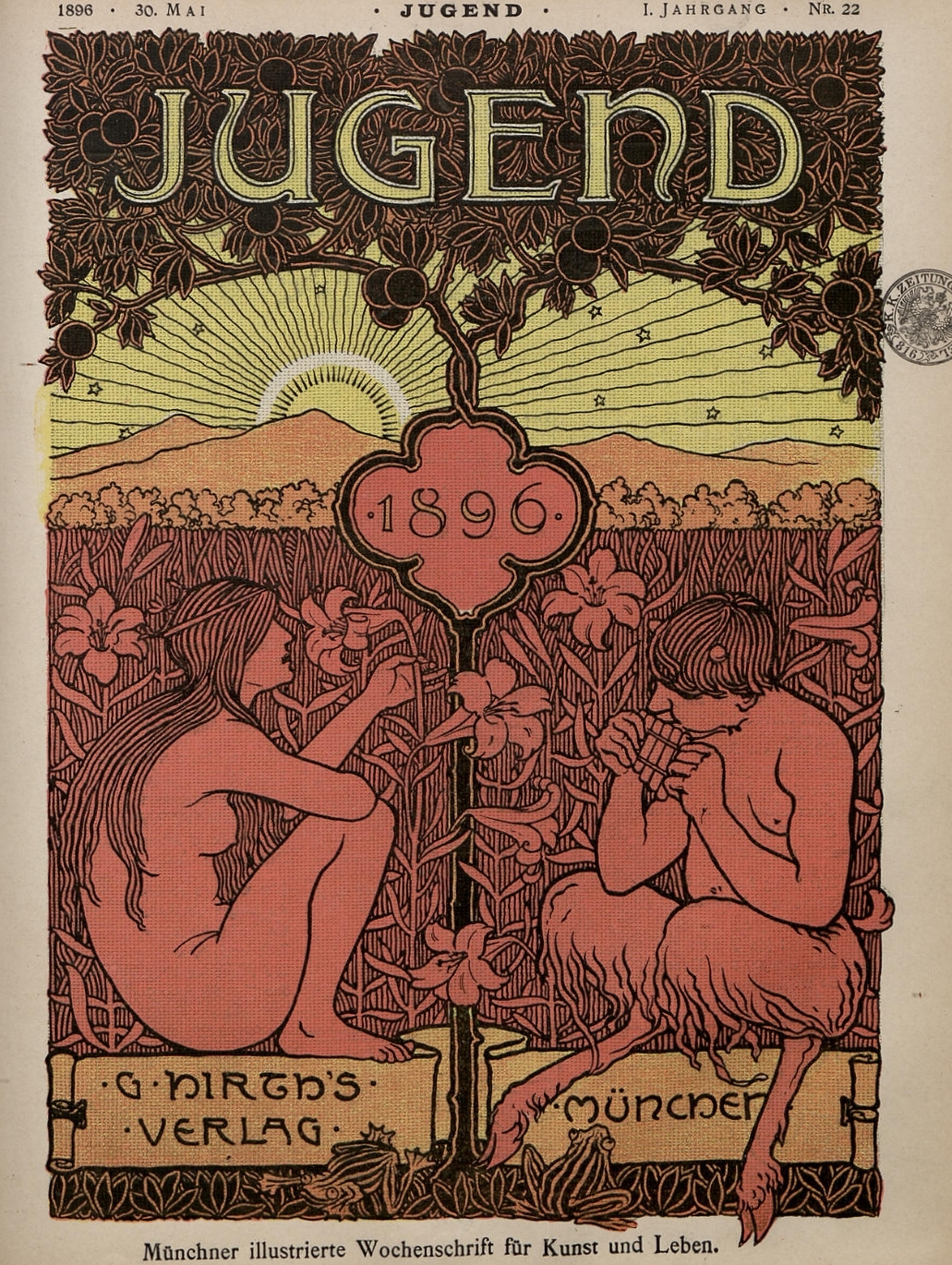 So influential was Jugend that Art Nouveau in Germany became known as Jugendstil. The Oxford Critical and Cultural History of Modernist Magazines writes, “Among Jugend‘s most important qualities—indeed, an essential aspect of Art Nouveau and its German equivalent Jugendstil—was its brilliant escapism.” Founded in 1896 by writer George Hirth, the magazine was “from the start a venue to promote the new cultural Renaissance without recourse to the established ‘vintage’ art.” (See its very first cover right above.) 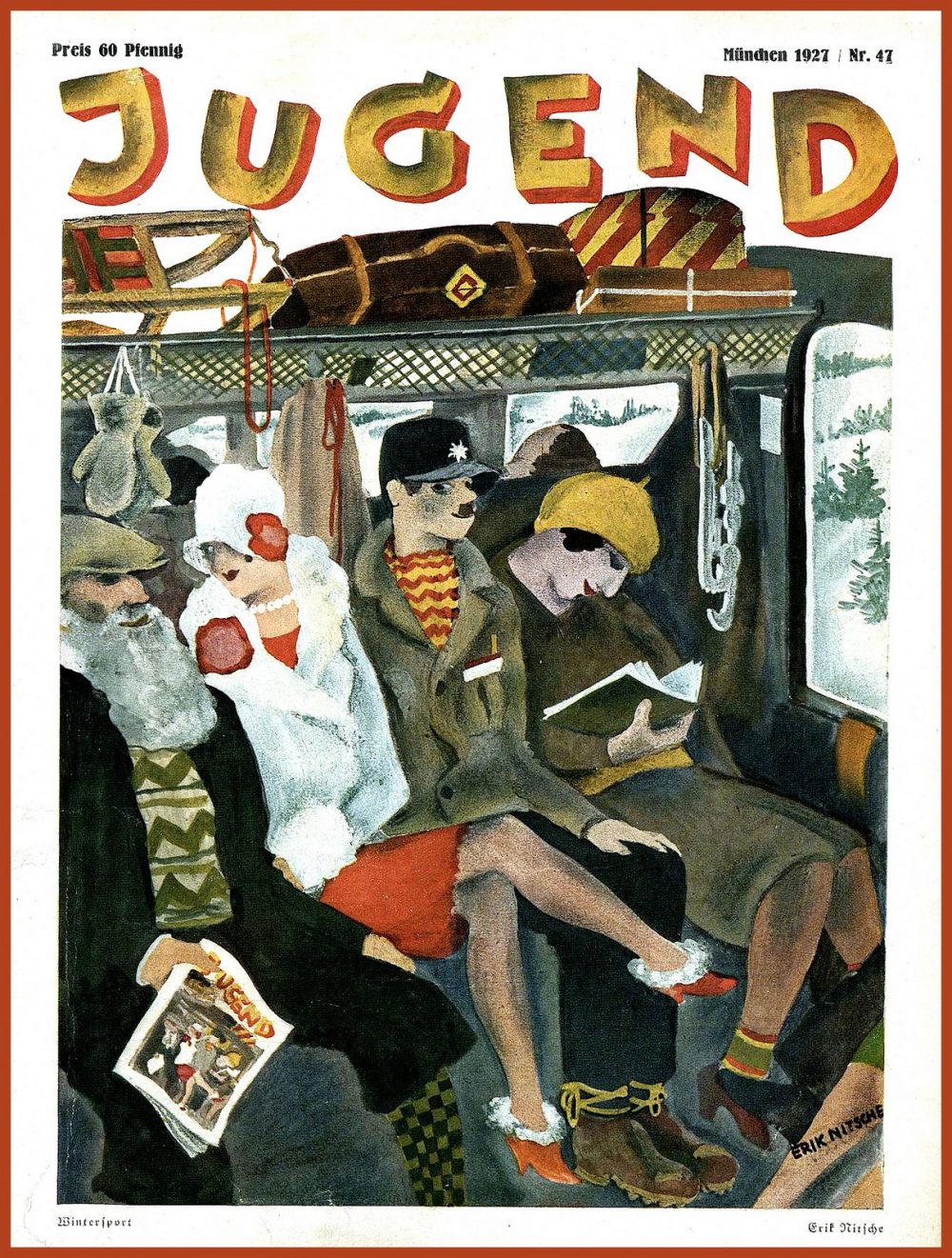 Jugenstil was primarily based in Munich, where most of its artists, designers, and writers lived and worked, until the turn of the century, when, notes the Art Encyclopedia, “the Munich group dispersed, heading for Berlin, Weimar and Darmstadt.” Art Nouveau in Germany developed in two phases, “a pre-1900 phase dominated by floral motifs, themselves rooted in English Art Nouveau and Japanese art,” and a “post-1900 phase, marked by a tendency towards abstract art.” 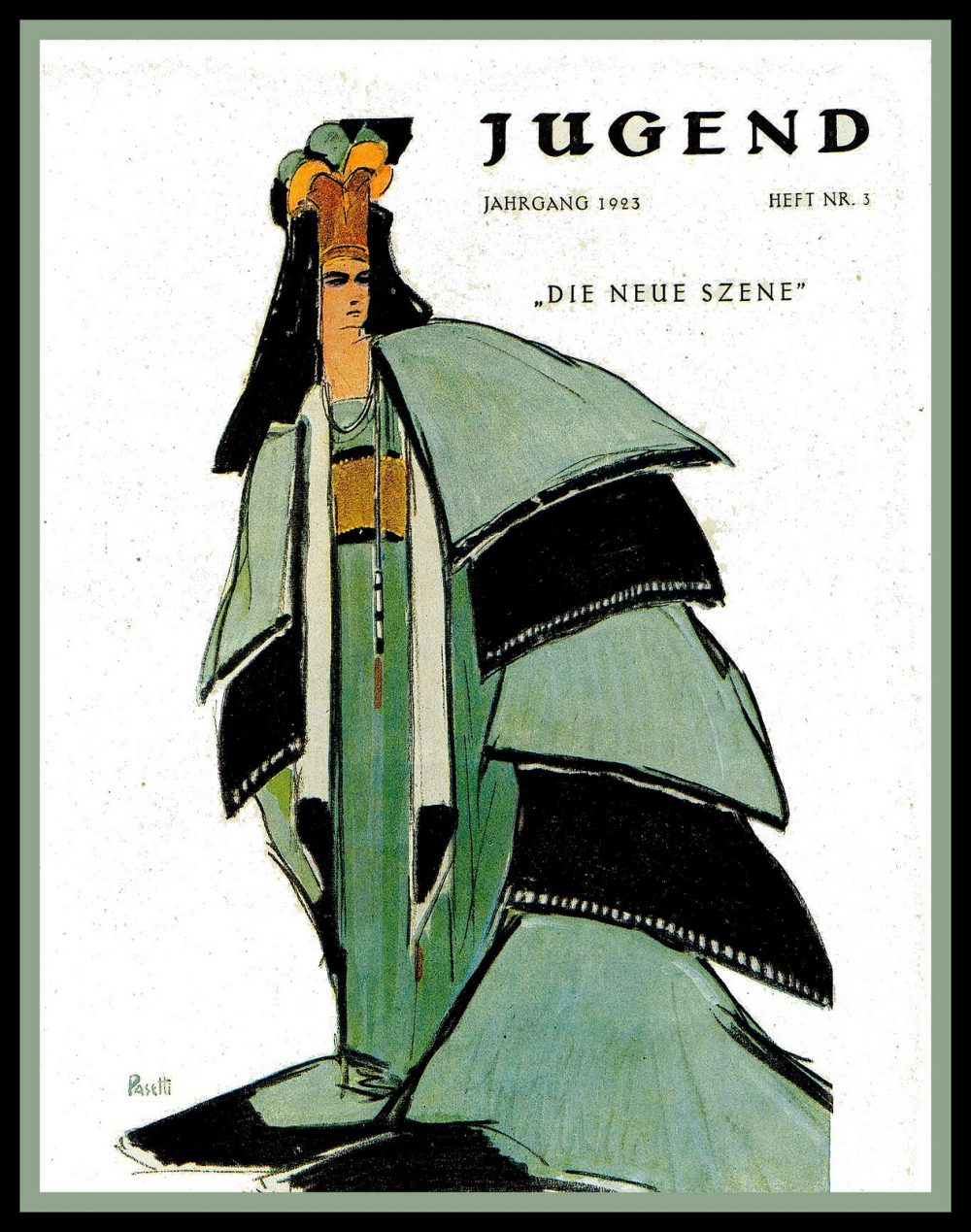 While we know the names of many Art Nouveau artists from elsewhere in Europe—Henri Toulouse-Lautrec in France, Aubrey Beardsley in England, Gustave Klimt in Austria, for example— Jugendstil in Germany produced few international stars. Many of the artists published in its pages were relatively unknown at first. But its shockingly brilliant covers and radical editorial tone put it at the forefront of German arts for decades. “Jugend‘s political and social platform,” wrote the The Yale Literary Magazine critic, “is one of opposition—opposition to everything.” 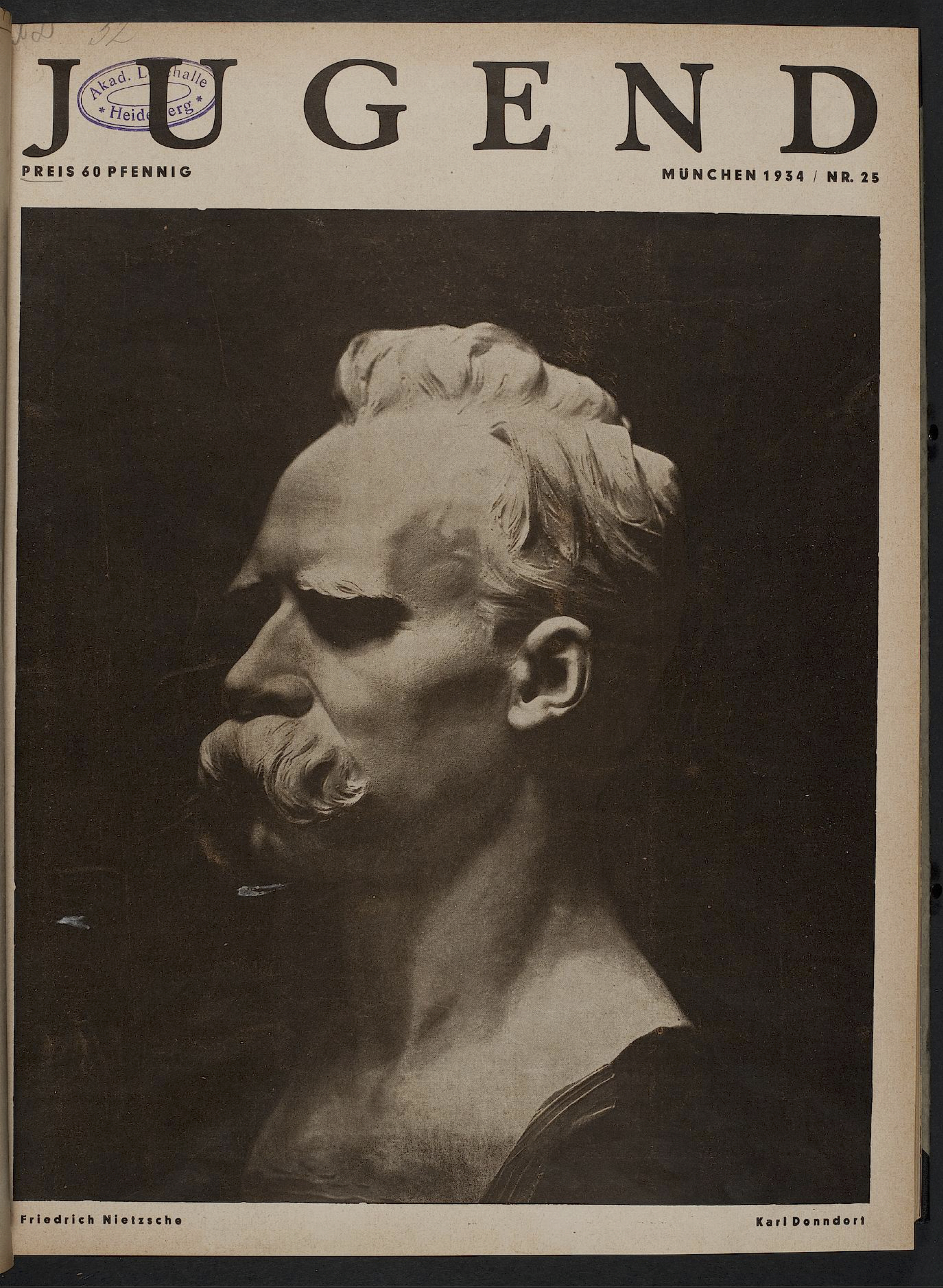 In 1933, however, the magazine was forced to comply with the kind of dour conservatism it had arisen explicitly to protest. Its wild covers and proudly original contents turned sombre and neoclassical, as in the bust of Nietzsche on the cover above from 1934. Many of its artists disappeared or went into exile. But as we observe this transformation happening abruptly in the University of Heidelberg archive, we still see a magazine whose editorial staff held fast to notions of artistic quality, as they were forced to turn away from everything that had made Jugend exciting, cutting-edge, and worthy of its title. 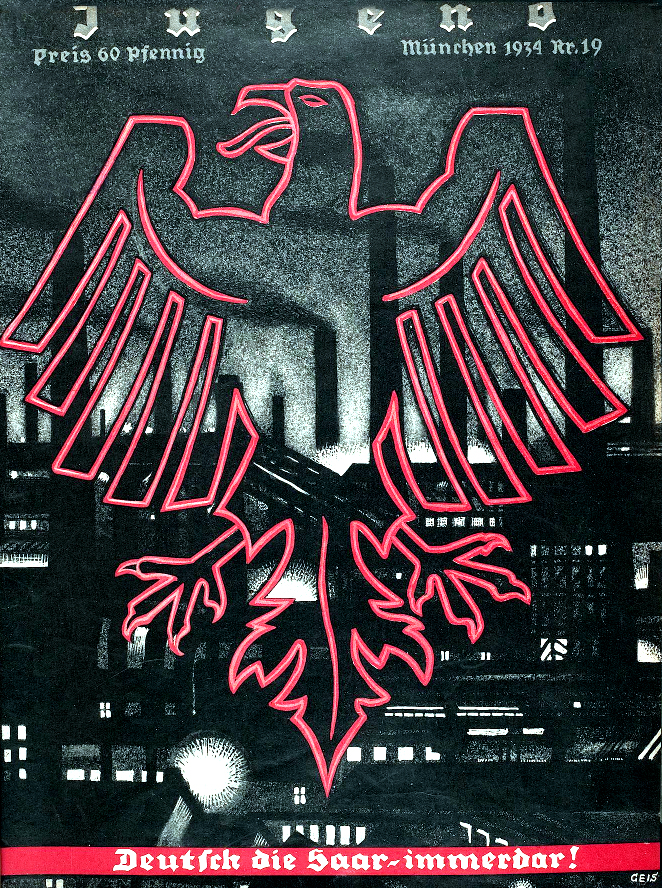