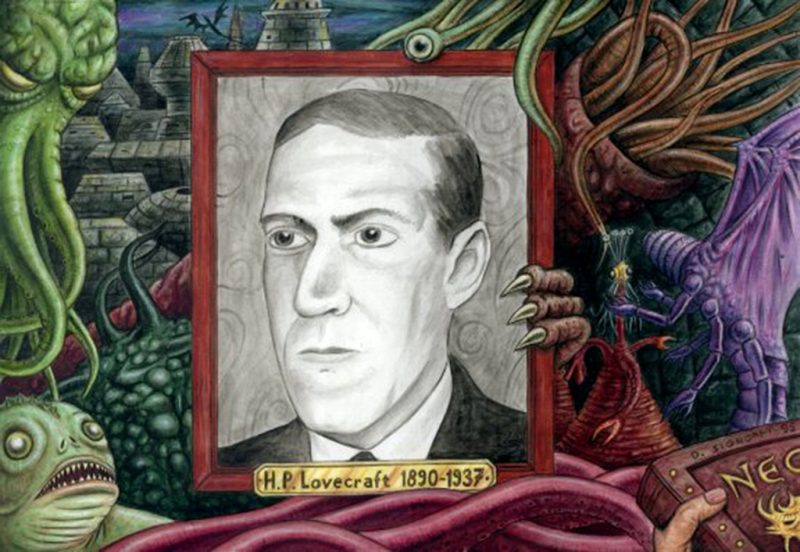 “The most merciful thing in the world, I think, is the inability of the human mind to correlate all its contents. We live on a placid island of ignorance in the midst of black seas of infinity, and it was not meant that we should voyage far.” So writes the narrator of “The Call of Cthulhu,” the best-known story by Howard Phillips Lovecraft, who, before he burnt out and died young, spent his whole literary career looking into that infinity and reporting on the psychological effects of what he sensed lurking there. What better writer to read on Halloween night, when — amid all the partying and the candy — we all permit ourselves a glimpse into the abyss?

Indeed, what better writer to hear on Halloween night? Once it gets dark, consider firing up this fourteen-hour Spotify playlist of H.P. Lovecraft audiobooks, featuring readings of not just “The Call of Cthulhu” but The Shadow over Innsmouth, “The Dunwich Horror,” “The Thing on the Doorstep,” and other stories besides. (If you don’t have Spotify’s free software, you can download it here.)

Though Lovecraft has a much wider readership now than he ever accrued in his lifetime, some of your guests might still never have heard his work and thus struggle to pin it down: is it horror? Is it suspense? Is it the macabre, the sort of thing perfected by Lovecraft’s predecessor in frightening American letters Edgar Allan Poe?

The word they need is “weird,” not in the modern sense of “somewhat unusual,” but in the early 20th-century sense — the sense of Weird Tales, the pulp magazine that published Lovecraft — of a heady blend of the supernatural, the mythical, the scientific, and the mundane. Joyce Carol Oates once wrote that Lovecraft’s stories, seldom sensational, “develop by way of incremental detail, beginning with quite plausible situations — an expedition to Antarctica, a trip to an ancient seaside town, an investigation of an abandoned eighteenth-century house in Providence, Rhode Island, that still stood in Lovecraft’s time. One is drawn into Lovecraft by the very air of plausibility and characteristic understatement of the prose, the question being When will weirdness strike?” An ideal question to ask while floating along the black sea of Halloween night.

This playlist of Lovecraft stories will be added to our collection, 1,000 Free Audio Books: Download Great Books for Free.