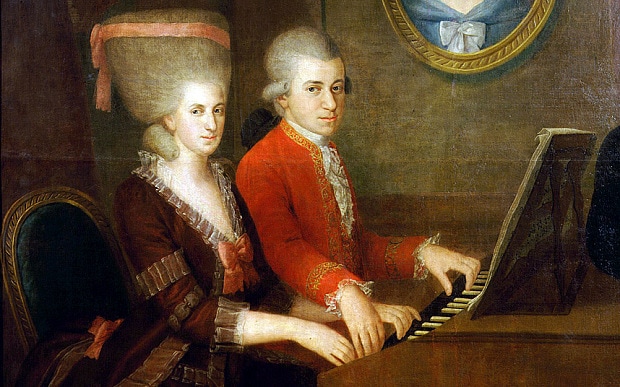 When people ask why we have specifically black histories, or queer histories, or women’s histories, it can be hard for many who do historical research to take the question seriously. But in fairness, such questions point to the very reason that alternative or “revisionist” histories exist. We cannot know what we are not told about history—at least not without doing the kind of digging professional scholars can do. Virginia Woolf’s tragic, but fictional, history of Shakespeare’s sister notwithstanding, the claims made by cultural critics about marginalization and oppression aren’t based on speculation, but on case after case of individuals who were ignored by, or shut out of, the wider culture, and subsequently disappeared from historical memory.

One such extraordinary case involves the real sister of another towering European figure whose life we know much more about than Shakespeare’s. Before Wolfgang Amadeus Mozart began writing his first compositions, his older sister Maria Anna Mozart, nicknamed Nannerl, had already proven herself a prodigy.

The two toured Europe together as children—she was with her brother during his 18-month stay in London. “There are contemporaneous reviews praising Nannerl,” writes Sylvia Milo, “and she was even billed first.” A 1763 review, for example, sounds indistinguishable from those written about young Wolfgang.

Imagine an eleven-year-old girl, performing the most difficult sonatas and concertos of the greatest composers, on the harpsichord or fortepiano, with precision, with incredible lightness, with impeccable taste. It was a source of wonder to many.

18th century classical audiences first came to know Wolfgang as part of a brother-sister duo of “wunderkinder.” But the sister half has been airbrushed out of the picture. She does not appear in the definitive Hollywood treatment, Milos Forman’s Amadeus. And, moreover, she only recently began to emerge in the academic and classical worlds. “I grew up studying to be a violinist,” writes Sylvia Milo. “Neither my music history nor my repertoire included any female composers.”

With my braided hair I was called “little Mozart” by my violin teacher, but he meant Wolfi. I never heard that Amadeus had a sister. I never heard of Nannerl Mozart until I saw that family portrait.

In the portrait (top), Nannerl and Wolfgang sit together at the harpsichord while their father Leopold stands nearby. Nannerl, in the foreground, has an enormous pompadour crowning her small oval face. Of the hairdo, she wrote to her brother, in their typically playful rapport, “I am writing to you with an erection on my head and I am very much afraid of burning my hair.”

After discovering Nanerl, Milo poured through the historical archives, reading contemporary accounts and personal letters. The research gave birth to a one-woman play, The Other Mozart, which has toured for the last four years to critical acclaim. (See a trailer video above). In her Guardian essay, Milo describes Nannerl’s fate: “left behind in Salzberg” when she turned 18. “A little girl could perform and tour, but a woman doing so risked her reputation…. Her father only took Wolfgang on their next journeys around the courts of Europe. Nannerl never toured again.” We do know that she wrote music. Wolfgang praised one composition as “beautiful” in a letter to her. But none of her music has survived. “Maybe we will find it one day,” Milo writes. Indeed, an Australian researcher claims to have found Nannerl’s “musical handwriting” in the compositions Wolfgang used for practice.

Other scholars have speculated that Mozart’s sister, five years his senior, certainly would have had some influence on his playing. “No musicians develop their art in a vacuum,” says musical sociologist Stevan Jackson. “Musicians learn by watching other musicians, by being an apprentice, formally or informally.” The question may remain an academic one, but the life of Nannerl has recently become a matter of popular interest as well, not only in Milo’s play but in several novels, many titled Mozart’s Sister, and a 2011 film, also titled Mozart’s Sister, written and directed by René Féret and starring his daughter in the titular role. The trailer above promises a richly emotional period drama, which—as all entertainments must do—takes some liberties with the facts as we know, or don’t know, them, but which also, like Milo’s play, gives flesh to a significant, and significantly frustrated, historical figure who had, for a couple hundred years, at least, been rendered invisible.