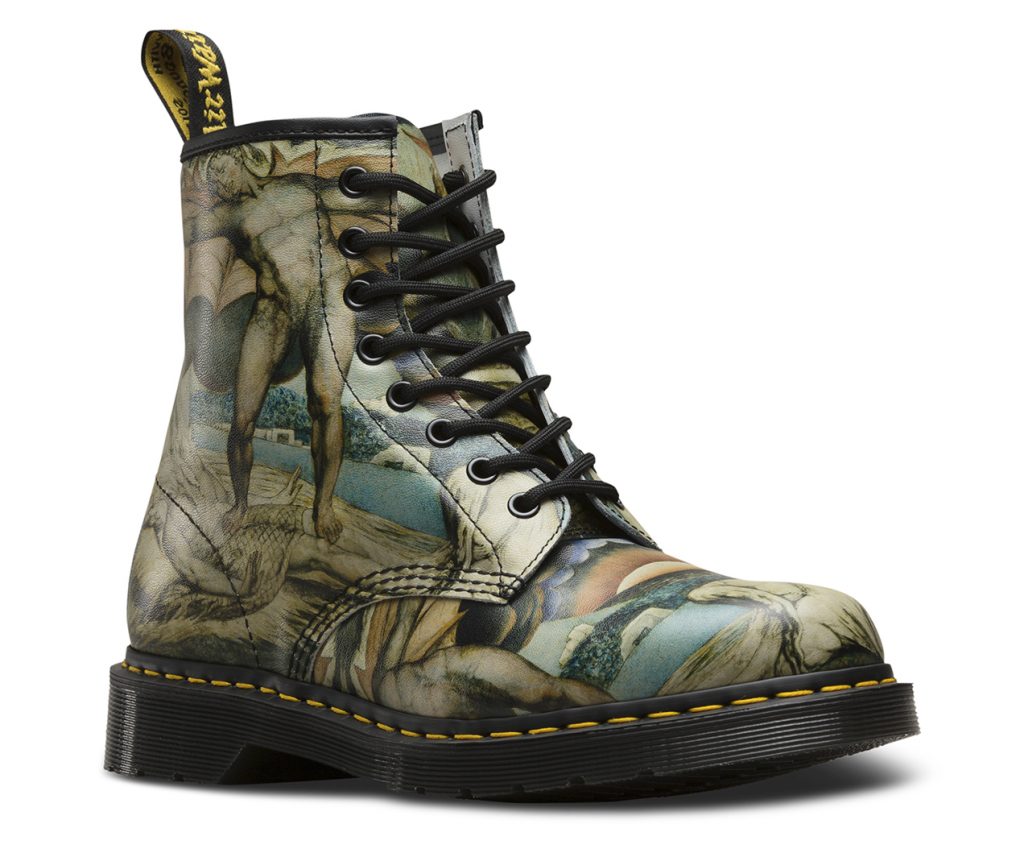 On a recent trip to Portland, I found myself at the city’s flagship Pearl District Dr. Martens’ store and was instantly transported back to much younger days when I scrimped and saved to buy my first pair of “Docs” at the local DC punk boutique. Big and clunky, the boots and shoes have been associated with outsider and alternative culture for decades (and, sadly, through no fault of their own, with neo-Nazis, as a recent Portland controversy reminded). The brand has since applied its “AirWair” sole to styles much less evocative of leather-clad punks, but the originals–the eight-eye “1460” boot and three-eye “1461” shoe–will forever retain their iconic status, in the classic colors of black and “oxblood” red.

“Originally a modest work-boot that was even sold as a gardening shoe,” as the company’s history tells it, the nearly indestructible footwear first achieved cult status in working-class British subcultures in the early days of “glam, punk, Two Tone, and early goth.”

The flamboyance of the Dr. Martens’ clientele gave it license to experiment with unorthodox styles, like shiny patent leather in eye-popping colors, an animal print series and, most recently, an artist series, featuring 1460s and 1461s covered in leather reproductions of paintings by artists like Hieronymus Bosch, Giannicola Di Paolo, and William Hogarth (unfortunately all sold out on their website). 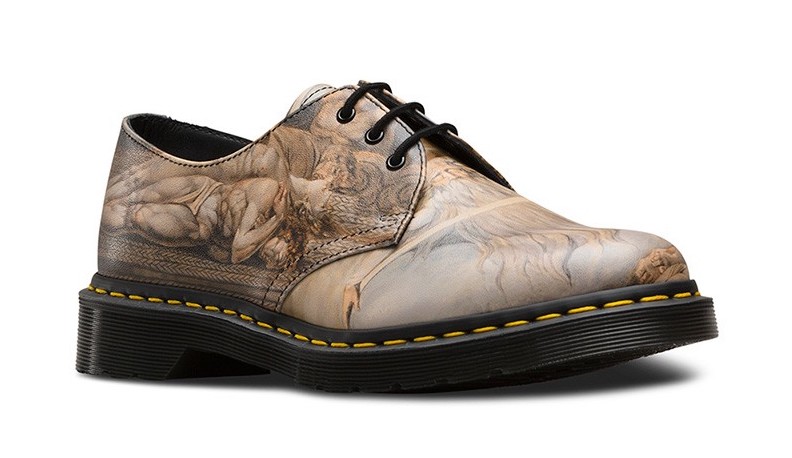 One of the recent additions to this pantheon seems like a perfect fit: the William Blake Docs, offering your “choice of gnostic kicks for a night out,” as Dangerous Minds quips. A partnership with Tate Britain, the boot version is wrapped in Blake’s Satan Smiting Job with Sore Boils (c. 1826) and the shoe displays The House of Death (c. 1795). See both paintings below. 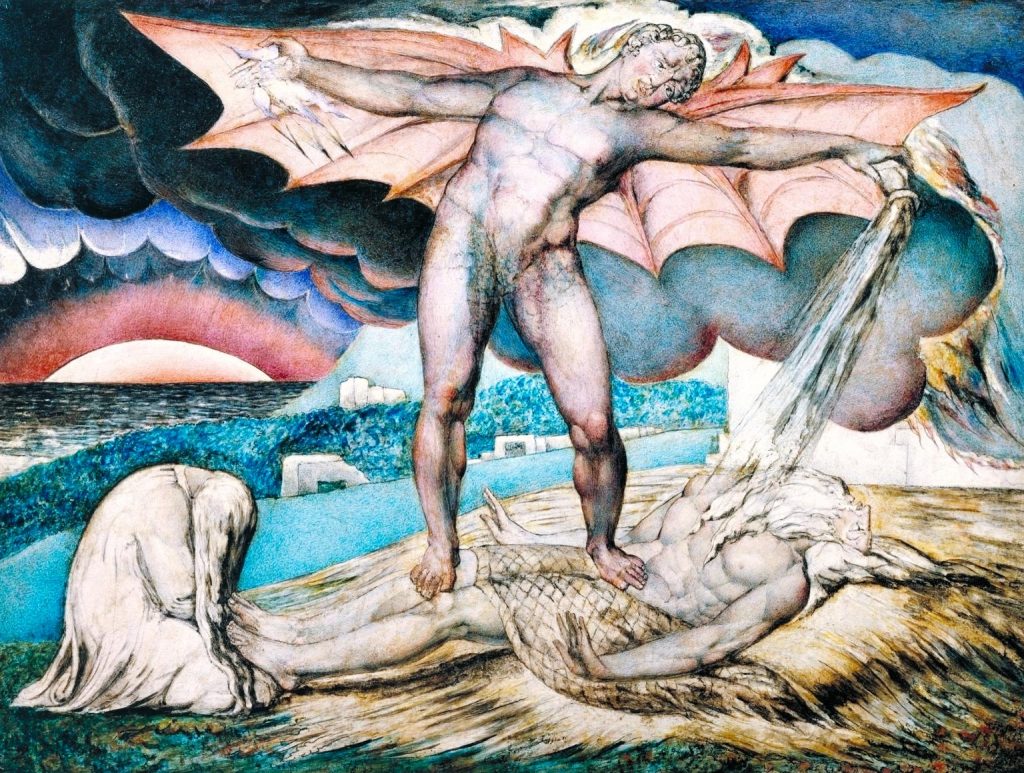 Like another new addition to the artist series—with artwork from J.M.W. Turner—the Blake Dr. Martens draw on the work of a violently original English artist with solidly working-class roots. Unlike his contemporary Turner, Blake spent most of his days in obscurity, creating a DIY visual and poetic mythology rich enough to counter the religious and philosophical hegemony of the day, which was a totally punk rock thing to do in the 18th century. 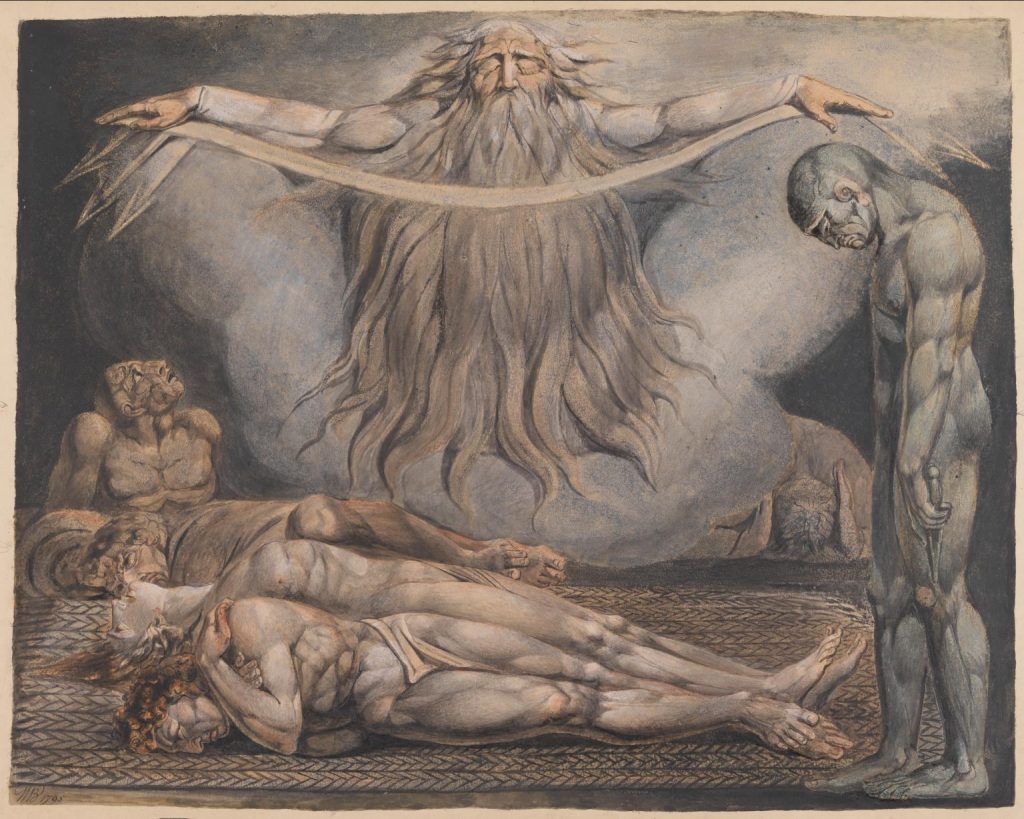 “I must create a system, or be enslaved by another man’s,” Blake wrote. Does the stamping of his iconoclastic artwork on a culturally iconic, commercially successful boot (and shoe, and leather satchel, and T-shirt) mean that he’s been absorbed into exactly the kind of system he spent his life opposing? Isn’t that just punk’s eternal dilemma….

See a short film from Tate Britain celebrating their collaboration with Dr. Martens at the shoemaker’s website and see much more William Blake in the Related Content links below.

If you want to snag your own William Blake Dr. Martens, you can find the 3-Eye Oxfords and 1460 Boot on Amazon.