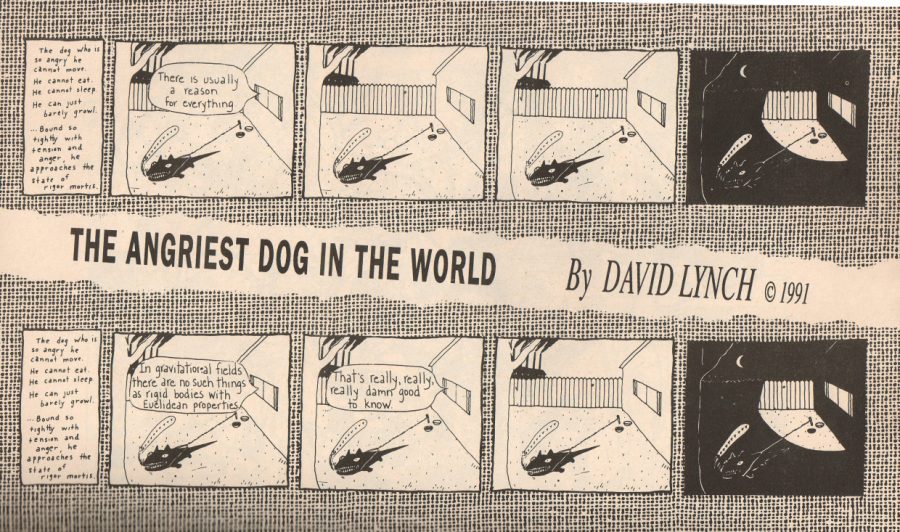 Most David Lynch fans discover him through his films. But those of us who read alternative weekly newspapers in their 1980s and 90s heyday may well have first encountered his work in another medium entirely: the comic strip. Like many of the best-known examples of the form, Lynch’s comic strip stars an animal, specifically a dog, but a dog “so angry he cannot move. He cannot eat. He cannot sleep. He can just barely growl. Bound so tightly with tension and anger, he approaches the state of rigor mortis.” That text, which prepared readers for a reading experience some way from Marmaduke, introduced each and every edition of The Angriest Dog in the World, which ran between 1983 and 1992.

During that entire time, the strip’s artwork never changed either: four panels in which the titular dog strains against a rope staked down in a suburban backyard, in the last of which night has fallen. The sole variation came in the word bubbles that occasionally emerged from the window of the house, presumably representing the voice of the dog’s owners.

You can see a few examples at Lynchnet and also on this blog. “If everything is real… then nothing is real as well,” it says one week. On another: “It must be clear to even the non-mathematician that the things in this world just don’t add up to beans.” Or, in a nod to the region of The Angriest Dog in the World‘s home paper the LA Reader: “Bill… who is this San Andreas? I can’t believe it’s all his fault.”

“At some point David Lynch called up the editor at the time, James Vowell, and said, ‘Hi, I’d like to do a comic strip for you,’” says former Reader editor Richard Gehr as quoted by John F. Kelly at Spooky Comics. Every week thereafter, Lynch would phone the Reader to dictate the text of the latest strip. “We would give it to somebody in the production department and they would White Out the panels from the week before and write in a new, quote/unquote… gag.” The clip from The Incredibly Strange Film Show‘s 1990 episode on Lynch above shows the evolution of the process: someone, one of Lynch’s assistants or perhaps Lynch himself, would regularly slip under the Reader‘s office door an envelope containing word balloons written and ready to paste into the strip. (Dangerous Minds finds an interview where Vowell describes another production method altogether, involving wax paper.)

Lynch came up with the words, but what about the images? “I assume he drew the first iteration,” says Gehr as quoted by Kelly. “I don’t even know if the second and third [panels] were hand drawn. Those could have been mimeographed too or something.” The style does bear a resemblance to that of the town map Lynch drew to pitch Twin Peaks to ABC. The attentive fan can also find a host of other connections between The Angriest Dog in the World and Lynch’s other work. That factory in the background, for instance, looks like a place he’d photograph, or even a setting of Eraserhead, during whose frustrating years-long shoot he came up with the strip’s concept in the first place. “I had tremendous anger,” says Lynch in David Breskin’s book Inner Views. “And I think when I began meditating, one of the first things that left was a great chunk of that.” If only the Angriest Dog in the World could have found it in himself to do the same.