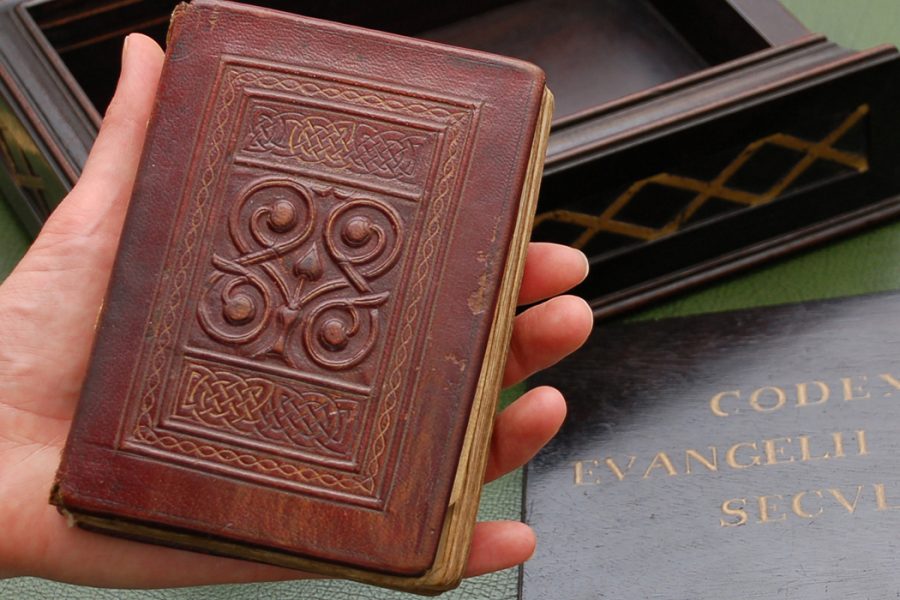 Photo via the British Library

If you’re a British history buff, next month is an ideal time to be in London for the British Library’s “once-in-a-generation exhibition” Anglo-Saxon Kingdoms: Art, Word, War, opening October 19th and featuring the illuminated Lindisfarne Gospels, Beowulf, Bede’s Ecclesiastical History, the “world-famous” Domesday Book, and Codex Amiatinus, a “giant Northumbrian Bible taken to Italy in 716” and returning to England for the first time in 1300 years. But with all of these manuscript stars stealing the show, one special exhibit might go overlooked, the St. Cuthbert Gospel, the oldest surviving intact European book.

A Latin copy of the Gospel of John, the book was originally called the Stonyhurst Gospel, after its first owner, Stonyhurst College. It acquired its current name because it was found inside the coffin of St. Cuthbert, a hermit monk who died in 687 and whose remains, legend has it, were incorruptible. This supposed miracle inspired a cult that placed offerings around Cuthbert’s tomb. Just when and how the small book made its way into his coffin remains a mystery. It was likely sometime between the 700s and 800s CE, when his body was moved to Durham due to Viking raids.

When Cuthbert’s casket was opened in 1104, the book was found “in miraculously perfect condition,” writes the British Library, inside “a satchel-like container of red leather with a badly-frayed sling made of silken threads.” Scholars have dated the book’s creation to between 700 and 730, and its interest for academics and lay people alike lies not only in the legend of St. Cuthbert but in the book’s physical qualities and its own uncorrupted nature. As Allison Meier writes at JSTOR Daily, “the 1,300-year-old manuscript retains its original pages and binding,” a remarkable fact for a book of its age.

Its condition makes it an “important example of Insular art, which was created on the British Isles and Ireland between 600 and 900 CE.” The general features of this style involve “the layering of pattern, line, and color on seemingly flat surfaces,” notes Oxford Bibliographies, in order to create “complex spatial patterns.” Scholar Robert D. Stevick describes these properties on the ornate dyed leather covers of the St. Cuthbert Gospel:

There is interlace pattern in two panels on the front cover, step-pattern implying two crosses on the lower cover, a prominent double vine scroll at the center of the front cover—elements of this early art that have been well catalogued for their individual features as well as for their affinities to similar decorative elements in other artifacts.

Bound with a sewing technique that originated in North Africa (and therefore often called “Coptic sewing”), the “simple but elegant” book, Meier explains, “reflects the transmission of publishing knowledge across Europe” from the Mediterranean. Its small size and placement in a leather pouch is also significant. St. John’s Gospel “was sometimes employed as a protective talisman,” worn in a pouch on the body to ward off evil. Why one of Cuthbert’s admirers would have given such a talisman to his corpse remains unclear.