“Lynchian,” “Kubrickian,” “Tarantinoesque” and 100+ Film Words Have Been Added to the Oxford English Dictionary 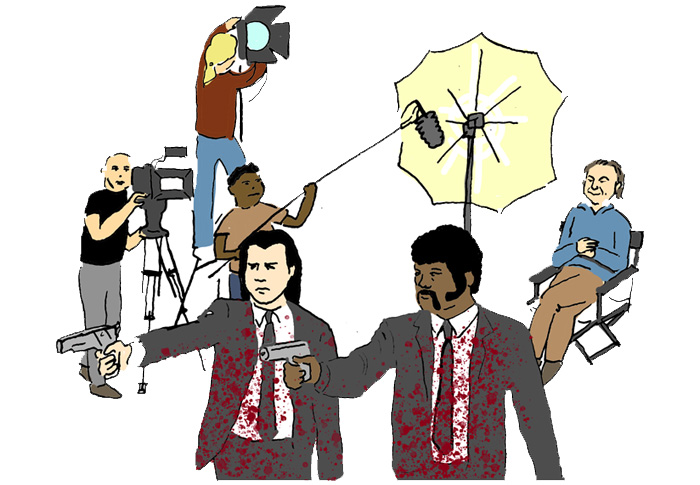 Get interested enough in anything, and you soon discover its language. Each subject, pursuit, and area of culture has its own slang, its own jargon, even its own grammar: that goes as well for physics and fishing as it does for cooking and cinema. Though quite specialized, the vast lexicon of that last has also contributed a great deal to English as generally used. The latest update to the venerable Oxford English Dictionary has added more than 100 of these terms, from already well-known expressions like “edge-of-your-seat,” “not in Kansas anymore,” and “blink and you’ll miss it” to the less-common likes of kaiju (the Japanese battling-monster genre that gave us Godzilla), and Foley (the art of adding incidental sounds to movies in post-production), and gorehound (an enthusiast of the gorefest, a genre whose sensibility you can well imagine).

Many of the new entries have to do with particular directors and their styles. “The list runs through a range of genres and locations, from the wide landscapes of the American West evoked by Fordian to Swedish soul-searching with Bergmanesque,” writes the OED’s Craig Leyland. The oldest, Keatonesque, “dates from 1921, near the start of an extraordinary run of success for the comic actor and film-maker, and typically refers to Keaton’s famous deadpan expression and penchant for physical comedy. The most recent is Tarantinoesque, first seen in 1994 – the year Pulp Fiction appeared in cinemas,” which refers to qualities like “graphic and stylized violence, cineliterate references, non-linear storylines, sharp dialogue, and more – and is a reminder of the impact these films had on cinema in the 1990s.”

Other auteur-specific additions include Spielbergian (“fantastical or humanist themes or a sentimental feel”), Lynchian (“noted for juxtaposing surreal or sinister elements with mundane, everyday environments”), and of course Kubrickian (“meticulous perfectionism, mastery of the technical aspects of film-making, and atmospheric visual style in films across a range of genres”). Several terms denoting broader movements and styles have also made it in, including mumblecore, “a style of low-budget film typically characterized by naturalistic and (apparently) improvised performances and a reliance on dialogue rather than plot or action” which emerged about a decade ago, and Hammer, denoting the horror films made from the 1950s to the 70s by British production company of that name, “still famous and loved for their lurid, melodramatic style.”

Master these words and you’ll surely hold your own in casual cinephile conversation. But you can only get so deep into talking about movies if you can’t confidently bring out terms like arc shot, diegetic, and mise-en-scène. As one of the most capacious art forms, cinema brings together a number of languages all at once, including the visual language as defined by directors like Soviet montage pioneer Sergei Eisenstein (he of Eisensteinian) and the language the screenplay gives its characters to speak (an especially distinctive element in the case of filmmakers like Tarantino). But those are essentially solitary pleasures, enjoyed in a darkened theater or living room. Isn’t one of the most enduring joys of filmgoing talking about the movies with other people later — and to sound as expert as possible while doing so?

What Makes a David Lynch Film Lynchian: A Video Essay

How the Sounds You Hear in Movies Are Really Made: Discover the Magic of “Foley Artists”