Researchers Recreate the Sounds Worshippers Heard in the Mosque of Cordoba Over 1,200 Years Ago 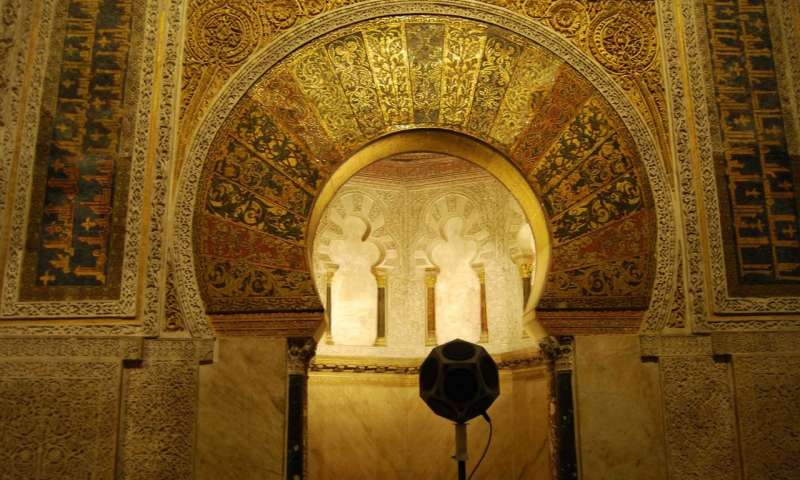 As we know from conversations in subway tunnels or singing in the shower, different kinds of spaces and building materials alter the quality of a sound. It’s a subject near and dear to architects, musicians, and composers. The relationship between space and sound also centrally occupies the field of “Acoustic Archeology.” But here, an unusual problem presents itself. How can we know how music, voice, and environmental sound behaves in spaces that no longer exist?

The architecture of the 8th century building is lost to history, and so, it would seem, is its careful sound design. “Unlike fragments of tools or shards of pottery,” Atlas Obscura’s Jessica Leigh Hester notes, “sounds don’t lodge themselves in the soil.” Archeo-acousticians do not have recourse to the material artifacts archeologists rely on in their reconstructions of the past. But, given the technological developments in reverb simulation and audio software, these scientists can nonetheless approximate the sounds of ancient spaces.

In this case, University of Seville’s Rafael Suárez and his collaborators in the research group “Architecture, Heritage and Sustainability” collected impulse responses—recordings of reverberation—from the current cathedral. “From there, they used software to reconstruct the internal architecture of the mosque during four different phases of construction and renovation…. Next, they produced auralizations, or sound files replicating what worshippers would have heard.”

To hear what late-8th century Spanish Muslims would have, “researchers used software to model how the architecture would change the same snippet of a recorded salat, or daily prayer. In the first configuration, the prayer sounds full-bodied and sonorous; in the model that reflects the mosque’s last renovation, the same prayer echoes as though it was recited deep inside a cave.” All of those renovations, in other words, destroyed the sonic engineering of the mosque.

As the authors write in a paper recently published in Applied Acoustics, “the enlargement interventions failed to take the functional aspect of the mosque and gave the highest priority to mainly the aesthetic aspect.” In the simulation of the mosque as it sounded in the 780s, sound was intelligible all over the building. Later construction added what the researchers call “acoustic shadow zones” where little can be heard but echo.

Unlike Hagia Sofia, the Byzantine cathedral-turned-mosque, which retained its basic design over the course of almost 1500 years, and thus its basic sound design, the Mosque-Cathedral of Cordoba was so altered architecturally that a “significant deterioration of the acoustic conditions” resulted, the authors claim. The mosque’s many remaining visual elements would be familiar to 8th century attendees, writes Hester, including “gilt calligraphy and intricate tiles… and hundreds of columns—made from jasper, onyx, marble, and other stones salvaged from Roman ruins.” But the “acoustic landscape” of the space would be unrecognizable.

The specific sounds of a space are essential to making “a place feel like itself.” Something to consider the next time you’re planning a major home renovation.

The Same Song Sung in 15 Places: A Wonderful Case Study of How Landscape & Architecture Shape the Sounds of Music