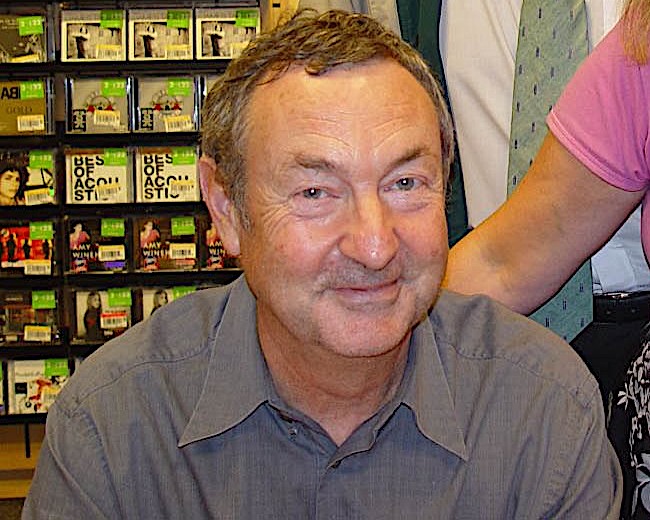 If you’ve seen Pink Floyd in the news lately, it’s maybe because guitarist David Gilmour recently put up his collection of over 120 guitars for a charity auction, fetching “certifiably insane” prices like a whopping $3.975 million for the famous black Strat played on Dark Side of the Moon. (The guitar now “wears the crown as the world’s most expensive six string,” notes Enmore Audio.)

But there’s more going on with ex-Pink Floyd members than Gilmour’s guitars or Roger Waters’ political activism. Drummer Nick Mason, long renowned post-Floyd for his hugely expensive car collection, has taken on another role this month: as a podcast host and music historian in a nine-part series for the Open University/BBC production, The Documentary Podcast.

Titled A History of Music in Technology, Mason’s series covers an awful lot of ground, “charting the history of music and technology and exploring the world of legendary artists, producers and inventors. The series shines a light on game-changing innovations including the synthesizer, electric guitar, samplers, drum machines and the recording studio itself.”

A History of Music in Technology finishes its run tomorrow. Currently, you can stream all but the final installment at BBC News, Apple podcasts, and Stitcher. The first episode— “Sound Recording”—which you can hear above, begins in prehistory. Long before the technology for reproducing sound could be imagined, early humans showed keen interest in the acoustic properties of caves, as University of North Carolina professor Mark Katz explains.

“I think people have always had an infatuation with trying to hold on to [sound], to modify it, to capture it,” says Katz—whether that meant seeking out the best settings for prehistoric drum circles or building structures like cathedrals with specially-designed sonic properties. But for thousands of years, the only way to preserve music was to write it down in notation.

It took until “the back half of the 19th century,” says Mason, “before credible attempts were made to bottle sound for the first time.” (Those very first attempts could record sound but could not play it back.) From the early technological achievements, it’s a long series of leaps, bounds, zig zags, stumbles, and circling back around to find ways not only to record sound but also to amplify and modify it and create it wholesale from electrical signals.

Above and below, you can hear Mason’s hour-long history of the electric guitar (Episode 3), the synthesizer (Episode 5), and samplers and drum machines (Episode 6). Mason dedicates two episodes, 7 and 8, to the development of the recording studio itself—unsurprising for a member of Pink Floyd, a band who, like Hendrix, the Beach Boys, and the Beatles, crafted the essence of their psychedelic sound from studio experiments.

“When sound recording first emerged,” says Mason in “The Studio Part 1” intro, “critics claimed it could be the end of music.” For the dozens of new genres recording and production technology has enabled, it was only the very beginning. Those of us who see computers killing the spontaneity of rock and roll, for example, or the very humanity of music itself, might reflect on how our reactions mirror those of some myopic early critics.

American composer John Philip Sousa, for example, saw recording as “reducing the expression of music to a mathematical system of wheels, cogs, discs, and cylinders,” language that sounds very like the complaints of current-day purists. Maybe artificial intelligence will never write a great love song, but it will most certainly help humans create music as unimaginable to us today as the syncopated thump of electronic music would have been unimaginable to Sousa, king of syncopated brass band marches.

Luddites and technophiles and everyone in-between will learn much from Mason’s series, and the kind of musical education he’s offering—replete with expert informed opinion from scholars and musicians like himself—will go a long way to preparing us for a musical future we might only dimly glimpse now in the most innovative technologies Mason is sure to cover in his final episode