A Medieval Metropolis Existed In What’s Now St. Louis, Then Mysteriously Disappeared in the 14th Century 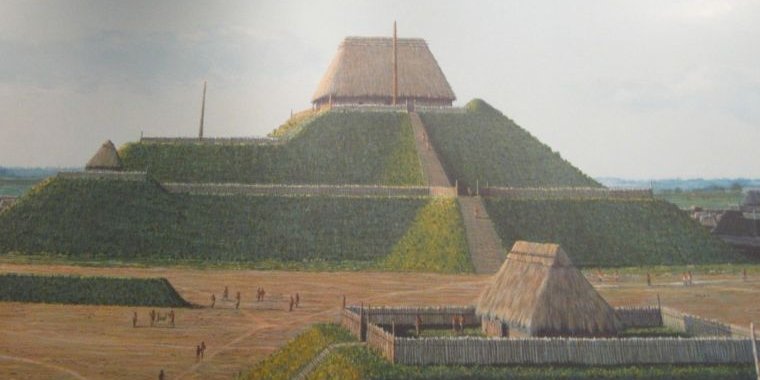 In our current epoch of human history, when populations of major cities swell into the tens of millions, an urban center of 30,000 people doesn’t seem very impressive. 1,000 years ago, a city that size was larger than London or Paris, and sat atop what is now East St. Louis. At its height in 1050, Annalee Newitz writes at Ars Technica, “it was the largest pre-Colombian city in what became the United States…. Its colorful wooden homes and monuments rose along the eastern side of the Mississippi, eventually spreading across the river to St. Louis.”

It is called Cahokia, but that name comes from later inhabitants who themselves didn’t know who built the ancient metropolis, Roger Kaza explains, “We really have no idea what the builders called their city.” Also, no one, including the people who settled there not long afterward, knows what happened to the city’s inhabitants. Archaeologists call these lost indigenous societies the Mississippians.

They occupied a territory along the river of nearly 1,600 hectares during what is called the Mississippian period, roughly between 800 and 1400 A.D. The society built mounds, “some 120,” notes UNESCO, who have designated Cahokia a world heritage site. (See an introductory video below from the Cahokia Mounds Museum Society and two artist recreations elsewhere on this page.) The largest of these mounds, Monk’s Mound, stands 30 meters high.

Cahokia is “a striking example of a complex chiefdom society, with many satellite mound centres and numerous outlying hamlet and villages.” Size estimates vary. UNESCO’s is more conservative “This agricultural society may have had a population of 10-20,000 at its peak between 1050 and 1150,” they write—still, at any rate, a major city at the time. The Mississippian civilization left behind “pottery, ceremonial art, games and weapons,” Kaza notes. “Their trade network was vast, stretching from the Great Lakes to the Gulf of Mexico.”

The mounds were a symbol of both earthly and religious power, and the city appears to have been a pilgrimage site of some kind, with remains of what may have been a 5,000 square foot temple at the top of Monk’s Mound and evidence of human sacrifice on other mounds. “A circle of posts west of Monk’s Mound has been dubbed ‘Woodhenge,’ because the posts clearly mark solstices and equinoxes,” writes Kaza. 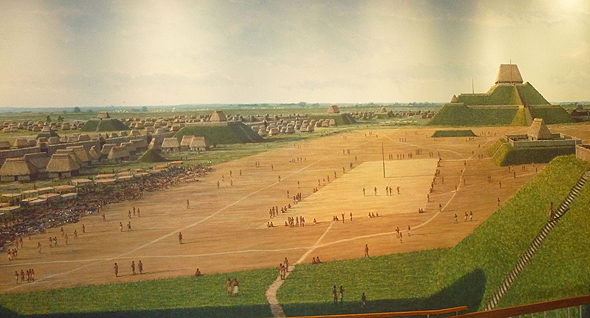 But the true strength of Cahokia, as in all great metropolises, was economic power. As archaeologist Timothy Pauketat of the University of Illinois notes, “it just so happens that some of the richest agricultural soils in the midcontinent are right up against that area of Cahokia.” Corn grew plentifully, produced surpluses, and the society grew rich. Then, seemingly inexplicably, it collapsed. “By the time European colonizers set foot on American soil in the 15th century, these cities were already empty,”

Pauketat finds this explanation persuasive, but insufficient. Politics and culture played a role. It’s possible, says archeologist Jeremy Wilson, who coauthored the recent climate paper, that “the climate change we have documented may have exacerbated what was an already deteriorating sociopolitical situation.”

Evidence suggests mounting conflict and violence as food grew scarcer. Climatologist Broxton Bird argues that the Mississippians left their cities and “migrated to places farther south and east like present-day Georgia,” Angus Chen writes at NPR, “where conditions were less extreme. Before the end of the 14th century, the archaeological record suggests Cahokia and other city-states were completely abandoned.”

We should be careful of seeing in this contemporary language any close parallels to the situation major cities face in the 21st century. Just one link in the global supply chain that drives climate change today can employ 10,000-20,000 people. But perhaps it’s possible to see, in the distant indigenous past of North America, the not-so-future vision of a migratory future for the inhabitants of many cities around the world.

via Art Technica and Messy Nessy