Throughout the years, a number of iconic photographs have tapped into the collective unconscious, shaping our view of historic events, sometimes to a degree that leads to social change.

These images are not dependent on knowing the subjects’ identities, though it’s always interesting when more context leaks out, often as the result of some serious sleuthing by reporters, archivists, or other interested parties.

1932’s “Lunch atop a Skyscraper (New York Construction Workers Lunching on a Crossbeam)” is one of the lighter-hearted photos to create such a lasting public impression.

Eleven workers are depicted enjoying their break, relaxing on a girder a dizzying 840-feet above New York City, unburdened by safety harnesses or other protective gear.

In the words of Rockefeller Center archivist Christina Roussel, who narrates the TIME Magazine 100 Photos episode above, they are the “unsung heroes of construction.”

The unusual designation may lead you to rack your brains for a sung hero of construction.

Grandpa’s cog-in-the-wheel contribution to the erection of an iconic landmark can be a source of anecdotal pride for families, but it rarely leads to greater renown.

Looming over this image is John D. Rockefeller, Jr, who masterminded a 22 acre complex of 14 commercial buildings in the Art Deco style. The project was a boost to the economy during the Great Depression, employing over 250,000 people—from truckers and quarrymen to glaziers and steelworkers and hundreds of other jobs in between. It created an enormous amount of goodwill and patriotic pride.

The Rockefeller organization capitalized on this positive reception, with a steady stream of staged publicity photos, including the daring eleven sharing a nosebleed seat on what was to become the 69th floor of the RCA Building (now known as 30 Rock.)

The popularity of the picture, which has been colorized, satirized, burlesqued with the Muppets and turned into a life-size sculpture by Sergio Furnari, is partly about the casual recklessness of its subjects: The beam on which they sit seems suspended over an urban abyss, with the vastness of Central Park spread out behind them and nothing, seemingly below. But in fact a finished floor of 30 Rockefeller Plaza was probably just a few feet away.

The documentary helped confirm the identities of several of the men.

Irish immigrants Maddy O’Shaughnessy and Sonny Glynn hold down either end, as verified by their sons. 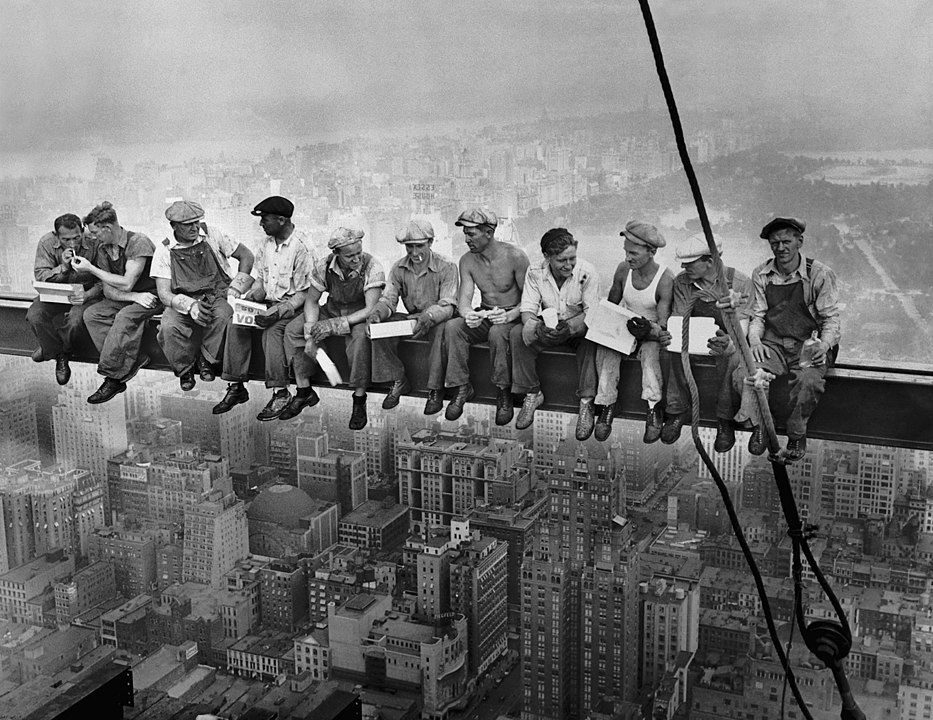 William Eckner, third from left, and Joe Curtis, third from right, were named in a similarly spirited annotated photo taken around the same time.

The man seated to Curtis’ right may or may not be John Charles Cook of the St. Regis Mohawk Reservation.

The photographer’s identity is also debatable. It’s most often credited to Charles C. Ebbets but Tom Kelley and William Leftwich were also on hand that day, leather satchels of glass plates slung across their backs, as they, too, defied gravity, documenting the completion of architect Raymond Hood’s master plan.