Eno: A 1973 Mini-Doc Shows Brian Eno at the Beginning of His Solo Career 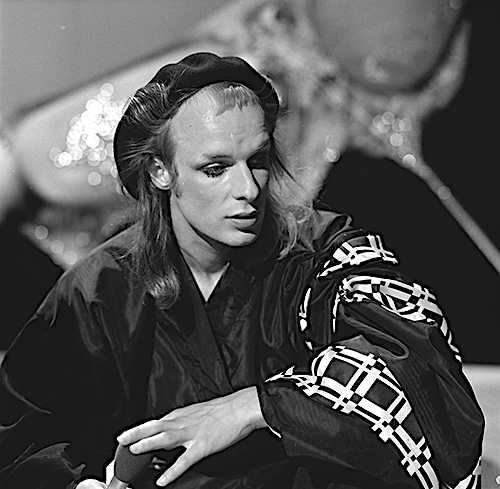 We’ve seen bits and pieces of the 1973 mini-doc Eno over the years, as it is such a rare and wonderful glimpse into the very beginnings of Brian Eno’s career, and being the go-to footage for any doc about the man. Over the course of the film, we see Eno assembling/recording “The Paw-Paw Negro Blowtorch”, the second track on his debut album Here Come the Warm Jets. Right from the beginning, we see that Eno was true to his word and using the recording studio as an instrument. With Derek Chandler by his side engineering, we see Eno layering one sound after another, removing others, much like a painter. If you know the track, you notice it take form and shape, but there are things that would later be “painted over,” like a sitar solo (!) where the wigged out oscillator solo now sits. The film opens with Eno playing an arpeggiated bass line on a piano that also doesn’t make it into the song. (The bass instead is supplied by Busta Jones, seen playing a two note riff with a lot of feeling.) Chris Spedding stops by to play “something purely Duane Eddy” on his guitar, asking Eno “you’ll treat it later?” “Probably,” says Eno. (More like definitely).

“I have attempted to replace the element of skill considered necessary in music with the element of judgement,” Eno says early in the film, and a listen to the finished track reveals that judgement. And what do you know–the sitar *is* there, as are the piano lines, like a space in the canvas where the original sketch can be seen.

We also get an amazing, extended glimpse at Eno’s notebooks, which have popped up in various books on Eno, including More Dark Than Shark and Visual Music. From the profane to the profound, from drawings of genitals to detailed analog system diagrams, it’s all here, and as far as we know the notebooks, which he started at 14, continue to this day.

The film also makes the case for a later Eno theory, that of the “scenius,” which he once described thus: “’Scenius stands for the intelligence and the intuition of a whole cultural scene. It is the communal form of the concept of the genius.’”

For Eno in 1973, the scenius is the Portobello Road area where he can browse thrift stores, run into friends, and check in on designer/girlfriend Carol McNicoll, who made all Eno’s glam outfits. And he also talks about how Robert Fripp just stopped by on his way home one night and recorded side one of their team-up album No Pussyfooting.

All in all a terrific look into the beginning of an artistic legacy, and a film that desperately needs a pristine new transfer. (And no, you will never convince me that the Portsmouth Sinfonia is any good.)

Brian Eno Explains the Loss of Humanity in Modern Music

Discover the Apprehension Engine: Brian Eno Called It “the Most Terrifying Musical Instrument of All Time”