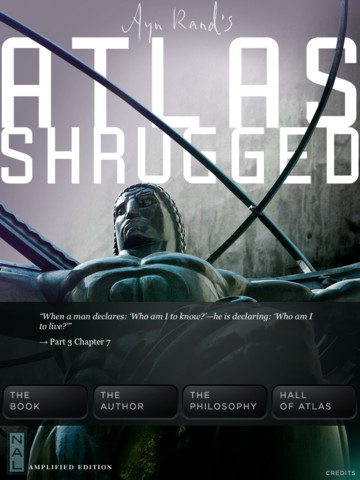 William F. Buckley famously said that he flogged himself to get through Atlas Shrugged, and now you can too in grand style. This week, Penguin released Ayn Rand’s politically-influential novel as an iPad app. It will run you $14.99, but it brings together “the classic, unabridged text and a treasury of rarely-seen archival materials,” including original manuscript pages, video of Rand’s talks, audio lectures elucidating the book, a photo gallery, and the rest. And, oh happy day, the app lets you share quotes from Atlas Shrugged on Facebook and Twitter too.

If Atlas Shrugged isn’t your cup of tea, if you’re looking for a different kind of meditation on freedom, then Penguin might have something else for you — the bible of the counter culture, Jack Kerouac’s On the Road, is now available as an “amplified” iPad app as well.

Finally, if you’re looking for a free angle here, you can always download these novels as free audiobooks if you start a no-strings-attached free trial with Audible.com.