Perhaps no one single person has had such widespread influence on the countercultural turns of the 20th century as Cambridge-educated occultist and inventor of the religion of Thelema, Aleister Crowley. And according to Crowley, he isn’t finished yet. “1000 years from now,” Crowley once wrote, “the world will be sitting in the sunset of Crowlianity.” The self-aggrandizing Crowley called himself “the Great Beast 666” and many other tongue-in-cheek apocalyptic titles. The British press dubbed him “The Wickedest Man in the World,” also the title of the above documentary, one of a four-part BBC 4 series on famously sinister figures called “Masters of Darkness.” Crowley is perhaps most famous for his dictum “Do what thou wilt,” which, taken out of its context, seems to be a philosophy of absolute, unfettered libertinism.

It’s no surprise that the particular treatment of Crowley’s life above adopts the tabloid description of the magician. The documentary—with its ominous music and visual effects reminiscent of American Horror Story’s jarring opening credits—takes the sensationalistic tone of true crime TV mixed with the dim lighting and hand-held camerawork of paranormal, post-Blair Witch entertainments. And it may indeed take some liberties with Crowley’s biography. When we’re told by the voice-over that Crowley was a “black magician, drug fiend, sex addict, and traitor to the British people,” we are not disposed to meet a very likable character. Crowley would not wish to be remembered as one anyway. But despite his pronounced disdain for all social conventions and pieties, his story is much more complicated and interesting than the cardboard cutout villain this description suggests.

Born Edward Alexander Crowley in 1875 to wealthy British Plymouth Brethren brewers, Crowley very early set about replacing the religion of his family and his culture with a variety of extreme endeavors, from mountaineering to sex magic and all manner of practices derived from a synthesis of Eastern religions and ancient and modern demonology. The results were mixed. All but the most adept find most of his occult writing incomprehensible (though it’s laced with wit and some profundity). His raunchy, hysterical poetry is frequently amusing. Most people found his overbearing personality unbearable, and he squandered his wealth and lived much of life penniless. But his biography is inarguably fascinating—creepy but also heroic in a Faustian way—and his presence is nearly everywhere inescapable. Crowley traveled the world conducting magical rituals, writing textbooks on magic (or “Magick” in his parlance), founding esoteric orders, and interacting with some of the most significant artists and occult thinkers of his time. 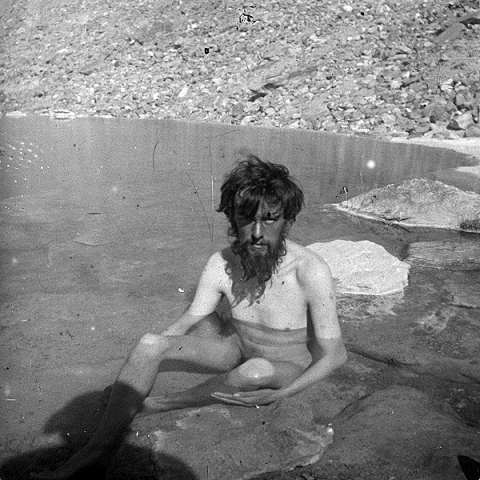 As a mountaineer, Crowley co-lead the first British expedition to K2 in 1902 (the photo above shows him during the trek). As a poet, he published some of the most scandalous verse yet printed, under the name George Archibald Bishop in 1898. During his brief sojourn in the occult society Hermetic Order of the Golden Dawn, he exerted some influence on William Butler Yeats, if only through their mutual antipathy (Crowley may have inspired the “rough beast” of Yeats’ “The Second Coming”). He’s indirectly connected to the development of the jet propulsion system—through his American protégée, rocket scientist Jack Parsons—and of Scientology, through Parsons’ partner in magic (and later betrayer), L. Ron Hubbard.

Though accused of betraying the British during the First World War, it appears he actually worked as a double agent, and he had many ties in the British intelligence community. Crowley rubbed elbows with Aldous Huxley, Alfred Adler, Roald Dahl, and Ian Fleming. After his death in 1947, his life and thought played a role in the work of William S. Burroughs, The Beatles, Led Zeppelin, the Rolling Stones, David Bowie, Ozzy Osbourne, Robert Anton Wilson, Timothy Leary, Genesis P-Orridge, and countless others. Crowley pops up in Hemingway’s A Movable Feast and he has inspired a number of literary characters, in for example Somerset Maugham’s The Magician and Christopher Isherwood’s A Visit to Anselm Oakes. 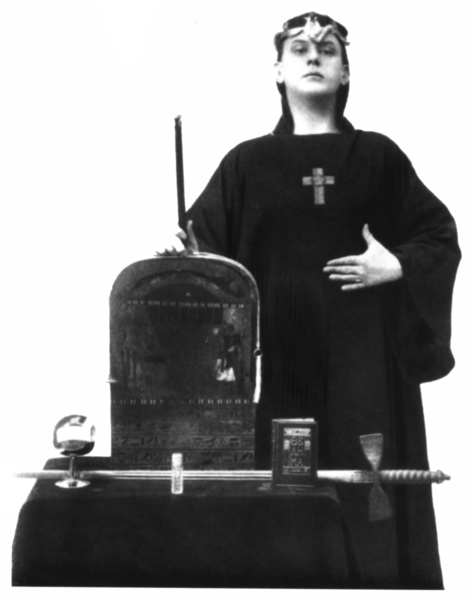 So who was Aleister Crowley? A sexually liberated genius, a spoiled, egomaniacal dilettante, a campy charlatan, a skeptical trickster, a cruel and abusive manipulator, a racist misogynist, a Nietzschean superman and “icon of rebellion” as the narrator of his story above calls him? Some part of all these, perhaps. A 1915 Vanity Fair profile put it well: “a legend has been built up around his name. He is a myth. No other man has so many strange tales told of him.”

As with all such notorious, larger-than-life figures, who Crowley was depends on whom you ask. The evangelical Christians I was raised among whispered his name in horror or pronounced it with a sneer as a staunch and particularly insidious enemy of the faith. Various New Age groups utter his name in reverence or mention it as a matter of course, as physicists reference Newton or Einstein. In some countercultural circles, Crowley is a hip signifier, like Che Guevara, but not much more. Dig into almost any modern occult or neo-pagan system of thought, from Theosophy to Wicca, and you’ll find Crowley’s name and ideas. Whether one’s interest in “The Great Beast” is of the prurient variety, as in the investigation above, or of a more serious or academic bent, his legacy offers a bountiful plenty of bizarre, repulsive, intriguing, and completely absurd vignettes that can beggar belief and compel one to learn more about the enigmatic, pan-sexual black magician and self-appointed Antichrist.

How to Operate Your Brain: A User Manual by Timothy Leary (1993)