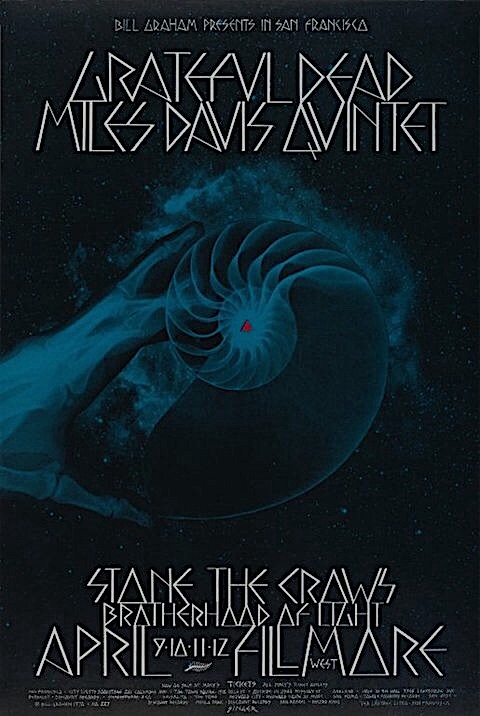 What’s that, you ask? Did Miles Davis open for the Grateful Dead at the Fillmore West? In what world could such a thing happen? In the world of the late sixties/early seventies, when jazz fused with acid rock, acid rock with country, and pop culture took a long strange trip. The “inspired pairing” of the Dead with Davis’ electric band on April 9-12, 1970, “represented one of [promoter] Bill Graham’s most legendary bookings,” writes the blog Cryptical Developments. I’ll say. Davis had just released the groundbreaking double-LP Bitches Brew and was “at somewhat of an artistic and commercial crossroads,” experimenting with new, more fluid compositions.

Aggressive and dominated by rock rhythms and electric instruments, the album became Davis’ best seller and brought him before young, white audiences in a way his earlier work had not.  The band that Davis brought into the Fillmore West, comprising [Chick] Corea, [Dave] Holland, soprano sax player Steve Grossman, drummer Jack Dejohnette, and percussionist Airto Moreira, was fully versed in this new music, and stood the Fillmore West audiences on their ears.

In his autobiography, Davis described it as “an eye-opening concert for me.” “The place was packed with these real spacy, high white people,” he wrote, “and when we first started playing, people were walking around and talking.” Once the band got into the Bitches Brew material, though, “that really blew them out. After that concert, every time I would play out there in San Francisco, a lot of young white people showed up at the gigs.”

Did the Dead become a crossover hit with jazz fans? Not exactly, but Davis really hit it off with them, especially with Jerry Garcia. “I think we all learned something,” Davis wrote: “Jerry Garcia loved jazz, and I found out that he loved my music and had been listening to it for a long time.” In his autobiography, the Dead’s Phil Lesh remembered having his mind blown by Davis and band: “As I listened, leaning over the amps with my jaw hanging agape, trying to comprehend the forces that Miles was unleashing onstage, I was thinking What’s the use. How can we possibly play after this? […] With this band, Miles literally invented fusion music. In some ways it was similar to what we were trying to do in our free jamming, but ever so much more dense with ideas – and seemingly controlled with an iron fist, even at its most alarmingly intense moments.” You can stream the Dead’s full performance from that night below. Think what must have been running through their minds as they took the stage after watching Miles Davis invent a new form of music right before their eyes.