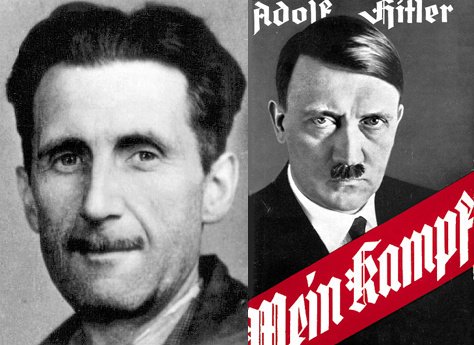 Christopher Hitchens once wrote that there were three major issues of the twentieth century — imperialism, fascism, and Stalinism — and George Orwell proved to be right about all of them.

Orwell displays his remarkable foresight in a fascinating book review, published in March 1940, of Adolf Hitler’s notorious autobiography Mein Kampf. In the review, the author deftly cuts to the root of Hitler’s toxic charisma, and, along the way, anticipates themes to appear in his future masterpieces, Animal Farm and 1984.

The fact is that there is something deeply appealing about him. […] Hitler … knows that human beings don’t only want comfort, safety, short working-hours, hygiene, birth-control and, in general, common sense; they also, at least intermittently, want struggle and self-sacrifice, not to mention drums, flags and loyalty-parades. However they may be as economic theories, Fascism and Nazism are psychologically far sounder than any hedonistic conception of life.

Yet Orwell was certainly no fan of Hitler. At one point in the review, he imagines what a world where the Third Reich succeeds might look like:

What [Hitler] envisages, a hundred years hence, is a continuous state of 250 million Germans with plenty of “living room” (i.e. stretching to Afghanistan or there- abouts), a horrible brainless empire in which, essentially, nothing ever happens except the training of young men for war and the endless breeding of fresh cannon-fodder.

The article was written at a moment when, as Orwell notes, the upper class was backpedaling hard against their previous support of the Third Reich. In fact, a previous edition of Mein Kampf — published in 1939 in England — had a distinctly favorable view of the Führer.

“The obvious intention of the translator’s preface and notes [was] to tone down the book’s ferocity and present Hitler in as kindly a light as possible. For at that date Hitler was still respectable. He had crushed the German labour movement, and for that the property-owning classes were willing to forgive him almost anything. Then suddenly it turned out that Hitler was not respectable after all.”

By March 1940, everything had changed, and a new edition of Mein Kampf, reflecting changing views of Hitler, was published in England. Britain and France had declared war on Germany after its invasion of Poland but real fighting had yet to start in Western Europe. Within months, France would fall and Britain would teeter on the brink. But in the early spring of that year, all was pretty quiet. The world was collectively holding its breath. And in this moment of terrifying suspense, Orwell predicts much of the future war.

When one compares his utterances of a year or so ago with those made fifteen years earlier, a thing that strikes one is the rigidity of his mind, the way in which his world-view doesn’t develop. It is the fixed vision of a monomaniac and not likely to be much affected by the temporary manoeuvres of power politics. Probably, in Hitler’s own mind, the Russo-German Pact represents no more than an alteration of timetable. The plan laid down in Mein Kampf was to smash Russia first, with the implied intention of smashing England afterwards. Now, as it has turned out, England has got to be dealt with first, because Russia was the more easily bribed of the two. But Russia’s turn will come when England is out of the picture — that, no doubt, is how Hitler sees it. Whether it will turn out that way is of course a different question.

In June of 1941, Hitler invaded Russia, in one of the greatest strategic blunders in the history of modern warfare. Stalin was completely blindsided by the invasion and news of Hitler’s betrayal reportedly caused Stalin to have a nervous breakdown. Clearly, he didn’t read Mein Kampf as closely as Orwell had.

You can read the full review here.

For 95 Minutes, the BBC Brings George Orwell to Life