Sigmund Freud Writes to Concerned Mother: “Homosexuality is Nothing to Be Ashamed Of” (1935) 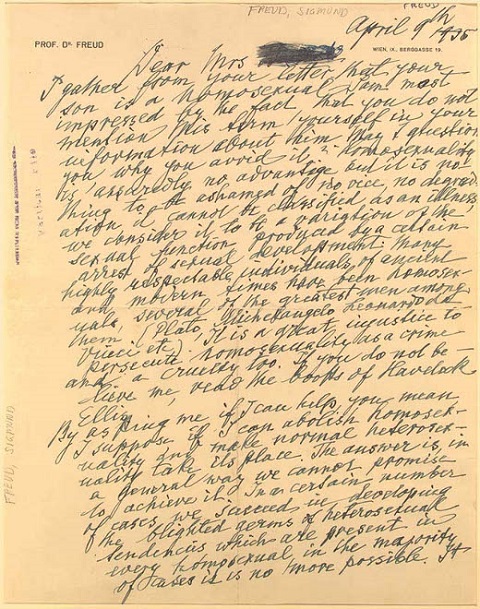 Hank Green, hosting his Crash Course on Psychology, put it best: when we think of the study of the mind, we think of an old, bespectacled bearded man puffing on a pipe. We think, in other words, of Sigmund Freud, whether we know anything about him or not. Despite publishing such very real and still reasonably well-known works as The Interpretation of Dreams, Beyond the Pleasure Principle, and Civilization and its Discontents, the man has somehow passed partially into the realm of popular myth: we think of him at once as an influential pioneer in a little-explored intellectual field, and as something of an idée fixe-hobbled charlatan as well. Perhaps, like many universally recognized 20th-century figures, he combined rightness and wrongness in some kind of irresistible proportion. But the letter above, featured at Letters of Note, demonstrates that, at least on the issue of homosexuality, he had indeed drawn a correct conclusion well before most anyone else.

In 1935, says that post, Freud “was contacted by a worried mother who was seeking treatment for her son’s apparent homosexuality. Freud, who believed that all humans are attracted to both sexes in some capacity, responded with the following letter of advice.”

I gather from your letter that your son is a homosexual. I am most impressed by the fact that you do not mention this term yourself in your information about him. May I question you why you avoid it? Homosexuality is assuredly no advantage, but it is nothing to be ashamed of, no vice, no degradation; it cannot be classified as an illness; we consider it to be a variation of the sexual function, produced by a certain arrest of sexual development. Many highly respectable individuals of ancient and modern times have been homosexuals, several of the greatest men among them. (Plato, Michelangelo, Leonardo da Vinci, etc). It is a great injustice to persecute homosexuality as a crime – and a cruelty, too. If you do not believe me, read the books of Havelock Ellis.

By asking me if I can help, you mean, I suppose, if I can abolish homosexuality and make normal heterosexuality take its place. The answer is, in a general way we cannot promise to achieve it. In a certain number of cases we succeed in developing the blighted germs of heterosexual tendencies, which are present in every homosexual in the majority of cases it is no more possible. It is a question of the quality and the age of the individual. The result of treatment cannot be predicted.

What analysis can do for your son runs on a different line. If he is unhappy, neurotic, torn by conflicts, inhibited in his social life, analysis may bring him harmony, peace of mind, full efficiency, whether he remains a homosexual or gets changed. If you make up your mind he should have analysis with me — I don’t expect you will — he has to come over to Vienna. I have no intention of leaving here. However, don’t neglect to give me your answer.

Sincerely yours with best wishes,

While mainstream western thought no longer expects that homosexuals might, under any circumstances, “get changed,” it has aligned to Freud’s view in the sense of regarding their orientation as “nothing to be ashamed of, no vice, no degradation.” And from what I can see, humanity now enjoys the presence of more such “highly respectable individuals” who publicly acknowledge their own non-heterosexuality than ever before. Freud’s letter to this concerned American mother of the 1930s, in any case, brings nuance to the cartoon image we all have of him — the obsession with dreams, the insistence on diagnosing repression, the whole deal with cigar symbolism — just as his view of homosexuals would have brought nuance to the cartoon image this and other concerned American mothers of the 1930s might have had of them.