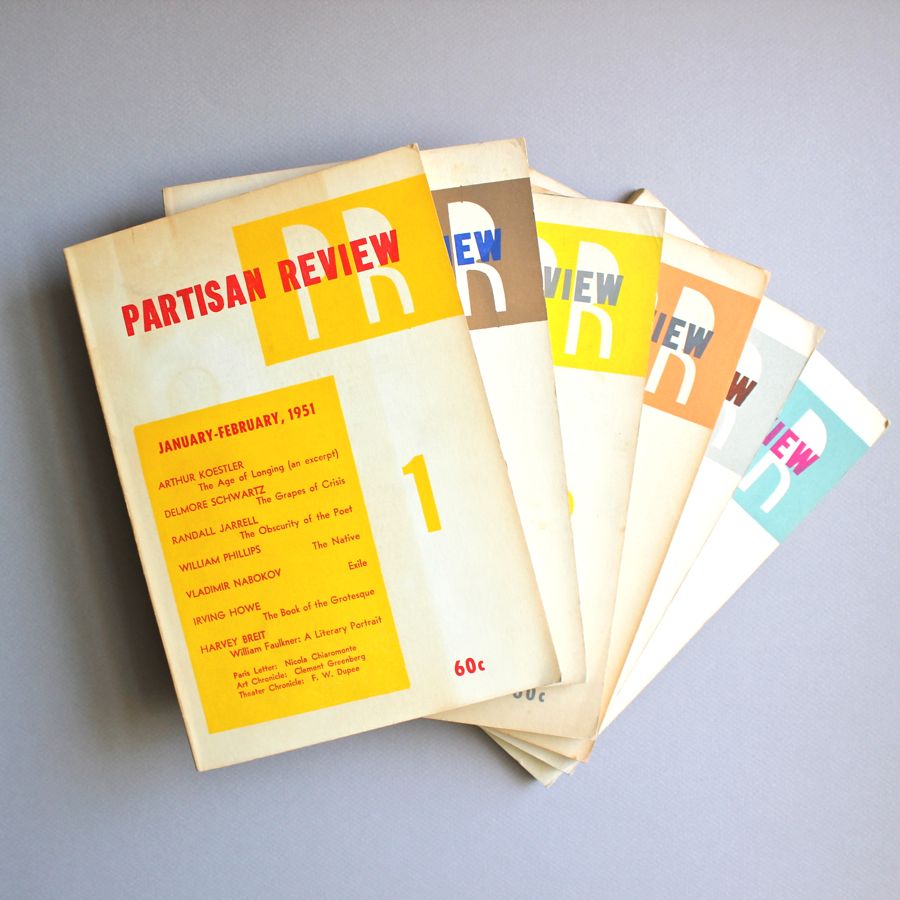 Founded by William Phillips and Philip Rahv in February of 1934, leftist arts and politics magazine Partisan Review came about initially as an alternative to the American Communist Party’s publication, New Masses. While Partisan Review (PR) published many a Marxist writer, its politics diverged sharply from communism with the rise of Stalin. Perhaps this turn ensured the magazine’s almost 70-year run from ’34 to 2003, while New Masses folded in 1948. Partisan Review nonetheless remained a venue for some very heated political conversations (see more on which below), yet it has equally, if not more so, been known as one of the foremost literary journals of the 20th century.

Now you can assess the impact of that punch by accessing all 70-years’ worth of issues online at Boston University’s Howard Gotlieb Archival Research Center. BU began hosting the magazine in 1978 after it moved from Rutgers, where founding editor William Phillips taught. Now the university has finished digitizing the entire collection, in handsome scans of vintage copies that readers can page through like an actual magazine. The collection is searchable, though this function is a little clunky (all links here direct you to the front cover of the issue. You’ll have to navigate to the actual pages yourself.)

In a post on the Gotlieb Center project, Hyperallergic points us toward a few more highlights:

In art, Partisan Review is perhaps best known as the publisher of Clement Greenberg, who contributed over 30 articles from 1939 to 1981, most notably his Summer 1939 essay entitled “Avant-Garde and Kitsch.” (Greenberg even made a posthumous appearance in the Spring 1999 issue.) Beyond Greenberg’s voluble legacy we encounter such landmark texts as Dwight Macdonald’s “Masscult and Midcult,” from the Spring 1960 issue, and Susan Sontag’s “Notes on ‘Camp’” from Winter 1964, as well as the seminal popular-culture criticism of Robert Warshow (his essay on the Krazy Kat comic strip in the November-December 1946 issue is especially great) and the work of Hilton Kramer, the conservative iconoclast who went on to found The New Criterion.

Partisan Review also served as an outlet for George Orwell, who lambasted leftist pacifists—calling them, more or less, fascist sympathizers—in his series of articles between January 1941 and the summer of 1946, which he called “London Letters.” Orwell did not hesitate to name names; he also reported in 1945 of the “most enormous crimes and disasters” committed by the Soviets, including “purges, deportations, massacres, famines, imprisonment without trial, aggressive wars, broken treaties….” These things, Orwell remarked “not only fail to excite the big public, but can actually escape notice altogether.”

Partisan Review, however, was not aimed at “the big public.” Its “rarified principles,” writes Sam Tanenhaus of Slate—who calls PR “Trotskyist” for its interventionist boosterism—“attracted only 15,000 subscribers at its peak.”PR began in the age of the “little magazine,” a “term of honor” for the small journals that nurtured the high culture of their day, and which seem now so antiquated even as beleaguered publishers keep pushing them out to preciously small cliques of devoted readers. But charges of elitism can ring hollow, and given all we have to thank “little magazines” like Partisan Review for, it would probably behoove to pay attention to their successors. Enter the archive here.