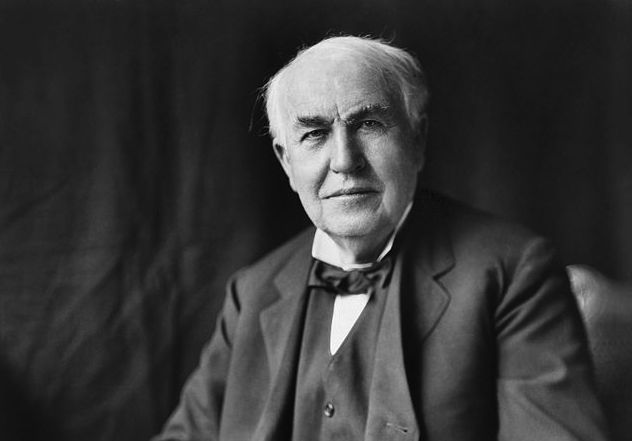 I remember opening my college newspaper one day, and out of it fell what looked like an advertising supplement of unusually utilitarian design. Upon closer inspection, it contained a series of math-y looking problems for the reader to work out and, if they did so, mail in to an address provided. Word soon began to circulate that this unusual leaflet came from no less an institution than Google itself, already well known as a provider of advanced search services but not quite yet as a benevolent provider of dream jobs (an image now satirized in movies like The Internship).

The unusual hiring practices of giant, innovative American technology companies have become the stuff of modern myth, but the usage of seemingly job-unrelated intellectual tests as a filter for potential employees has a much longer history. Thomas Edison, that original giant of American technological innovation, put forward the first famous example: a 146-question test on subjects of general knowledge from geography to history to physics to the price of gold.

“Americans obsessed over the test following [the] publication of many questions in the May 11, 1921 New York Times,” writes Paleofuture’s Matt Novak. “From there the test was debated, copied, and parodied in newspapers and magazines around the country.” If you’d like to get a sense of how you’d have fared in the scramble for a sweet Edison job, set your mind back to the early 1920s and tackle these questions as best you can:

2. What city and country produce the finest china?

3. Where is the River Volga?

4. What is the finest cotton grown?

5. What country consumed the most tea before the war?

6. What city in the United States leads in making laundry machines?

7. What city is the fur centre of the United States?

8. What country is the greatest textile producer?

9. Is Australia greater than Greenland in area?

12. In what country other than Australia are kangaroos found?

13. What telescope is the largest in the world?

14. Who was Bessemer and what did he do?

23. Who was Francis Marion?

25. Where did we get Louisiana from?

28. What war material did Chile export to the Allies during the war?

29. Where does most of the coffee come from?

32. Where was Napoleon born?

33. What is the highest rise of tide on the North American Coast?

35. Who was the Emperor of Mexico when Cortez landed?

36. Where is the Imperial Valley and what is it noted for?

37. What and where is the Sargasso Sea?

38. What is the greatest known depth of the ocean?

39. What is the name of a large inland body of water that has no outlet?

40. What is the capital of Pennsylvania?

42. Rhode Island is the smallest state. What is the next and the next?

44. How far is it from New York to San Francisco?

45. How far is it from New York to Liverpool?

46. Of what state is Helena the capital?

47. Of what state is Tallahassee the capital?

48. What state has the largest copper mines?

49. What state has the largest amethyst mines?

50. What is the name of a famous violin maker?

51. Who invented the modern paper-making machine?

52. Who invented the typesetting machine?

55. What is artificial silk made from?

58. What is celluloid made from?

60. To what is the change of the seasons due?

62. From what part of the North Atlantic do we get codfish?

63. Who reached the South Pole?

65. Where is the Magdalena Bay?

68. Where do we get our domestic sardines?

69. What is the longest railroad in the world?

73. Who was Cleopatra and how did she die?

74. Where are condors found?

75, Who discovered the law of gravitation?

76. What is the distance between the earth and sun?

78. What country produces the most wool?

80. What cereal is used in all parts of the world?

88. What part of Germany do toys come from?

91. What is the capital of Alabama?

94. Where is platinum found?

95. With what metal is platinum associated when found?

96. How is sulphuric acid made?

98. Who discovered how to vulcanize rubber?

99. Where do we import rubber from?

103. What is the difference between anthracite and bituminous coal?

108. What country makes the best optical lenses and what city?

109. What kind of a machine is used to cut the facets of diamonds?

113. What star is it that has been recently measured and found to be of enormous size?

114. What large river in the United States flows from south to north?

115. What are the Straits of Messina?

116. What is the highest mountain in the world?

127. What place is the greatest distance below sea level?

130. Why is a Fahrenheit thermometer called Fahrenheit?

131. Who owned and ran the New York Herald for a long time?

134. Who discovered the Pacific Ocean?

135. What country has the largest output of nickel in the world?

136. What ingredients are in the best white paint?

138. In what part of the world does it never rain?

139. What was the approximate population of England, France, Germany and Russia before the war?

141. Where do we get quicksilver from?

142. Of what are violin strings made?

143. What city on the Atlantic seaboard is the greatest pottery centre?

144. Who is called the “father of railroads” in the United States?

Some of these questions, like those on the location of Copenhagen or the identity of Leonidas (you need think back only to 300), have grown easier with time. Some — “What is coke?” “What is vulcanite and how is it made?” — have grown harder. Others will require you to call upon not current knowledge, but period knowledge: sure, you know the number of states in the union now, but how about in 1921? And sure, you know which city is the fur center of the United States now, but how about in 1921?

Once you’ve made your guesses, you can check your answers over at Paleofuture. Edison’s test will almost certainly frustrate you — and if it doesn’t, you may have a career waiting not at Google, but on Jeopardy! — and it may even fill you with gratitude that we live in an age where hot employers check for raw brainpower, not the ability to memorize a seemingly random assortment of facts. But the test itself, like several of its questions, pulls a bit of a trick. The tremendous amount of attention it received when the public caught a glimpse of it reveals Edison’s mastery of the highest American force: publicity.

Note: Thanks to one of our readers, you can see how Edison defended the test in the pages of The New York Times.