How Marcel Marceau Started Miming to Save Children from the Holocaust 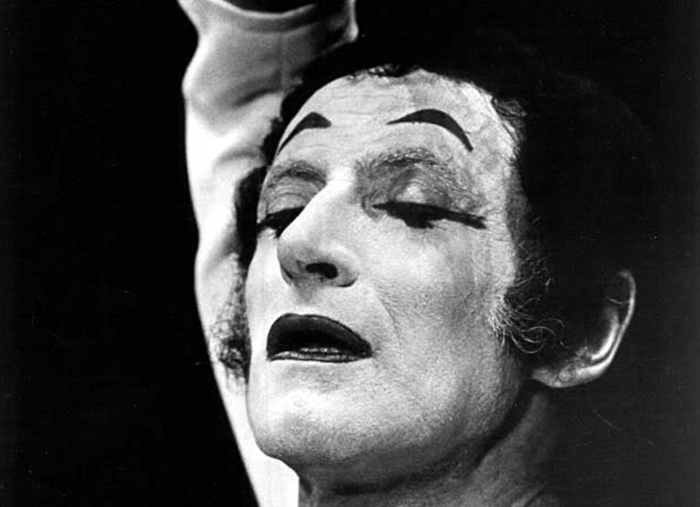 If we think about the times evil has most notably reared its head, many of our minds go right to the Holocaust — as, no doubt, did Marcel Marceau’s, especially since he had first-hand experience with the horror of the Nazis, having lost his father in Auschwitz, and even used the art of mime against it.

The Jewish Marceau (née Mangel) got his first exposure to mime from a Charlie Chaplin film, which he saw at the age of five. Later, when France entered the Second World War, he and his family moved around the country to flee the Nazis, from whom it became increasingly difficult to hide as time went on. “I was hidden by my cousin Georges Loinger who was a heroic Resistance fighter,” Marceau recounted in a 2001 speech. “He said, ‘Marcel must hide for a while. He will play an important part in the theater after the war.’ How did he know that? Because he knew that when I was a child I created a theater for children already.”

The skills Marceau cultivated performing for other children came in more than handy not just after the war but during it, as he performed for youngsters on the run from Hitler. ”Marceau started miming to keep children quiet as they were escaping,” said documentarian Philippe Mora, son of the Resistance fighter who smuggled refugees alongside Marceau. “It had nothing to do with show business. He was miming for his life.”

“Paris was liberated after the Americans entered in August,” said Marceau, “but the war wasn’t finished. Two months before the liberation of France, I entered a famous theater school and a master of mime, Étienne Decroux, said to the young students, ‘Who wants a part?’ And I said I. And I mimed the killer. And the killer was a Nazi, but of course I didn’t say Nazi.” Impressed with his impromptu embodiment of evil, Decroux asked his name. “I said Marcel Marceau,” his new surname inspired by a general who fought in the French Revolution, the “Marceau on the Rhine” of Victor Hugo’s poem (“and I was born in Strasbourg on the Rhine,” the artist adds). “That’s a beautiful name,” said Decroux. And thus the career of a mime legend truly began.

Marcel Marceau Mimes the Progression of Human Life, From Birth to Death, in 4 Minutes

How Alice Herz-Sommer, the Oldest Holocaust Survivor, Survived the Horrific Ordeal with Music

Memory of the Camps (1985): The Holocaust Documentary that Traumatized Alfred Hitchcock, and Remained Unseen for 40 Years