The Power of Power Naps: Salvador Dali Teaches You How Micro-Naps Can Give You Creative Inspiration 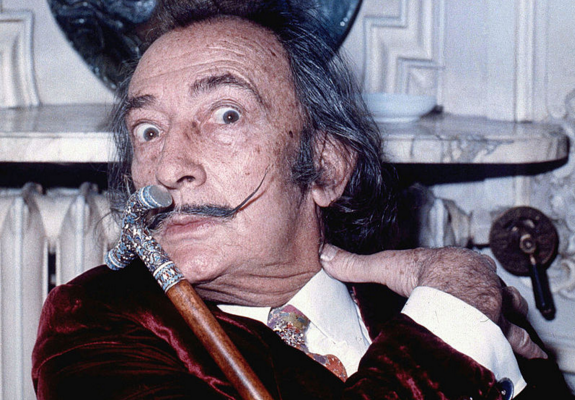 In high school, I had a history teacher who was, in his spare time, a millionaire owner of several marinas. He taught, he told us, because he loved it. Was he a good teacher? Not by the lights of most pedagogical standards, but he did intend, amidst all his lassitude and total lack of organization, to leave us all with something more important than history: the secret of his success. What was it, you ask? Naps. Each day he touted the power of power naps with a proselytizer’s relentless enthusiasm: 15 minutes a few times a day, the key to wealth and happiness.

We all thought he was benignly nuts, but maybe he was on to something after all. It seems that many very wise, productive people—such as Albert Einstein, Aristotle, and Salvador Dali—have used power naps as sources of refreshment and inspiration. Except that while my history teacher recommended no less than ten minutes, at least one of these famous gents preferred less than one. Dali used a method of timing his naps that ensured his sleep would not last long. He outlined it thus, according to Lifehacker:

2. Hold a key in your hand, between your fingers (for the bohemian, use a skeleton key)

3. Relax and fall asleep (but not for too long…)

Dali called it, fittingly, “Slumber with a key,” and to “accomplish this micro nap,” writes The Art of Manliness, he “placed an upside-down plate on the floor directly below the key.” As soon as he fell asleep, “the key would slip through his fingers, clang the plate, and awaken him from his nascent slumber.” He claimed to have learned this trick from Capuchin monks and recommended it to anyone who worked with ideas, claiming that the micro nap “revivified” the “physical and psychic being.”

Dali included “Slumber with a key” in his book for aspiring painters, 50 Secrets of Magic Craftsmanship, along with such nostrums as “the secret of the reason why a great draughtsman should draw while completely naked” and “the secret of the periods of carnal abstinence and indulgence to be observed by the painter.” We might be inclined to dismiss his nap technique as a surrealist practical joke. Yet The Art of Manliness goes on to explain the creative potential in the kind of nap I used to take in history class—dozing off, then jerking awake just before my head hit the desk:

The experience of this transitional state between wakefulness and sleep is called hypnagogia. You’re floating at the very threshold of consciousness; your mind is sliding into slumber, but still has threads of awareness dangling in the world…. While you’re in this state, you may see visions and hallucinations (often of shapes, patterns, and symbolic imagery), hear noises (including your own name or imagined speech), and feel almost physical sensations…. The experience can essentially be described as “dreaming while awake.”

The benefits for a surrealist painter—or any creative person in need of a jolt out of the ordinary—seem obvious. Many visionaries such as William Blake, John Keats, and Samuel Taylor Coleridge have made use of waking dream states as wellsprings of inspiration. Both Beethoven and Wagner composed while half asleep.

Scientists have found waking dream states useful as well. We’ve already mentioned Einstein. Brilliant mathematician, engineer, philosopher, and theoretical physicist Henri Poincare also found inspiration in micro naps. He pointed out that the important thing is to make ready use of any insights you glean during your few seconds of sleep by writing them down immediately (have pen and paper ready). Then, the conscious mind must take over: “It is necessary,” wrote Poincare, “to put in shape the results of this inspiration, to deduce from them the immediate consequences, to arrange them,” and so forth. He also suggests that “verification” of one’s hypnagogic insights is needed above all, but this step, while critical for the mathematician, seems superfluous for the artist.

So the micro nap comes to us with a very respectable pedigree, but does it really work or is it a psychological placebo? The author of the Almost Bohemian blog writes that he has practiced the technique for several weeks and found it “relatively successful” in restoring energy, though he has yet to harness it for inspiration. If you asked empirical sleep researchers, they might tend to agree with my history teacher: “Sleep laboratory studies show,” writes Lynne Lamberg in her book Bodyrhythms, “that a nap must last at least ten minutes to affect mood and performance.” This says nothing at all, however, about how long it takes to open a doorway to the unconscious and steal a bit of a dream to put to use in one’s waking work.

Aside from the very specific use of the micro nap, the longer power nap—anywhere from 10-40 minutes—can work wonders in improving “mood, alertness and performance,” writes the National Sleep Foundation. Short naps seem to work best as they leave one feeling refreshed but not groggy, and do not interfere with your regular sleep cycle. The Sleep Foundation cites a NASA study “on sleepy military pilots and astronauts” which found that “a 40-minute nap improved performance by 34% and alertness by 100%.” Lifehacker points to studies showing that “power naps, short 10 to 15 minute naps, improve mental efficiency and productivity,” which is why companies like Google and Apple allow their employees to doze off for a bit when drowsy.

One stress management site observes that the 10-15 minute power nap does not even require a pillow or blanket; “you don’t even need to go to sleep! You just need a comfortable place to lie on your back, put your feet up, and breathe comfortably.” Such a practice will not likely turn you into a world famous artist, poet, or scientist (or millionaire marina-owning, altruistic high school teacher). It will likely rejuvenate your mind and body so that you can make much better use of the time you spend not sleeping.

via The Art of Manliness