I’ve long counted myself as a fan of Edward Tufte, the preeminent living expert on the visual display of quantitative information. I like to think this puts me in the company of Florence Nightingale, founder of modern nursing as well as a prolific writer and still today a household name. Having lived in the Victorian era, she of course never got to enjoy the work of Tufte himself, though her own zeal for data and statistics, in a time that valued such things less than ours, made her, in some sense, a Tufte of her day: the first female member of the Royal Statistical Society and an honorary member of the American Statistical Association. The video above, an outtake from Hans Rosling’s The Joy of Stats, offers a brief introduction to the statistical side of Nightingale’s career, and the important role data visualization played in her mission to save lives.

“When Florence Nightingale arrived at a British hospital in Turkey during the Crimean War, she found a nightmare of misery and chaos,” writes Science News‘ Julie Rehmeyer. “By the time Nightingale left Turkey after the war ended in July 1856, the hospitals were well-run and efficient, with mortality rates no greater than civilian hospitals in England.”

But feeling great regret over all the lives lost there to preventable disease, she went on to save even more of them by bringing numbers into play. She specifically compiled “vast tables of statistics about how many people had died, where and why. Many of her findings shocked her. For example, she discovered that in peacetime, soldiers in England died at twice the rate of civilians — even though they were young men in their primes.” 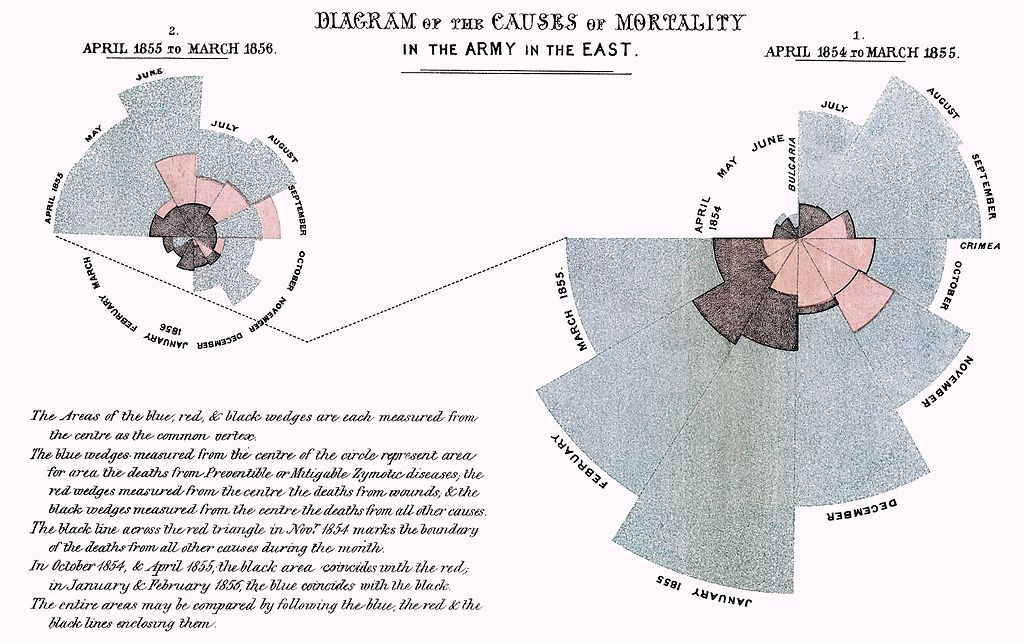 Nightingale’s most influential presentation of her data, which she called a “coxcomb,” appears just above. This Is Statistics describes “Diagram of the Causes of Mortality in the Army in the East” as “similar to a pie chart, but more intricate. In a pie chart the size of the ‘slices’ represent a proportion of data, while in a coxcomb the length, which the slice extends radially from the center-point, represents the first layer of data.” Her famous chart “was divided evenly into 12 slices representing months of the year, with the shaded area of each month’s slice proportional to the death rate that month. Her color-coded shading indicated the cause of death in each area of the diagram.” She stated the goal of her visualization clearly: “to affect thro’ the Eyes what we fail to convey to the public through their word-proof ears.”

We all try to do the very same thing when we present information today, though few of us—even armed with a degree of number-crunching and graphic design powers that would have seemed magical to Nightingale and her contemporaries—achieve the kind of results she did. She galvanized systemic change in hospital design and operation as well as prompted a revolution in sanitation which increased Britain’s average national life expectancy by 20 years—something to bear in mind when we start to get big ideas about how our Powerpoint slide shows will change the world.

In Under Three Minutes, Hans Rosling Visualizes the Incredible Progress of the “Developing World”

Statistics Explained Through Modern Dance: A New Way of Teaching a Tough Subject