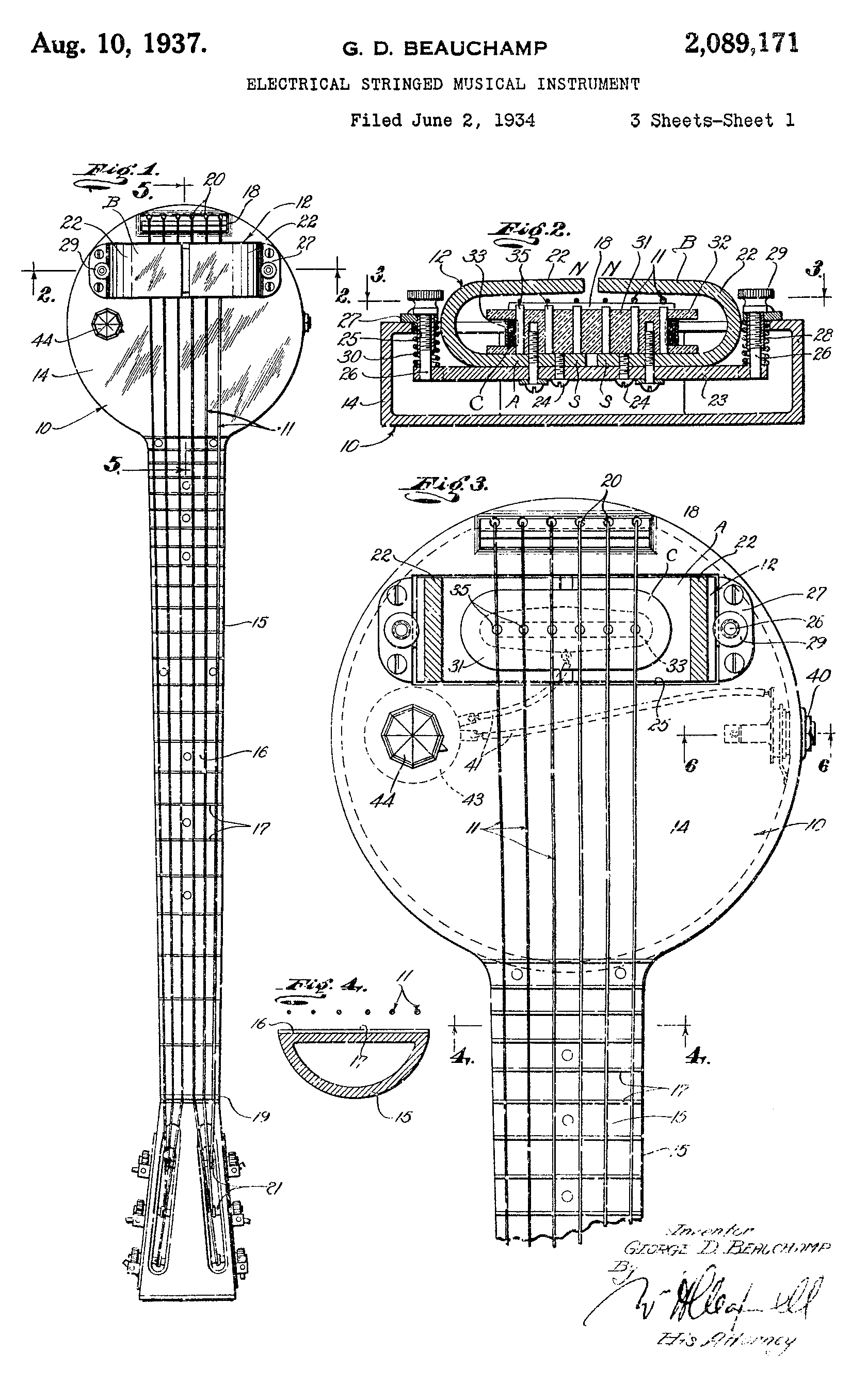 The names Leo Fender and Les Paul will be forever associated with the explosion of the electric guitar into popular culture. And rightly so. Without engineer Fender and musician and studio wiz Paul’s timeless designs, it’s hard to imagine what the most iconic instruments of decades of popular music would look like.

Though Fender and Paul (and the Gibson company) get all the glory, it’s two men named George who should rightly get much of the credit for inventing the electric guitar. The first, naval officer George Breed, has a status vis-à-vis the electric guitar similar to Leonardo da Vinci’s to the helicopter.

In 1890, Breed submitted a patent for a one-of-a-kind design, utilizing the two basic elements that would eventually make their way into Stratocasters and Les Pauls—a magnetic pickup and wire strings. Unfortunately for Breed, his design also included some very impractical circuitry and required battery operation, “resulting in a small but extremely heavy guitar with an unconventional playing technique,” writes the International Repertory of Music Literature, “that produced an exceptionally unusual and unguitarlike, continuously sustained sound.”

Like a Renaissance flying machine, the design went nowhere. That is, until George Beauchamp, a “musician and tinkerer” from Texas, came up with a design for an electric guitar pickup that worked beautifully. The first “Frying Pan Hawaiian” lap steel guitar, whose schematic you can see at the top of the post, “now sits in a case in a museum,” writes Andre Millard in his history of the electric guitar, “looking every inch the historic artifact but not much like a guitar.” Gizmodo quotes guitar historian Richard Smith, who discusses the need in the 20s and 30s for an electric guitar to be heard over the rhythm instruments in jazz and in Beauchamp’s preferred style, Hawaiian music, “where… the guitar was the melody instrument. So the real push to make the guitar electric came from the Hawaiian musicians.”

Beauchamp developed the guitar after he was fired as general manager of the National Instrument Manufacture Company. Needing a new project, he and another National employee, Paul Barth, began experimenting with Breed’s ideas. After building a working pickup, they called on another National employee, writes Rickenbacker.com, “to make a wooden neck and body for it. In several hours, carving with small hand tools, a rasp, and a file, the first fully electric guitar took form.” (An earlier electro-acoustic guitar—the Stromberg Electro—contributed to amplifier technology but its awkward pickup design didn’t catch on.)

Needing capital, manufacturing, and distribution, Beauchamp contracted with toolmaker Adolph Rickenbacker, who mass produced the Frying Pan as “The Rickenbacher A-22″ under the company name “Electro String.” (The company became Rickenbacker Guitars after its owner sold it in the 50s.) Although the novelty of the instrument and its cost during the Great Depression inhibited sales, Beauchamp and Rickenbacker still produced several versions of the Frying Pan, with cast aluminum bodies rather than wood. (See an early model here.) Soon, the Frying Pan became integrated into live jazz bands (see it at the 3:34 mark above in a 1936 Adoph Zukor short film) and recordings.

How does the Frying Pan sound? Astonishingly good, as you can hear for yourself in the demonstration videos above. Although Rickenbacker and other guitar makers moved on to installing pickups in so-called “Spanish” guitars—hollow-bodied jazz boxes with their familiar f-holes—the Frying Pan lap steel continues to have a particular mystique in guitar history, and was manufactured and sold into the early 1950s.

Learn More about the invention of the electric guitar in the short Smithsonian video just above.

The Story of the Guitar: The Complete Three-Part Documentary