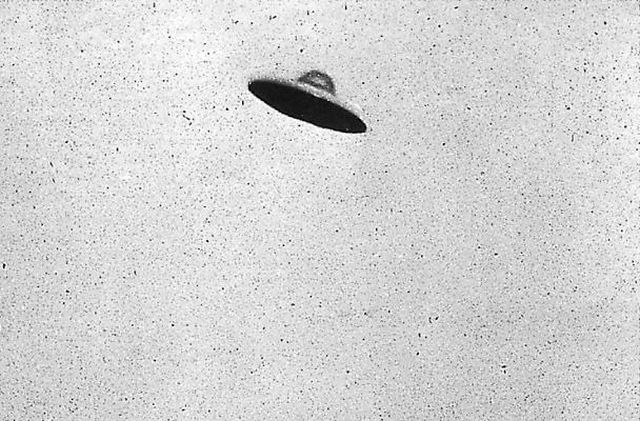 Let down by the X-Files reboot? Maybe you never really dug the whole alien conspiracy thing with the bees and the black sludge in the first place. Maybe you didn’t need another convoluted, inscrutable, bonkers plotline. Maybe you wanted the truth. It’s out there. The CIA might know where it is.

In 1978, the agency known in some circles for masterminding nearly every world event since its inception declassified a vast number of files, “hundreds of documents… detailing the Agency’s investigations into Unidentified Flying Objects (UFOS). The documents date primarily from the late 1940s and 1950s.”

And since this past January the public has had full and open access to all of those documents on the internet. To celebrate the seriousness of this archive’s widespread availability, the Agency made two lists of five different documents each, to “highlight a few documents both skeptics and believers will find interesting.”

Who do you think they picked for their model skeptic and believer? “The truth is out there,” as the CIA is apparently fond of saying, “click on the links to find it.”

The Mulder and Scully lists serve as lighthearted introductions to the sometimes bewildering array of documents in the CIA’s Freedom of Information Act (FOIA) Electronic Reading Room, which hosts those several hundred reports, memos, etc., sometimes redacted or written in Agency code.

Then, of course, there’s this precious eyewitness testimony, from Mulder’s list, taken from a man in East Germany in 1952:

Now, the side of the object on which the holes had been opened began to glitter. Its color seemed green but later turned to red. At the same time I began to hear a slight hum. While the brightness and hum increased, the conical tower began to slide down into the center of the object. The whole object then began to rise slowly from the ground and rotate like a top.

If you’re seeing a description from a classic sci-fi radio drama or pulp magazine, read on. The craft becomes “surrounded by a ring of flames,” rises, and flies away. And, of course, the man had earlier witnessed men “dressed in some shiny metallic clothing.” It all sounds very silly except that many other unrelated people in the small town reported seeing something very strange in the sky that night. One witnesses’ overactive imagination does not invalidate the testimony of the others.

We’ve had many sightings of UFOs from astronauts and pilots in the last few decades (mostly debunked), and ordinary people on the ground have never stopped seeing lights in the sky. So we might wonder why all of the CIA documents on the site come from the 1960s and before? Is this a sign of increased activity in the years after the supposed Roswell event? Perhaps the alien conspiracy’s feverish, devious start?

Or, as GeekWire writes, was the CIA “worried about the potential threat that UFOs posed to national security… they assumed that the UFOs might be part of a Soviet weapons test program.” With the gradual warming of relations, then glasnost, the spies lost interest… (Or…?) … but we might wonder why the Agency used the new X-Files debut to draw attention to itself. Your conspiracy theory is probably as good as any other.

If CIA did stop investigating alien invasions, you don’t have to. The Agency has left it in your capable hands, publishing “10 Tips When Investigating a Flying Saucer” to guide you in your quest for the truth. Be warned: it’s a very skeptic-friendly set of guidelines; one that—were everyone to follow it—might virtually eliminate every reported UFO sighting. Curious that. What are they hiding?

Find the list below, and see the complete explanation of each tip (such times we live in) at the CIA’s website.

Again, to dig deeper into the CIA’s fascinating archive of UFO sightings, visit its FOIA UFO collection. True believers may want to know more, and they can, if they’re willing to follow the Byzantine research instructions on the UFO collection’s main page to find an Agency article about the “CIA’s Role in the Study of UFOs, 1947-1990.” Or they could just click here.