1950 Superman Poster Urged Kids to Defend All Americans, Regardless of Their Race, Religion or National Origin 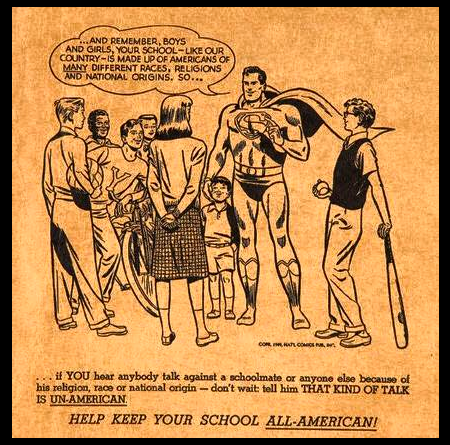 It makes sense that Superman would take a tolerant view of immigrants and other minorities, given that he himself arrived on Earth as a refugee from the planet Krypton.

The Man of Steel may strike you as an unlikely mouthpiece for progressive ideals, but 1950 found him on a book cover, above, engaged in conversation with a small crowd of mostly white boys:

“…and remember, boys and girls, your school – like our country – is made up of Americans of many different races, religions and national origins, so … If YOU hear anybody talk against a schoolmate or anyone else because of his religion, race or national origin – don’t wait: tell him THAT KIND OF TALK IS UN-AMERICAN. HELP KEEP YOUR SCHOOL ALL-AMERICAN!”

In other words, citizens must steel themselves to take action, because you can’t always count on a superhero to show up and make things right.

The cheap paper jacket, above, was distributed to school children by the Institute For American Democracy, an offshoot of the New York-based Anti-Defamation League.

(Perhaps President Elect was too young to receive a copy. The back of the cover includes a grid for filling in one’s class schedule and he was but four years old at the time.)

Superman could not survive Doomsday, but the Anti-Defamation League, planet Krptyon to the illustration’s original distributer, continues to uphold the values he promotes above.

Jonathan Green­blatt, the ADL’s CEO issued a post-Election statement that reads in part:

Already there have been troubling signs of a spike in hate crimes in the days after the election. As we look ahead, ADL will be vigilant against extremism and relentlessly hold the new administration accountable. You can expect ADL to be unwavering in its commitment to fighting anti-Semitism, racism and bigotry.  We will monitor developments and speak out.

And wherever and whenever Jews, minority groups, immigrants, and others are marginalized or our civil liberties are threatened, ADL vigorously will defend those rights … We will not shrink from the fight ahead regardless of where it takes us.

In addition to maintaining a database of hate symbols and a form where citizens can report Anti-Semitic, racist, or bigoted encounters, the ADL has a robust list of educational resources for parents, teachers and youth.

Meanwhile, a full color version of the 66-year-old illustration has been making the rounds on social media. Let us consider it a placeholder. Eventually someone will surely take it back to the drawing board to add more girls, children with disabilities, and children of color. 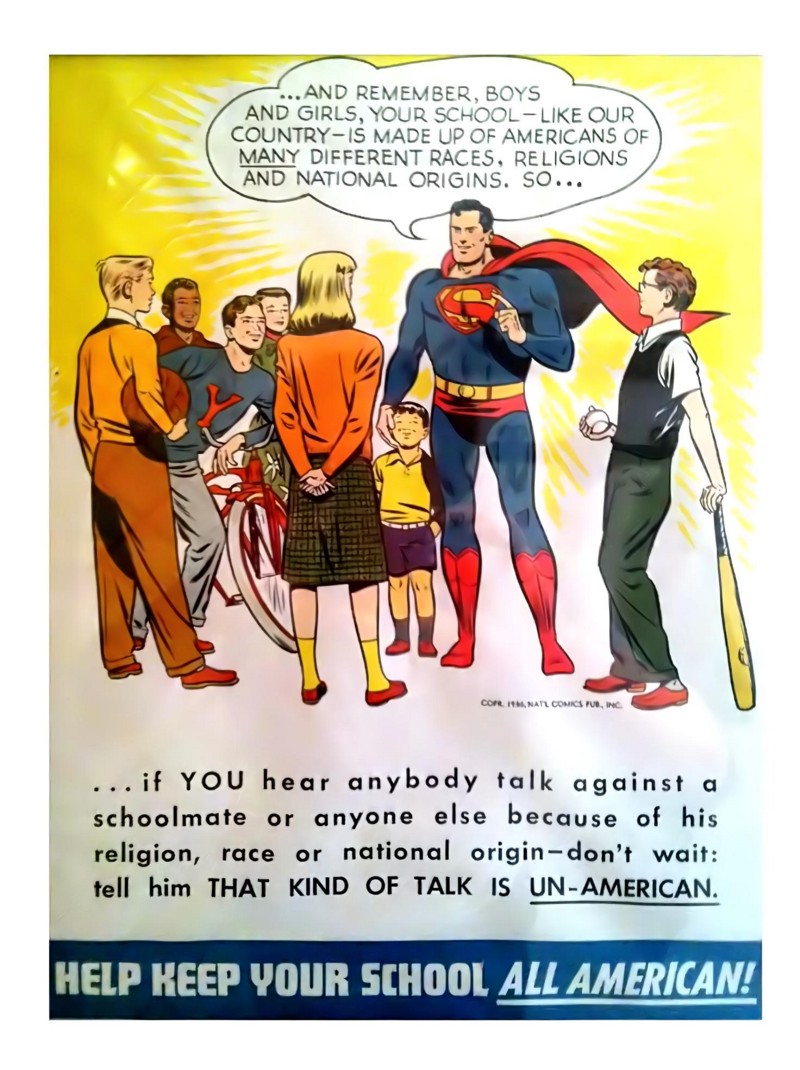