From Newton’s mechanical calculations to Einstein’s general and special relativity to the baffling indeterminacy of quantum mechanics, the discipline of physics has become increasingly arcane and complex, and less and less governed by orderly laws. This presents a problem for the layperson, who struggles to understand how Newtonian physics, with its predictable observations of physical forces, relates to the parallax and paradox of later discoveries. “If you don’t already know physics,” says physicist Dominic Walliman in the video above, it’s difficult sometimes to see how all of these different subjects are related to each other.” So Walliman has provided a helpful visual aid: an animated video map showing the connections between classical physics, quantum physics, and relativity.

Newton’s laws of motion and gravitation and his invention of calculus best represent the first domain. Here we see the inseparable relationship between physics and math, “the bedrock that the world of physics is built from.” When we come to one of Newton’s less well-known pursuits, optics, we see how his interest in light waves anticipated James Clerk Maxwell’s work on electromagnetic fields. After this initial connection, the proliferation of subdisciplines intensifies: fluid mechanics, chaos theory, thermodynamics… the guiding force of them all is the study of energy in various states. The heuristics of classical physics prevailed, and worked perfectly well, until about 1900, when the clockwork universe of Newtonian mechanics exploded with new problems, both at very large and very small levels of description.

It is here that physics branches into relativity and quantum mechanics, which Walliman explains in brief. While we are likely familiar with the very basics of Einstein’s relativity, quantum physics tends to get a little less coverage in the typical course of a general education, due to its complexity, perhaps, as well as the fact that at their edges, quantum explanations fail. While quantum field theory, says Walliman, is “the best description of the universe we have,” once we come to quantum gravitation, we reach “the giant Chasm of Ignorance” that speculative and controversial ideas like string theory and loop quantum gravity attempt to bridge. 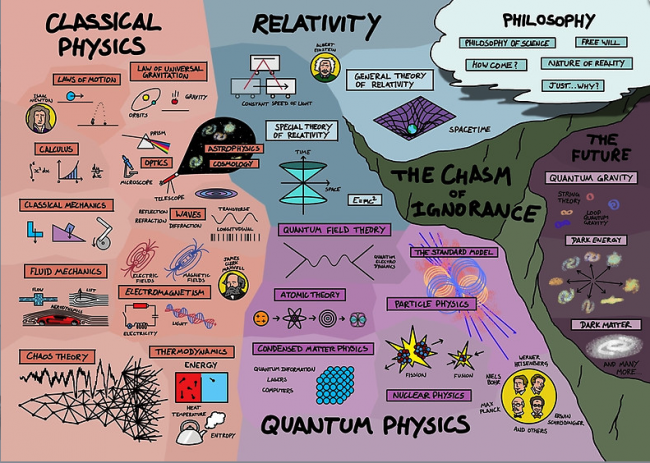 At the “Chasm of Ignorance,” our journey through the domains of physics ends, and we end up back in the airy realm where it all began, philosophy. Those of us with a typical general education in the sciences may find that we have a much better understanding of the field’s intellectual geography. As a handy reminder, you might even wish to purchase a poster copy of Walliman’s Map of Physics, which you can see en miniature above. (It’s also available as a digital download here.) Just below, the charming, laid-back physicist takes the stage in a TEDx talk to demonstrate effective science communication, explaining “quantum physics for 7 year olds,” or, as it were, 37, 57, or 77-year olds. To learn more about physics, please don’t miss these essential resources in our archive: Free Online Physics Courses and Free Physics Textbooks