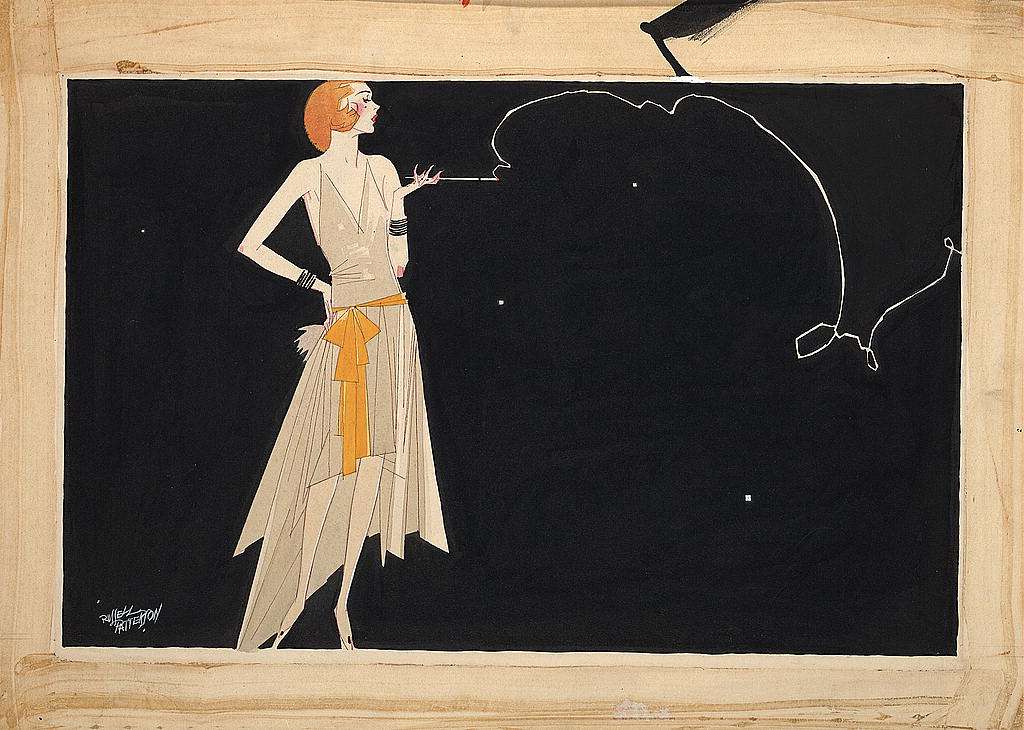 Historically speaking, what we call cartoons began as artifacts of print culture, and as such, of modernity. Before the widespread availability of printed texts, the word “cartoon” referred to a sketch, an artist’s mock-up of a greater work. The word literally meant “a very large sheet of paper,” since Renaissance cartones “were the same size as the intended painting and were created to transfer the image,” as one art historian notes (with some very elegant examples). So when and how did the cartoon become shorthand for illustrated comic editorials?

Not until the late 18th century, though the origins of the form are often traced to another Italian art, the caricatura, satirical doodles favored by such masters as Leonardo da Vinci and Gian Lorenzo Bernini.

These, writes the Cartoon Museum, “were technical exercises in virtuosity with the daring aim of defining the essence of a person in a few deft strokes of the pen.” Like the work of boardwalk caricaturists, we associate the contemporary cartoon with deft essentializing, but rarely with high art. 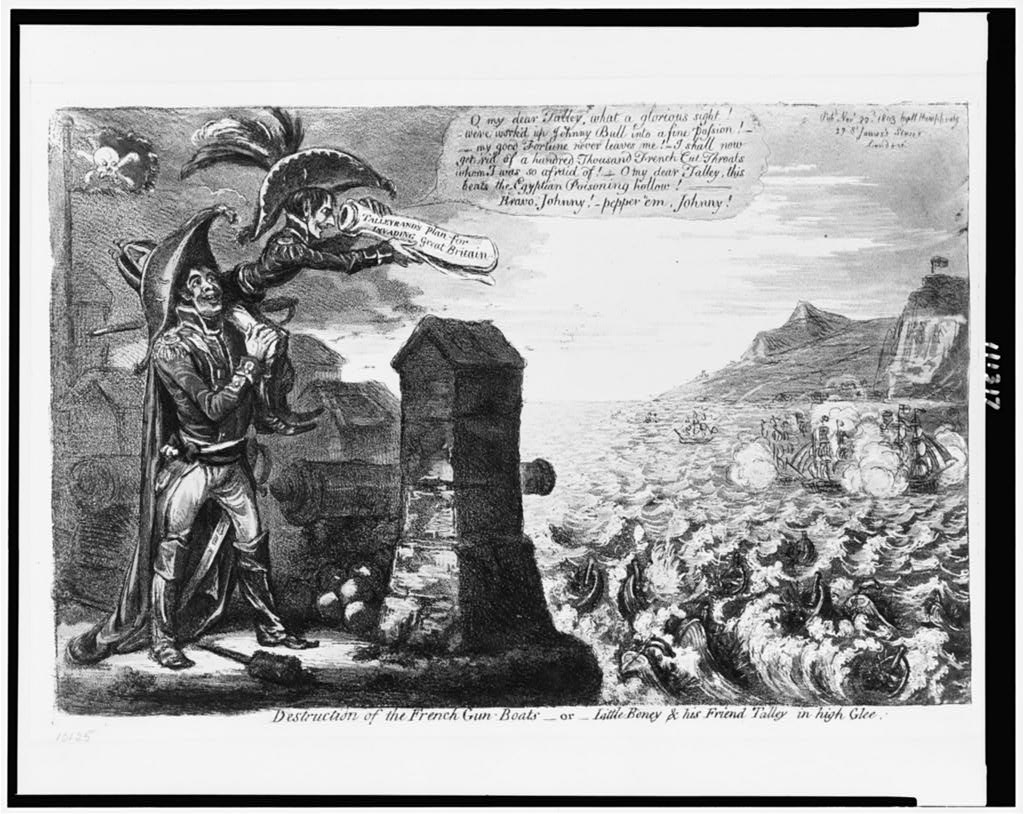 Yet when cartoons as we know them began proliferating, illustrators produced very high-quality work. Many, like English engraver William Hogarth—“regarded as the father of British caricature… and of the comic strip”—are well-known as fine artists. Others, like James Gillray, the most influential cartoonist of the period next to Hogarth, combined fine draughtsmanship with the Italian love of exaggeration and the use of word bubbles. Gillray, who freely satirized figures like George III and Napoleon (above)—is one of many prominent cartoonists represented in the Library of Congress’s digital collections of vintage cartoons, which, taken together, is comprised of about 24,000 images. 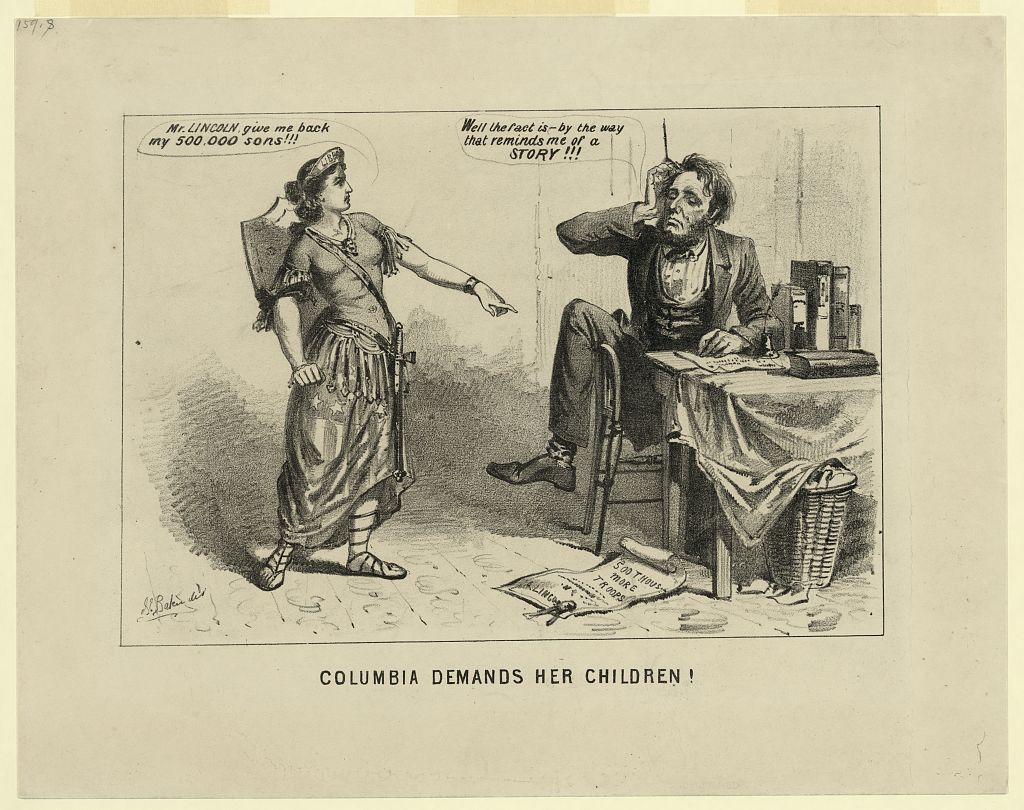 The work of Gillray, George Cruikshank, and other famous cartoon artists of the “golden Georgian age” (1770-1820) appears in a British Collection that showcases “approximately 9,000 prints” highlighting “British political life, society, fashion, manners, and theater.” Most of the Library’s American Collection begins when the Georgian period ends, around 1830, when U.S. illustrators participated in furious debates over slavery, the expanding nation’s colonial wars and, of course, the Civil War. In the 1864 cartoon above, “Columbia, wearing a liberty cap and a skirt made of an American flag, demands, ‘Mr. Lincoln, give me back my 500,000 sons,’” to which the caricature of Lincoln responds with a visual and rhetorical shrug.

The Swann Collection of Caricature and Cartoon takes us well into the 20th century with 2,085 “drawings, prints, and paintings related to the art of caricature, cartoon, and illustration, spanning the years 1780 to 1977” and encompassing magazine illustrations like Russell Patterson’s “Where there’s smoke there’s fire” at the top, and political cartoons, comic book art, and comic strips like the four-frame Batman comic above from 1966. A larger collection of Cartoon Drawings collects “9,000 original drawings for editorial cartoons, caricatures, and comic strips spanning the late 1700s to the present.”

Finally, the Herblock Collection contains “the bulk of the 14,000 original ink and graphite drawings… from 1946 through 2001, when Herblock [Herbert L. Block] worked for the Washington Post,” as well as 1,300 images from his days at the Chicago Daily News. (See a slideshow here of selected cartoons throughout the artist’s career.) Many of the issues in these drawings now seem forgotten or obscure. Some, like his Nixon cartoons, are newly relevant to our times. As we look through these archives, that phenomenon repeats itself over the course of two-hundred years of cartooning. Fashions and tastes may change, but some of the tangled circumstances of British and American politics have remained remarkably consistent.

How Animated Cartoons Are Made: A Vintage Primer Filmed Way Back in 1919