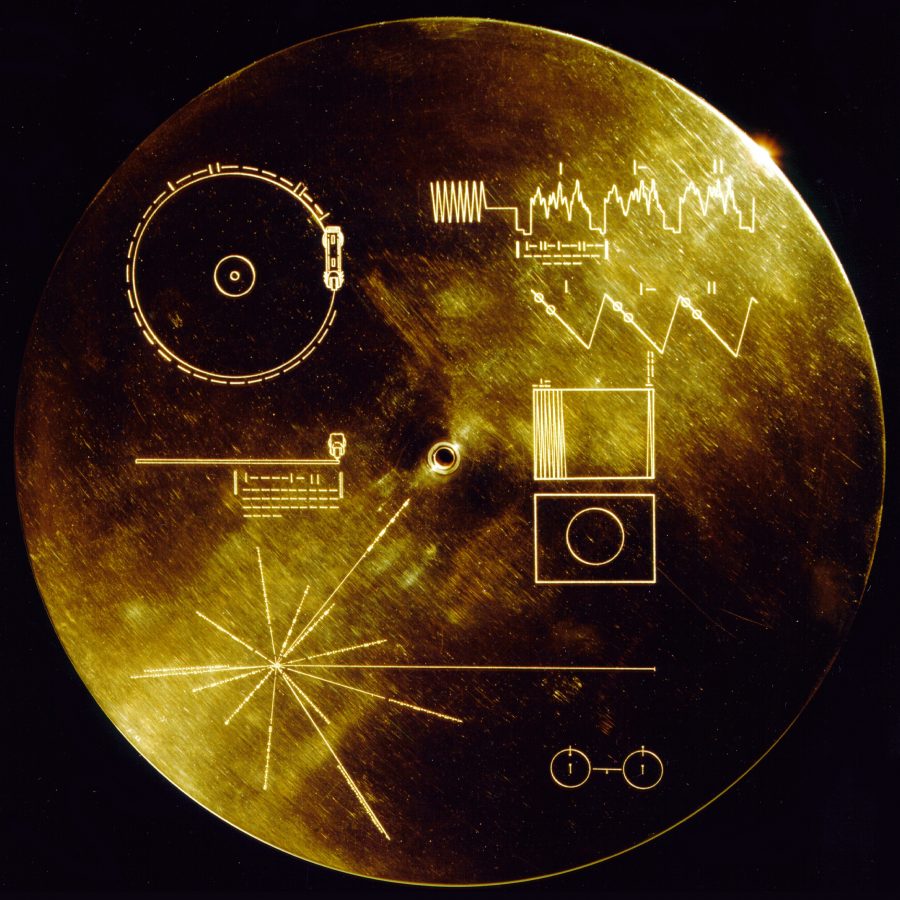 A popular thought experiment asks us to imagine an advanced alien species arriving on Earth, not in an H.G. Wells-style invasion, but as advanced, bemused, and benevolent observers. “Wouldn’t they be appalled,” we wonder, “shocked, confused at how backward we are?” It’s a purely rhetorical device—the secular equivalent of taking a “god’s eye view” of human folly. Few people seriously entertain the possibility in polite company. Unless they work at NASA or the SETI program.

In 1977, upon the launching of Voyager 1 and Voyager 2, a committee working under Carl Sagan produced the so-called “Golden Records,” actual phonographic LPs made of copper containing “a collection of sounds and images,” writes Joss Fong at Vox, “that will probably outlast all human artifacts on Earth.” While they weren’t preparing for a visitation on Earth, they did—relying not on wishful thinking but on the controversial Drake Equation—fully expect that other technological civilizations might well exist in the cosmos, and assumed a likelihood we might encounter one, at least via remote.

Sagan tasked himself with compiling what he called a “bottle” in “the cosmic ocean,” and something of a time capsule of humanity. Over a year’s time, Sagan and his team collected 116 images and diagrams, natural sounds, spoken greetings in 55 languages, printed messages, and musical selections from around the world–things that would communicate to aliens what our human civilization is essentially all about. The images were encoded onto the records in black and white (you can see them all in the Vox video above in color). The audio, which you can play in its entirety below, was etched into the surface of the record. On the cover were etched a series of pictographic instructions for how to play and decode its contents. (Scroll over the interactive image at the top to see each symbol explained.)

Fong outlines those contents, writing, “any aliens who come across the Golden Record are in for a treat.” That is, if they are able to make sense of it and don’t find us horribly backward. Among the audio selections are greetings from then-UN Secretary General Kurt Waldheim, whale songs, Bach’s Brandenberg Concerto No. 2 in F, Senegalese percussion, Aborigine songs, Peruvian panpipes and drums, Navajo chant, Blind Willie Johnson’s “Dark Was the Night” (playing in the Vox video), more Bach, Beethoven, and “Johnny B. Goode.” Challenged over including “adolescent” rock and roll, Sagan replied, “there are a lot of adolescents on the planet.” The Beatles reportedly wanted to contribute “Here Comes the Sun,” but their record company wouldn’t allow it, presumably fearing copyright infringement from aliens.

Also contained in the spacefaring archive is a message from then-president Jimmy Carter, who writes optimistically, “We are a community of 240 million human beings among the more than 4 billion who inhabit planet Earth. We human beings are still divided into nation states, but these states are rapidly becoming a single global civilization.” The messages on Voyagers 1 and 2, Carter forecasts, are “likely to survive a billion years into our future, when our civilization is profoundly altered and the surface of the Earth may be vastly changed.” The team chose not to include images of war and human cruelty. 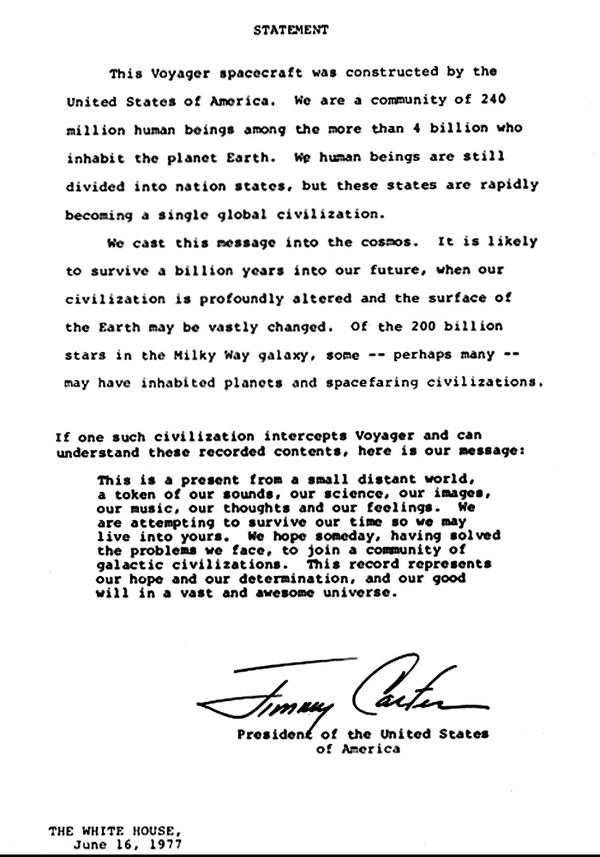 We only have a few years left to find out whether either Voyager will encounter other beings. “Incredibly,” writes Fong, the probes “are still communicating with Earth—they aren’t expected to lose power until the 2020s.” It seems even more incredible, forty years later, when we consider their primitive technology: “an 8-track memory system and onboard computers that are thousands of times weaker than the phone in your pocket.”

The Voyagers were not the first probes sent to interstellar space. Pioneer 10 and 11 were launched in 1972 and 1973, each containing a Sagan-designed aluminum plaque with a few simple messages and depictions of a nude man and woman, an addition that scandalized some puritanical critics. NASA has since lost touch with both Pioneers, but you may recall that in 2006, the agency launched the New Horizons probe, which passed by Pluto in 2015 and should reach interstellar space in another thirty years.

Perhaps due to the lack of the departed Sagan’s involvement, the latest “bottle” contains no introductions. But there is time to upload some, and one of the Golden Record team members, Jon Lomberg, wants to do just that, sending a crowdsourced “message to the stars.” Lomberg’s New Horizon’s Message Initiative is a “global project that brings the people of the world together to speak as one.” The limitations of analog technology have made the Golden Record selections seem quite narrow from our data-saturated point of view. The new message might contain almost anything we can imagine. Visit the project’s site to sign the petition, donate, and consider, just what would you want an alien civilization to hear, see, and understand about the best of humanity circa 2017?

Carl Sagan Presents a Mini-Course on Earth, Mars & What’s Beyond Our Solar System: For Kids and Adults (1977)