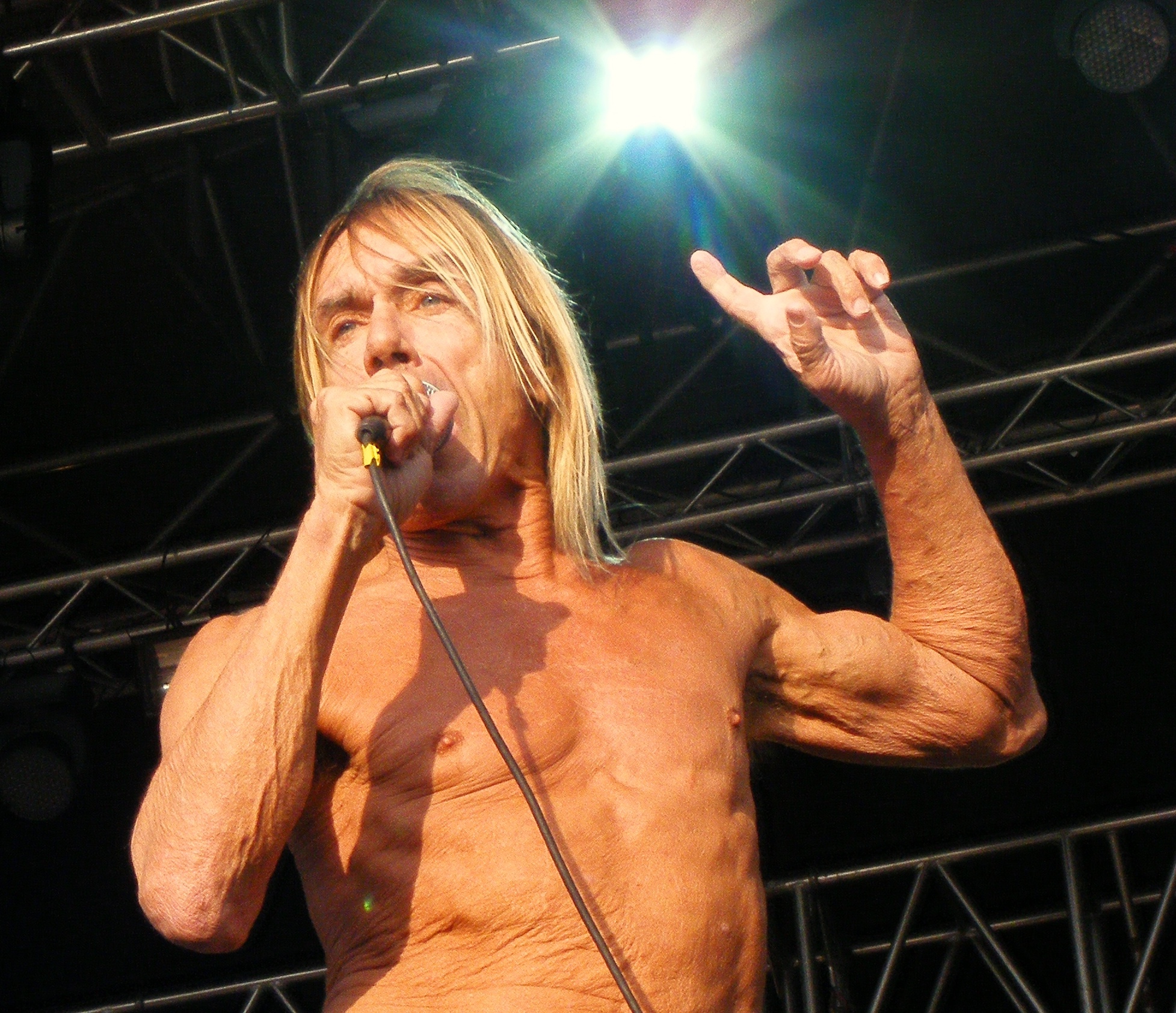 “There’s only a couple of people I’ve felt genuinely frightened taking photos in front of live because the person is out of control,” says Manchester-based rock photographer Kevin Cummins. The first was Joy Division’s Ian Curtis, “and Iggy Pop was another.” Iggy’s onstage mania rivals any lead singer, living or dead. The intimidating Henry Rollins tells a story about his one and only attempt to upstage his idol. He describes Iggy as “two guys. There’s Jim (Jim Osterberg)—‘Hey, my name’s Jim, good to meet you, man, how are you?’ And then there’s Iggy Pop,” Rollins says, and does an impression of a seething madman. “Jim is cool. Iggy is like this terrifying monster of rock and roll.”

You’ve probably heard the stories of those early Stooges gigs. Smearing himself with peanut butter, cutting himself open with broken glass and leaping into the audience long before stage-diving was something people did. We’ve also heard a lot more from Jim these days: shirtless, but “lucid, intelligent,” and displaying excellent recall in his interview with Marc Maron in the comedian’s garage; mostly clothed, bespectacled, and professorial in his delivery of the BBC’s 2014 John Peel Lecture.

In interviews and on his radio show, including a recent two-hour Bowie tribute, he is witty, gregarious, and sometimes wistful. But Iggy’s still pretty terrifying onstage even into his elder-statesman-hood. Witness the stage plan drawn up in 2006 by Jos Grain, production manager for the 21st-century touring version of Iggy and The Stooges.

we like to keep it as clear as possible, especially at the front.

This means all cables for the downstage wedges etc must be run off the front in the pit, not accross the front of the stage.

My insurance doesn’t cover me for allowing rockstars to fall off the front of the stage.

This way Iggy can run around in his customary manner like a crazed running around-type-thing and we can all relax in a haze of self-satisfied panic. [all sic]

This excerpt comes from the savagely funny, and totally bonkers, text of Grain’s “Marvelous and Most Instructive Information Document: Including Utterly Confusing Comments and Asides”— otherwise known as the contract rider, the specifications detailing the band’s requirements. “When you’re as legendary as Iggy Pop,” writes Luka Osbourne at Enmore Audio, “you tend to get away with a lot.”

Grain’s rider—a hilarious write-up prone to profane fugue states full of jarring non-sequiturs and riotous asides—pushes the genre as far as it can go. “If there was a Grammy for ‘best contract rider,’ writes Brian Mackay at the Springfield, Illinois State Journal-Register, “Iggy and the Stooges would retire the category.” A note about a guitar rack suddenly swerves into the following reverie:

Horse v Panda? I think the panda might just win it if he managed to get on the horse’s back and sink his teeth and claws into its neck. Without getting kicked in the bollocks, of course. Two hooves in a Panda’s gonads would probably bring victory to the horse, though I doubt it would celebrate much. Horses arent big champagne drinkers.
And fucking Grand Prix drivers just squirt it all over each other.

The requests get ridiculously specific, but it’s still more or less standard rock star stuff (nothing on the order of Van Halen’s “no brown M&M’s”) …or is it…? When we get down to the requirements for Iggy’s dressing room, Grain asks for:

Somebody dressed as Bob Hope doing fantastic Bob Hope impersonations and telling all those hilarious Bob Hope jokes about golf and Hollywood and Bing Crosby. Oh God, I wish I’d been alive in those days, so that Bob Hope could have come and entertained me in some World War 2 hell-hole before I went off and got shot. What joy they must have experienced…

Seven dwarves, dressed up as those dwarves out of that marvelous Walt Disney film about the woman who goes to sleep for a hundred years after biting a poisoned dwarf, or maybe after pricking her finger on a rather sharp apple… or something. What was the name of that film? Was it Cinderella? Taller people are acceptable, of course. It’s attitude, more than height, that’s important here. Don’t forget the pointy hats!

As for the band’s needs, other references to pandas come up. The bass player needs three Marshall VBA Bass Amplifiers. “Please make sure they’re good ones,” Grain writes, “or we’ll all end up as wormlike web-based life forms in the bass player’s online literary diahorrea. Honestly. He’s like a sort of internet Pepys or Boswell, except without the gout and the syphilis. For all I know.” The Stooges’ bass player, by the way, is punk legend Mike Watt, whose tour diaries really are a species of literary genius.

Sometimes when I get down about the state of rock and roll, I remember that Iggy Pop is still alive and running around shirtless onstage like a lunatic at 71. And I remember this rider exists. Read the whole thing here.