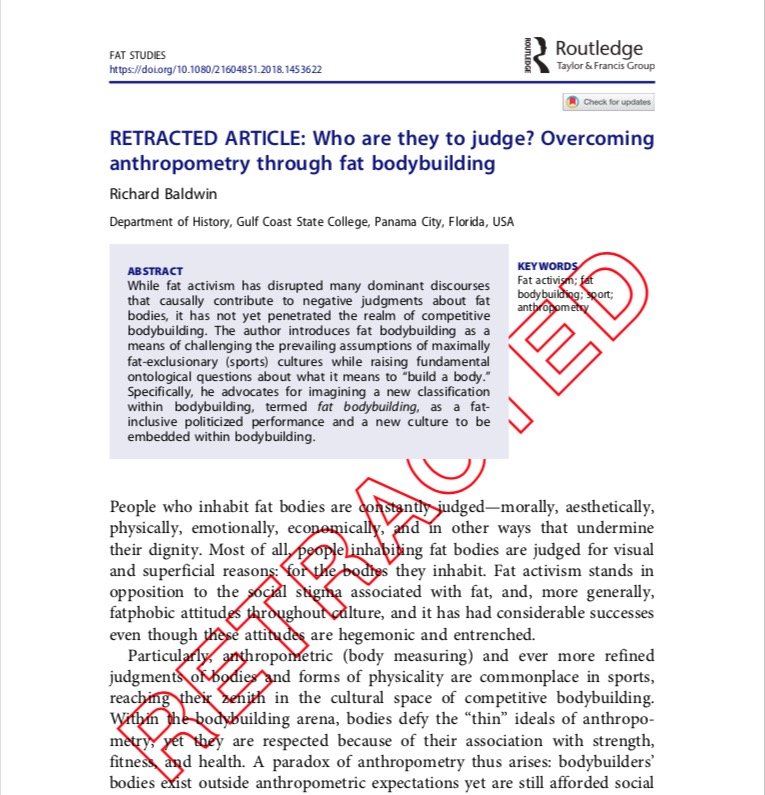 We should be suspicious when researchers assume their conclusion; when the results of an academic study merely confirm the author’s pre-existing biases. Humans are wired to seek confirmation, a cognitive deficit so deeply engrained that it can be exploited among laypeople and specialists alike. Art historians have been fooled by forgeries, historians by fake manuscripts, and paleontologists by phony fossils. Physicist Steven Weinberg referenced such high-level hoaxes in a 1996 essay in The New York Review of Books, and he placed that year’s academic scandal—known as the “Sokal Hoax”—among them.

The gist of the Sokal affair runs as follows: NYU mathematical physicist Alan Sokal suspected that post-structuralist-influenced cultural studies was jargon-laden, obfuscating BS, and he set out to prove it by authoring his own “postmodernist” text, an article full of misused terminology from quantum physics. He sent it off to the journal Social Text, who published it in their Spring/Summer issue. Sokal then revealed in another journal, Lingua Franca, that the article had been a fraud, “liberally salted with nonsense,” and had only been accepted because “(a) it sounded good and (b) it flattered the editor’s ideological preconceptions.”

Sokal’s hoax, it was roundly claimed, demonstrated that certain fashionable quarters of the academic humanities had deteriorated into babble, signifying nothing more than rigid ideological commitments and a general disregard for the actual meanings of words and concepts. Weinberg wasn’t so sure. At most, perhaps, it showed the editorial failings of Social Text. And while humanists may abuse scientific ideas, Weinberg points out that scientists of the stature of Werner Heisenberg have also been prone to slipshod, quasi-mystical thinking.

But the Sokal hoax did expose to the wider public a tendency among a coterie of academics to indulge in mystifying language, including the misuse of jargon from other fields of study, usually in imitation of French theorists like Jacques Lacan, Julia Kristeva, or Jacques Derrida—whom, it must be said, all wrote in a very different intellectual culture (one that expects, Michel Foucault once admitted, at least “ten percent incomprehensible”). For a good many people in the academic humanities, this wasn’t much of a revelation. (Sokal has since published a more thoroughly critical book with the apt title Beyond the Hoax.)

Part of the problem with his hoax as a serious critique is that it began with its conclusion. Cultural studies are rife with crap arguments, ideology, and incomprehensible nonsense, Sokal believed. And so, when his paper was accepted, he simply rested his case, making no effort to engage charitably with good scholarship while he ridiculed the bad. Which brings us to the current state of the academic humanities, and to a contemporary, Sokal-like attack on them by a trio of writers who rest their case on a slightly broader base of evidence—20 fraudulent articles sent out to various niche cultural studies journals over a year: four published (since retracted), three accepted but not published, seven under review, and six rejected.

The authors—academic philosopher Peter Boghossian and writers Helen Pluckrose and James A. Lindsay—revealed the hoax this week in an article published at the Pluckrose-edited Areo magazine. One needn’t read past the title to understand the authors’ take on cultural studies in general: “Academic Grievance Studies and the Corruption of Scholarship.” While all three hoaxers identify as left-leaning liberals, the broad-brush characterization of whole fields as “grievance studies” reveals a prejudicial degree of contempt that seems unwarranted. In the article, they reveal their motivations and methods, outline the successes of the project, and post the comments of the articles’ referees, along with a video of themselves having a good laugh at the whole thing.

This last bit is unnecessary and obnoxious, but does the new hoax—“Sokal Squared” as it’s been called—genuinely undermine the credibility of cultural studies as a whole? Is it “’hilarious and delightful,’” asks Alexander C. Kafka at The Chronicle of Higher Education, or “an ugly example of dishonesty and bad faith?” Harvard political scientist Yascha Mounk tactfully finds in it a serious case for concern: “Some academic emperors—the ones who supposedly have the most to say about these crucial topics [discrimination, racism, sexism]—have no clothes.”

This is a point worth pursuing, and certain recent scandals should give everyone pause to consider how bullying and groupthink manifest on the academic left at the highest level of prestige. But the great majority of academics are not “emperors” and have very little social or economic power. And Mounk is careful not to overstate the case. He points out how the hoax has unfortunately given welcome “ammunition” to right-wing conservative axe-grinders:

Many conservatives who are deeply hostile to the science of climate change, and who dismiss out of hand the studies that attest to deep injustices in our society, are using Sokal Squared to smear all academics as biased culture warriors. The Federalist, a right-wing news and commentary site, went so far as to spread the apparent ideological bias of a few journals in one particular corner of academia to most professors, the mainstream media, and Democrats on the Senate Judiciary Committee.

The Federalist specializes in irresponsible conspiracy-mongering, the kind of thing that sells ads and wins elections but doesn’t belong in academic debate. The question Mounk doesn’t ask is whether the hoaxers’ own attitudes encourage and share in such hostility, an issue raised by several of their critics. As physicist Sean Carroll wrote on Twitter, “What strikes me about stunts like this is their fundamental meanness. No attempt to intellectually engage with ideas you disagree with; just trolling for the lulz.” McGill University political theorist Jacob T. Levy expressed similar reservations in an interview, notes The New York Times, saying

even some colleagues who are not fans of identity-oriented scholarship are looking at the hoax and saying ‘this is potentially unethical and doesn’t show what they think it is showing.’ Besides, he added, “We all recognized that this kind of thing could also be done in our disciplines if people were willing to dedicate a year to do it.”

Therein lies another problem with Sokal Squared. Hoaxes have been perpetuated by smart, dedicated forgers, con-artists, and pranksters in nearly every field, showing up all sorts of experts as potential dupes. The singling out of cultural studies for particular ridicule—the characterization of studies of race, gender, disability, etc. as “grievance studies”—reveals an aggrieved agenda all its own, one that ignores the serious problems corrupting other disciplines (e.g. industry funding in academic sciences, or the gross overuse of undergraduate students as the main subjects of studies—groups that hardly represent the general population.)

Some, but not all, of the successfully-published hoax papers sound ludicrous and terrible. Some, in fact, do not, as Justin Weinberg shows at Daily Nous, and should not shame the editors who published them. Some of the journals have much higher editorial standards than others. (An early hoax attempt by Boghossian targeted an ill-reputed, pay-to-play publication.) The whole affair may speak to broader failures in academic publishing that go beyond a tiny corner of the humanities. In part, those failures may stem from a general trend toward overworked, underpaid, increasingly precarious scholars whose disciplines, and funding, have been under relentless political attack since at least the 1990s and who must keep grinding out publications, sometimes of dubious merit, as part of the overall drive toward sheer productivity as the sole measure of success.